“Everywhere you look; it’s a feast for the eyes.  It’s a magical place.” 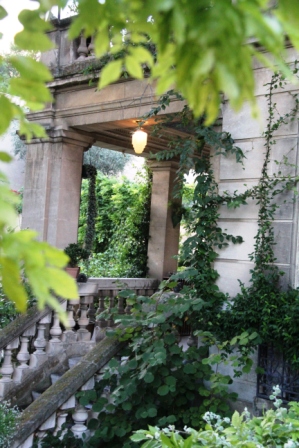 We were sitting around the fireplace in a stylish salon of exquisite furnishings enjoying an apero when a friend made that comment.  It was our first time at the Villa Augustine shortly after it opened in April 2012. 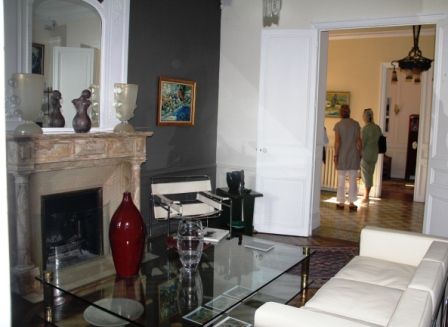 The turn-of-the- century mansion in the Vaucluse city of Apt, the capital of the Luberon, was originally owned by a wealthy family, proprietors of ochre mines.  Their fortune plunged in the 1930s. 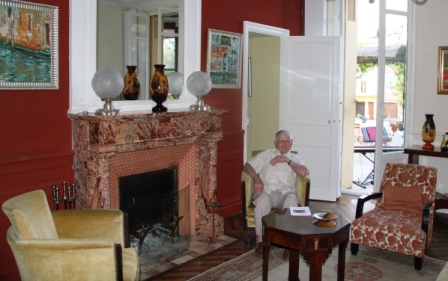 The splendid home was abandoned for many years and in a dreadful state. Along came two Parisians, Guy and Christophe, to rescue the magnificent structure.   Restoration took three years.  Tracking down the furnishings and objets d’art took even longer. 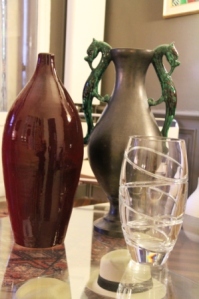 Guy and Christophe, both fans of  20th century arts décoratifs, combed France and neighboring countries to find original Art Nouveau pieces to enhance the interior in keeping with the period. Signed objects by Majorelle, Ruhlmann, Leuleu, Royere and others are among the treasures.

Today Villa Augustine is a sanctuary of calm and beauty in the midst of busy Apt just above the river Calavon.  There are five chambres d’hote (B&B) rooms and gorgeous gardens planted with Italian inspiration.  A more than 200-year-old cedar of Lebanon, classified as one of the most beautiful trees in the Luberon, is the pièce de resistance amidst flowers, cypress and olive 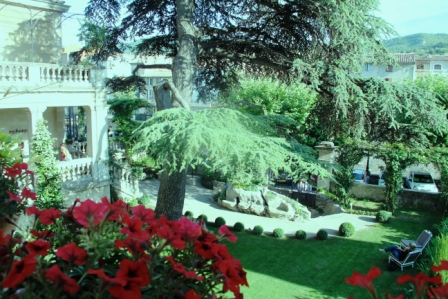 trees.  An inviting pool on a terrace above the villa is a delightful surprise offering stunning views of Apt and the Luberon hills.  Not to forget – food, which is Guy’s realm.  The ex-banker has always been passionate about cooking.  Here he has the opportunity to indulge in his favorite pastime and prepare gourmet cuisine several evenings per week.  His cuisine, he says, is influenced by his Spanish origins and Algeria, where he was born.  And, the flavors of Provence, of course. There is a set menu, and reservations are a must as he can serve no more than 20 diners, but up to 40 for special events.  During warm weather months, the spacious terrace in front of the villa is often a venue for the latter – concerts, fashion shows, art and photo exhibits. 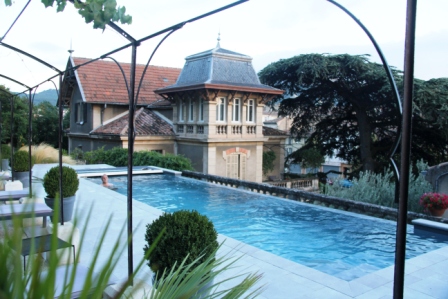 During our first visit we had a complete tour and admired each unique bedroom with adjoining baths, many delightfully retro.  A mirror from a buffet is the headboard for the double bed in one room.  One bedroom is done in the style of the ‘50s, and another reflects the ‘40s. 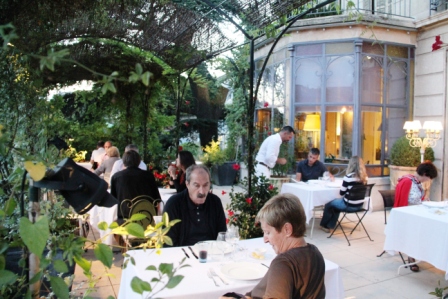 Dinner – either outdoors under trellises on the terrace where huge pots of plants in bloom create an upscale  ambience of greenery, or indoors in the dining room with its precious décor, is special. 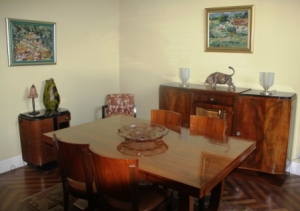 So is the food.  Our first dinner in 2011 featured Noix de Saint-Jacques a l’artichaut et l’andouillette, jus de
crustaces, (scallops à l’ artichoke and sausage with the juice of crustaceans).

Last week we savored an excellent meal – a belated birthday treat for step-daughter Kellie and her friend Luka visiting from New York City.  It began with  a “mise en bouche”  (pre-starter), a healthy gamba with a puree of mango 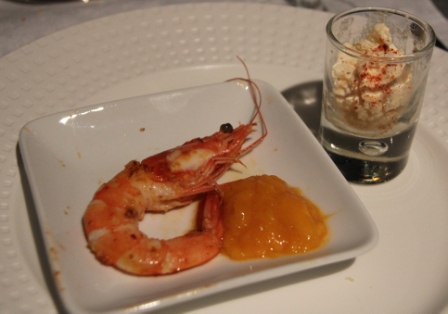 and a mini glass filled with chantilly (whipped cream) of chevre (goat cheese).  The entrée, carpaccio of tuna with a spinach sauce, was very flavorful – my favorite. 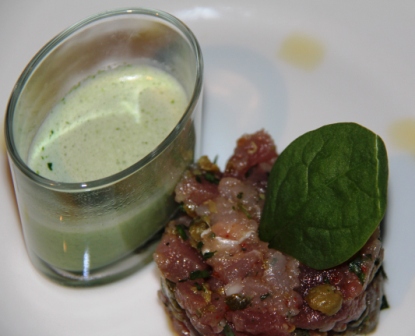 Cod with ratatouille creatively stuffed in mini peppers accompanied the perfectly cooked fish surrounded by a coulis of tomato and juice of palourde (tomato sauce made with the juice of the clam perched on top of the cod). 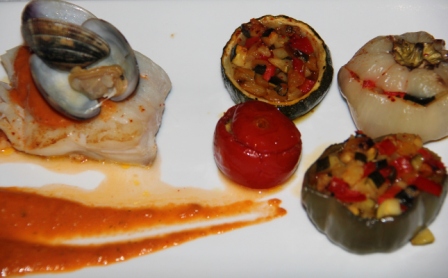 Dessert:  roasted figs in fig liqueur with vanilla ice cream.  Wine:  a bottle each of an excellent Burgundy white and a Burgundy red suggested by Christophe.  A fitting birthday meal in a magical place!

Guy and Christophe, who  had the distinction of being the first gay couple married in Apt after the recent change in French law which now legalizes gay marriage, are overjoyed with the success of their endeavor.

“We are very happy with the speed in which we have succeeded to develop a faithful clientele,” says Guy.  The chambre d’hote has been fully booked since April this year, he added.  “Normally this would take four or five years.” 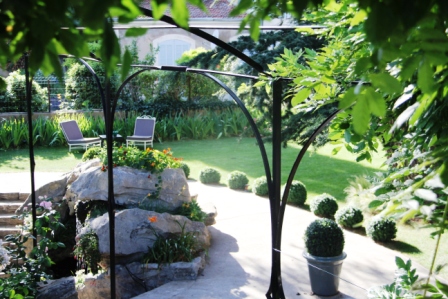 Rooms range in price from 100 to 150 euros per night.  Three course dinners with two mise-en-bouches  at 40 euros per person. Villa Augustine is open from mid March through the end of October. More information at www.lavillaaugustine.com 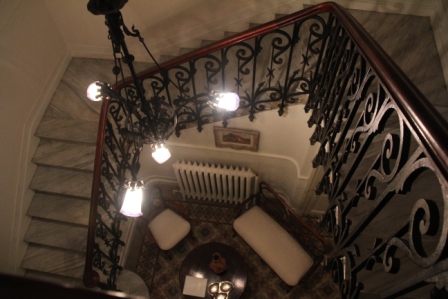 Have you dined at Villa Augustine?  Share your view.  I love to hear from readers.  See “Leave a Reply” below under Comments. Followers also welcome.  Don’t miss future posts.  Click on Email Subscription at top right.

A recipe to try:  Linguine with Shrimp, Tomatoes and Feta Sabraw.  Scroll down recipe column at right. 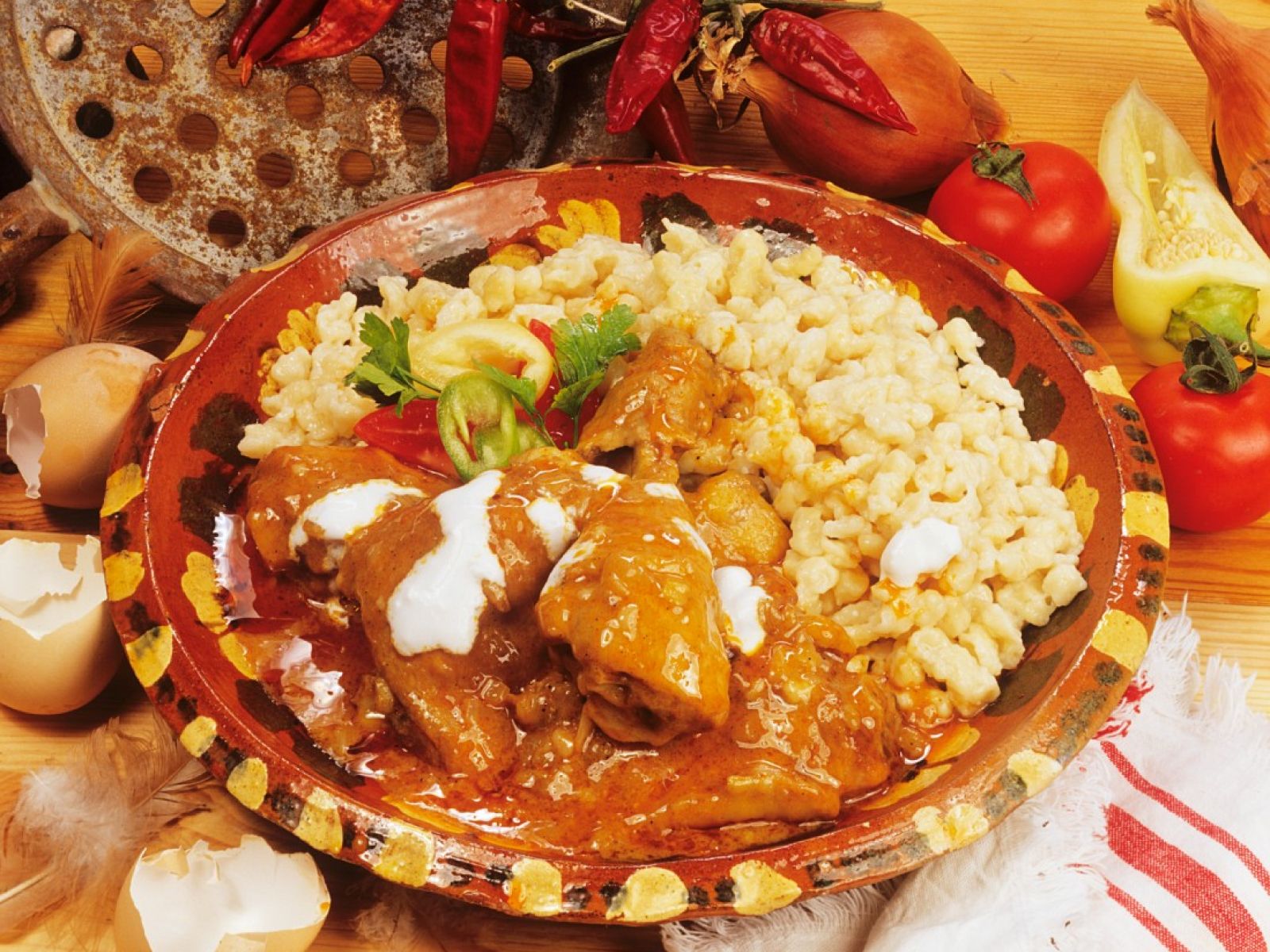