Skip to content
It was a year of monumental change for us. We sold our lovely home in the Luberon hills of Provence in record time (2 days), did some serious downsizing and moved to an apartment on the French Riviera. Emptying that house of at least 75% of the contents at flea markets, online sales and more was a demanding challenge. So was finding a new roost. But, we did it all and here we are. The apartment is spacious with a to-die-for view of the Med and mountains. At night, it is magic. Life is less complicated. We are closer to commerce. And, a beach where I look forward to Med swims when the weather warms. And Italy, just 20 minutes away where we love to shop. Benissimo!

Four mainly outdoor cats accompanied us. We could not abandon them. Pets are a

lifetime commitment, not to be tossed out if inconvenient. That, too, has been challenging, but now we are down to three felines. My precious boy Adam was peacefully euthanized on 1 Dec. (age 14, cancer). We miss him. He was special.

Not monumental, but a milestone. I am now a French citizen — and an EU citizen. (lots of paperwork, perseverance and patience) I will not relinquish my American passport, but have dual citizenship. Vive la France!

Part II of our Egypt adventure was a beach holiday following the Nile cruise. Interesting.

I booked an all-inclusive package at a French travel agency and expected we would be at a mainly French hotel. Surprise. Instead of speaking French, I needed my German. Ninety percent of the hotel guests were German. The huge hotel (505 rooms) was sold to a German company in 2017, I learned. Hurghada on the Red Sea is a popular beach vacation destination. Until the 2015 crash of a Russian passenger jet brought down by a bomb over the Sinai, Russians were the primary clientele. No longer, and due to this and other terrorist incidents in Egypt, international travel took a hit. Those intrepid Germans were the first to return, but last year many others followed. Tourism was bouncing back. However, the recent attack on a tour bus near the Gaza pyramids will not help which is tragic. Egypt needs tourists. We felt very safe during our travels.

Our hotel was not in Hurghada, but on a section of beach about 45 minutes  from the town.    Large hotel after large hotel, all with mainly German guests, line the shore. Deutschland can be bleak with too little sun as we know from the many years we lived there. It is no surprise that Germans are known to seek the sun on holiday.

Having had a cancerous bump (basal cell carcinoma) removed from my nose, I try to avoid those tanning rays. I was surprised. Most hotel guests had no fears of the sun. They bake, hour after hour. Some of the tans outdid those old Coppertone ads.

What to do if you don’t want to broil all day? There are organized beach games, a variety of excursions, scuba diving. On a previous trip to Dubai, we had done a desert tour. During our cruise, we visited the sights of Luxor. No need to repeat those. I signed up for a snorkel trip with the intention of moving on to scuba. But, the snorkeling was not that exciting. I feared a beginner’s scuba trip would be about the same. I passed.

We also passed on a visit to Hurghada since we had heard it did not offer much – mainly more hotels. We did take a taxi to a shopping center which was much like a shopping center anywhere, but had a genuine Egyptian restaurant.

That was a plus. One day we went for a long walk along the beach, the hotel strip, assuming we would come to a restaurant for lunch. Nothing. All the restaurants are part of hotels, for hotel guests only.

There is no shortage of food on these all inclusive package tours. Copious buffets are offered three times per day. All kinds of food. It is astonishing how much some folks put away, plate after plate. Snacks are available between meals. Beverages, including wine, beer and cocktails, are also included. Caipirinha were popular at the bar in the middle of the swimming pool

Our hotel had two main restaurants, a huge hall with a terrace and a large outdoor beach restaurant. And, a courtyard with specialty restaurants (Chinese, Italian, Burger etc.) which you could book ahead for dinner. We tried them all. Overall the food was not bad, but not great. Our shopping center lunch was our favorite. It seemed like real Egypt.

I talked to a couple from Niedersachsen, Germany, on their fifth winter visit to Hurghada. “It’s reasonable. It’s warm. We are happy here.” So are thousands of other tourists who fill the 175 hotels in Hurghada which provide jobs for some 200,000. Average salary is about 70 euro per month.

Hurghada, called a “touristic hotspot” by one publication, is booming with more hotels under construction. For the sun and sea and all you can eat, it’s a deal. But, we much preferred our week on the Nile to our week on the Red Sea.

Words of wisdom for 2019 from my hero and inspiration, the late Anthony Bourdain:

“If I’m an advocate for anything, it’s to move. As far as you can, as much as you can. Across the ocean, or simply across the river. The extent to which you can walk in someone else’s shoes or at least eat their food, it’s a plus for everybody. Open your mind, get up off the couch, move.”

We will get off that couch and begin 2019 with adventure:  the US then Costa Rica. 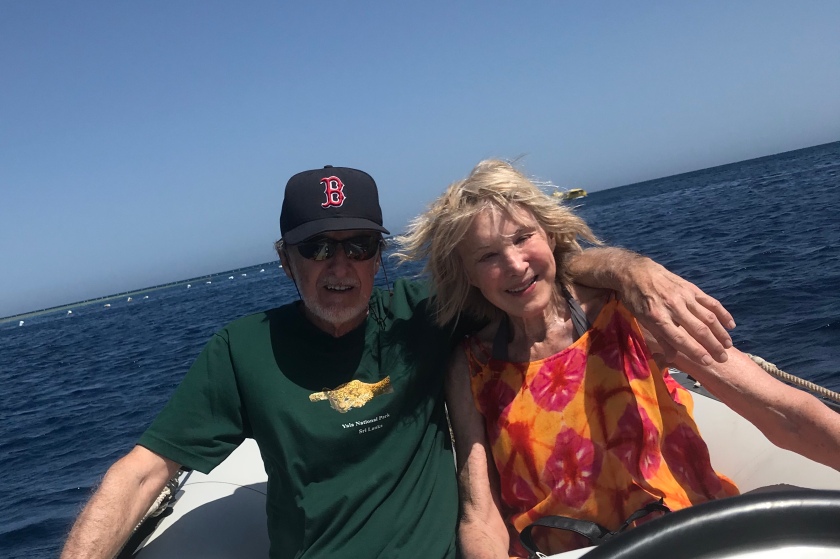 At last, a new recipe. Broccoli Parmesan Gratin is worth a try — even if broccoli is not on your favorites list.  See top right.

If not a talesandtravel, follower please sign up (upper right).  Your address is kept private and never shared.  Rajasthan, India,  coming soon,