First stop, Winchester, Virginia. Stepson Rob and grandsons Samuel and Lang live outside the city in a lovely country location below the ridge of Big Schloss Mountain, part of the Appalachian chain. Their house, which we had not seen, is spacious and tastefully decorated by Rob – with a few treasures from Germany donated by his father.

Rob drove us around the picturesque area with stops at the Muse Winery Swinging bridge on the Shenandoah River and a visit to the Woodstock Brew House in the town of Woodstock,  Va. The artisanal beer was a treat, as was another German favorite,

sauerbraten at a German restaurant in nearby Harrisonburg

On the way home from dinner we passed a Krispy Kreme donut store. They were excited. The red light was on. ?? We learned this means donuts are coming off a conveyor belt to be doused with glaze. Purchase them fresh and warm and enjoy on the spot. “You will love these,” they insisted. The boys had more than one each…   Bob and I failed to share their love of Krispy Kreme. We’ll take croissants, merci.  But, good to know about that red light. And, the German dinner was wunderbar.

Bob spent several days with Rob and the boys, then flew on to Ohio for a reunion with six of his seven brothers and sisters, as well as many nieces and nephews. They had a belated b’day celebration for Bob, 80 last October.  I flew west to San Diego for a reunion with some of my family.

My brrother Tom, who now lives in San Francisco, wanted a reunion in San Diego where he had worked for several years. Brother Steve and sister-in-law Yoshie came from Boulder. Nephew David and his mother Joan came from Kentucky. Missing was brother Dave, Joan’s husband and David’s father, who had work commitments and could not join the fun.

Tom was our guide. He made sure we visited famed Balboa Park, his beloved Coronado, downtown landmarks and more. Thanks to nephew David, who combined business with pleasure, we were

chauffeured in style. His rental car was upgraded to a gleaming, cherry red Cadillac. A tight squeeze, but we all piled in for a scenic ride up the coast to La Jolla where we took lots of photos of seals.

More seal photo opps awaited on our sailboat adventure with Captain Charley in the San Diego Bay. We enjoyed superb views of the city skyline, sailed past the Naval Base, and, in addition to seals, watched dolphins training to detect mines. All beautiful, fun and relaxing, until Joan realized her Iphone was missing — not to be found on board. It obviously had disappeared overboard. Although the phone was insured,  most of the photos had not been backed up.  Lesson learned: back up all.

Balboa Park, San Diego’s “cultural heart” with 17 museums, gardens, the city’s famous Zoo, plus stunning Spanish-Renaissance architecture, is impressive. Tom recommended a visit to the Botanical Building with more than 2,100 permanent plants, including collections of tropical plants and orchids. Alas, it was closed for cleaning. Instead we went to the Japanese Friendship Garden.

Yoshie, who is Japanese, enlightened us on many aspects of this marvelous garden with its streams and pools where vibrantly colored Koi (Japanese carp) swim. 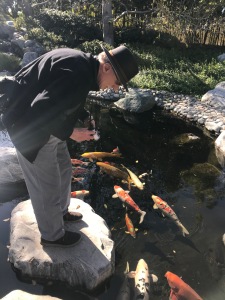 My favorite part of the San Diego visit was the Ocean Beach street fair. It is a regular happening, we learned, a feast for foodies with a range of international culinary treats: Mexican burritos, Chinese steamed buns, paella, lobster rolls, tangy East African specials, pizza – even crème brulee. Plus – lively music — and  dancing in the street. Tom and I joined the dancers.

We ended California family fun at the beach in Coronado watching the sun set with a Margarita in hand. All agreed. We should have these reunions more often.

Scroll down for more of the family photo album.

Coming soon:  Rajasthan, the best of India, and then, Costa Rica, which followed this US trip.  If not a talesandtravel follower, sign up, upper right.  Your address is kept private and never shared.

Don’t be shy.  Please comment.  Click below and add your thoughts. I love feedback and hearing from friends and followers

11 thoughts on “Family Fun in the USA”