They loved it and wanted the recipe — friends who came to lunch recently. It’s a recipe I clipped from a magazine long ago. It originated at Larry’s Markets in Seattle and was touted “as one of the best soups I’ve ever tasted.”  Seems my friends agreed.  It calls for two American ingredients I cannot find in southern France:  canned black beans and canned pumpkin. Creative cooks can come up with subsitutions.  But, I have a supply I’ve stashed away from trips to Germany to visit friends Gayle and Ralph who lived there and would take us to mecca, the U.S. commissary on a military base.  Step-daughter Kellie also sent us cans of coveted pumpkin in a Christmas package. Gayle and Ralph have since joined us in France, but still have friends in Germany who let them shop for these American treasures.  They recently returned from a shopping visit and brought us a shipment.  Thank you Gayle and Ralph — and  Kellie. 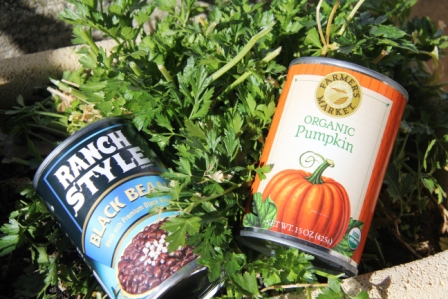 Never miss an opportunity to put a cat in a photo: Fabulous Filipo

In a 6-quart heavy kettle, cook onion, shallot, garlic, cumin, salt and pepper in butter over moderate heat, stirring until onion is softened and beginning to brown.  Stir in bean puree.  Stir in broth, pumpkin and Sherry until combined and simmer, uncovered, stirring occasionally, 25 minutes, or until thick enough to coat the back of a spoon.

Just before serving, add ham and vinegar and simmer soup, stirring, until heated through.  Season soup with salt and pepper.

Comments on recipe welcome.  Let me know if you like it.