He’s known as the “jungle dentist.” Danish oral surgeon Peter Bloch began coming to Bali 43 years ago. During visits he realized the need for his skills among the local population living in rural areas.  He equipped a boat to be a dental clinic on water, then sailed around the island, making stops at remote villages and offering his services to those in need. 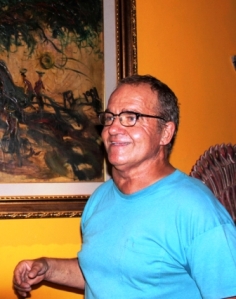 “Having a toothache is the worst pain,” says the dedicated dentist.  “You can’t sleep.  You can’t eat. You can only cry.”  Without dental care, decayed teeth can become infected.  Sepsis can set in and can lead to death, he explained.  ”It’s a common way of death here.”

Bloch, who had a practice in Fort Myers, Fla., for 19 years, as well as a part-time practice in Denmark, would spend two to three months a year as a volunteer “jungle dentist,” seeing as many as 60 – 70 patients per day.  “We used an upside down canoe as a dental chair,” he says.

He now lives at his magnificent resort, Tanah Merah (red earth), four kilometers outside of the Bali town of Ubud, but still practices jungle dentistry several months of the year.  He also gets patients from Ubud where he operates under the slogan “No Pain, No Pay.”

But these days most of his energies are directed to Tanah Merah, a secluded paradise in a luxuriant tropical setting.  Our stay there was the highlight of our recent six-week trip which took us on to Australia and New Zealand. 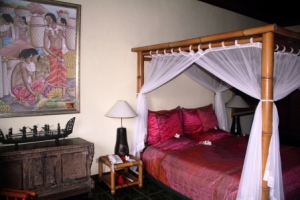 construction in 2000.  There are now 17 rooms, including some individual cottages and luxurious villas.  The latter have private plunge pools, some even with waterfalls.  We had a deluxe studio with a canopied bed, private terrace and enormous bathroom with a giant, gleaming copper bathtub.  We visited several other rooms and villas.  Bloch, who designed all the rooms 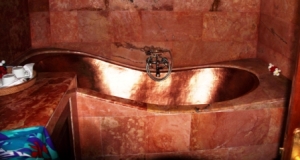 himself, did not stint on the bathrooms – all lavish and spacious.  Fascinating art objects and paintings from his private collection add elegance to the guest rooms.

Collecting these treasures is the jovial Dane’s passion.  “I am constantly collecting.  It’s terrible. It’s a disease,” he says. Because of his work on Bali and his hobby of collecting, Bloch is well known on the island.  Owners of palaces who are in need of funds contact him when they have treasures to sell.  Museum directors also know he is interested in art objects.

He recently opened a museum at the resort, nine rooms, each behind heavy, 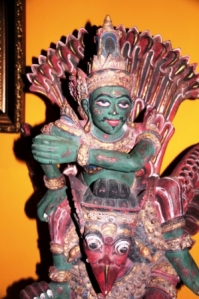 elaborately carved wooden doors, and all underground in a temperature-controlled environment.  The contents —  priceless, amazing and unusual objects — include paintings, weavings, objects of gold, daggers, masks and carved furniture.

One room features a large collection of Chinese porcelain from the Yuan dynasty (1271 – 1368) all recovered from a shipwreck.  The star attraction in another room is gigantic tusks.  According to Bloch, the former president of Indochina, Suharto, wanted a set of tusks from a mammoth. He got them from Russia and sold them to Bloch after he lost his presidency and was in financial need.  The tusks have been tested and are said to be 28,000 years old. 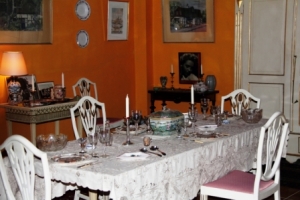 The highlight of the Bali room is a 400-year-old Indonesian structure which he had reassembled.  From Europe, there’s his mother’s dining room recreated from furnishings from the family home in Denmark, complete with a lavish table setting.

“It’s fun.  It’s a beautiful atmosphere.  I like to sit here and read’’ he says of the museum.

He also likes to wander the grounds of his resort.  Steps lead up and down the verdant hillside with its colorful blossoms and lush foliage.  There’s an infinity 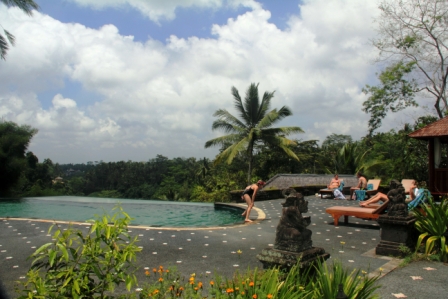 pool at the edge of a cliff with fabulous views of the surroundings.  Exotic birds live in cages around the area of the individual cottages.  Noisy frogs thrive in a spring-fed pond adjacent to one of the resort’s three restaurants.

A staff member told me Bloch likes to get up early and make the rounds of the bird cages, talking to his feathered friends. He might be accompanied by his dogs, three very friendly Rottweilers.

The resort complex is large so you rarely see other guests.  On most occasions I had the pool to myself. Even husband Bob, a non-swimmer who normally avoids

pools, could not resist a dip in the inviting water. For a jungle experience, you can trek down to the river and swim in a pool under a waterfall.  Unfortunately I saved this for our last day when it rained, making the descent to the river too slippery.

The many stone statues of gods and spirits throughout Tanah Merah add to the almost mystical, enchanting ambience of this romantic resort.  Young Balinese women clad in vibrant sarongs place fresh offerings of flowers at the statues each morning.  I’m not a big fan of 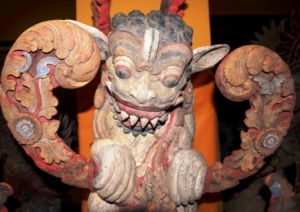 massages, but I indulged at Tanah Merah for the best massage of my life.  The breakfasts, the English version with eggs and meat, as well as fresh fruit and croissants, are the perfect way to start the day at the open restaurant Petanu, half way down the hillside amidst the jungle greenery.

The town of Ubud with shops, restaurants and a thriving market, is about a 15- 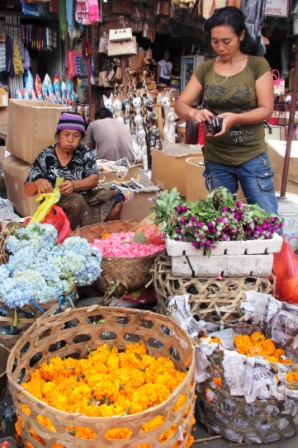 minute drive from the resort.  Tanah Merah offers guests free shuttle service to town, but if the resort cars are not available, you can hop on the back of a staff member’s motorcycle for a fun trip.

Bloch likes to mingle with his guests and can communicate in numerous languages: Danish, English, French, German, Swedish, Swahili, Indonesian and Balinese.  He has lived in Singapore, and Africa where he opened a dental clinic in Nairobi.  He is divorced with two children and a grandchild who live in the U 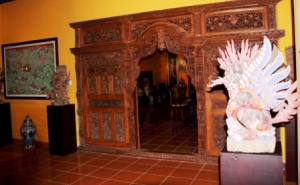 . S.   In addition to dentistry and collecting art works, he writes and is especially proud of his recently published book, “Mads Lange, The Bali Trader and Peacemaker,” the story of this Danish expatriate who lived in Bali in the 19th century and was influential in the island’s history.

Before leaving, I decided to ask the jungle dentist about a dental problem and related headaches.  He invited me to his private villa at the resort where I lay on a couch on the porch with lots of pillows behind my head.  His houseboy held a surgical light above my mouth while the dentist took a look at my teeth and gave his advice which I’ve since heeded with good results.

Our deluxe studio at Tanah Merah in October was $100 per night, including breakfast.  For more on the resort, see   www.tanahmerahbali.com