And the winner is — Yvonne Rouvinet. The competition: Geraniums.

Grimentz, a tiny Swiss hamlet high in the Anniviers Valley in southern Switzerland, is the Shangri-la of geraniums. The fiery red blossoms are the village claim to fame – brimming from boxes on houses, apartments, hotels, shops. Tourists clog narrow cobblestone lanes with their cell phone cameras.

Every August the village sponsors a geranium contest. This year there were over 170 entries in three categories: apartments, businesses and chalets. Rouvinet took top honors in the apartment category, beating out 130 other competitors.

Grimentz, a quintessential Swiss village,  was my destination for a solo mountain break. Husband Bob stayed home with his daughter who was visiting.  I miss the Swiss Alps where Bob and I had so many amazing adventures. We biked, with panniers, six of the country’s nine national bike routes. We hiked, often spending nights in gemütlich mountain lodges and huts. We skied its challenging slopes. I enjoyed several terrific press trips to different parts of the country. Those were the days. We were younger and very fit.

At times it was all too nostalgic. I could not hold back the tears when I saw cyclists loading their bikes on the trains. How many times had we done the very same thing? I hate growing old. I still yearn to soar down black runs (red would do), hike to high peaks, bike those three remaining Swiss bike routes. Merde!

Reality really set in when I set out on a hike which the guy in the tourist office recommended as “flat and easy” – supposedly an hour and half trek to the Hotel Weisshorn. I rode the funicular from St. Luc to the start of the trail. I had a backpack, but unfortunately no hiking poles. The trail was stoney. From the onset, there were ups and downs, not steep, but not my idea of flat. I progressed slowly, stopping to take photos. This was the Planets Trail with markers for the various planets along the way. After about 45 minutes I reached a large clearing where an imposing planet-like structure stood at the edge of the mountain. A woman sat on a bench underneath. I approached and asked her about it.

“Saturn,” she answered. I told her I was on the way to the Hotel Weisshorn. “Oh, it’s up there,” she said, pointing to a distant building atop a mountain. No way. This was not a “flat, easy hike.” I was devastated. I was already tired and my knees hurt.

Marie Claire is from Belgium and has been coming to nearby Zinal every year for many, many years, this time with a son.  Her husband died in 2006. She hiked to the hotel two years ago, but intended to take a pass this year and head back down. Her son had charged ahead.  She invited me to join her for the descent. She saved me, lending me one of her hiking poles.

We talked about our old and broken bodies. She has two knee replacements. I have one. We both have hip tendinitis. I have a decaying back. Marie Claire was also an inspiration, very positive about everything. “You have to keep moving.”

I failed at the Weisshorn hike, but certainly I could master the hike around Lake Moiry. Clement Vianin, a Grimentz native and the manager of the charming Hotel Meleze where I stayed, suggested I take the bus to the Moiry glacier, then hike the trail around the lake to the dam and bus stop at the other end. Bravo. I did it.

Like all mountain glaciers, this one has suffered from climate change and has receded significantly.

The lake is a marvel of intense, vibrant turquoise. Minerals from the glacier’s melting ice give the lake its gorgeous hue.

I relished hiking around the lake at a snail’s pace, stopping for lots of photos. I even tried macro on some wildflowers. This is the Switzerland I love. 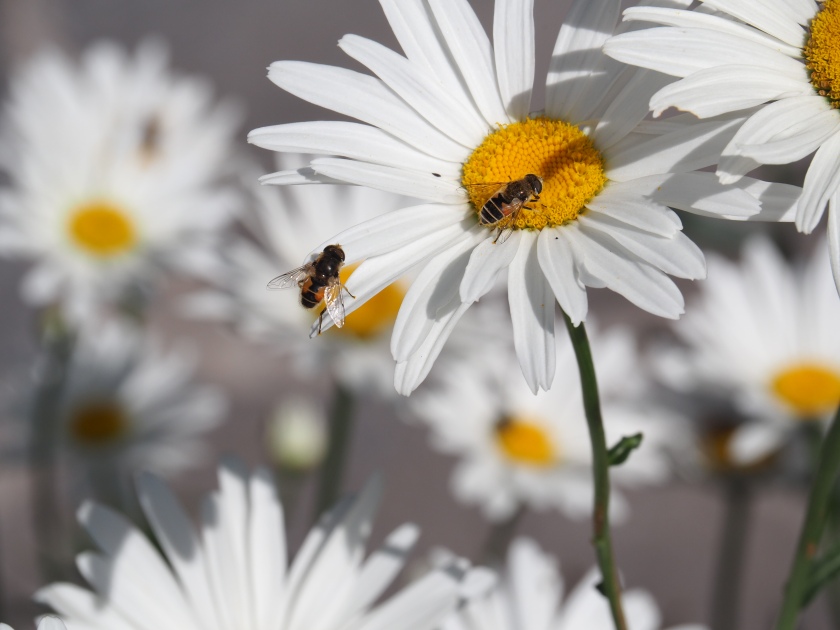 I was in heaven the first night when I entered the cozy, woodsy restaurant of the Hotel Meleze permeated with the aromas of Switzerland – fondue and raclette. I ordered one of my favorites, the deluxe version of Croute au Fromage, bread topped with ham, Gruyere and an egg, baked so the cheese melts and the egg cooks. This called for several glasses of Fendant (Swiss white wine). During my visit I indulged in other Swiss favorites, Rosti, grated potatoes with any melange of other ingredients. I chose one with lots of melted cheese and an

egg. I had another cheese bombshell, a Risotto speciality at the Becs de Bosson restaurant. Parmesan is pounded smooth in a big bowl as you watch. Grappa is added, then the hot rice. That was my Swiss cheese farewell. I savored it all, but by then I had had enough cheese and was ready for a return to fish from the Med.

Back to those geraniums. I plant them every summer, but mine never looked like those in Grimentz. “It’s the climate,” Rouvinet said. “Not too hot. That is not good.” She also pointed out that the old dark wood of the village buildings “gives a good effect” to the geraniums. Many of the ancient houses date from the 13th to the 15thcentury.

The villagers use a special fertilizer for geraniums. They caution against over-watering. Dead-heading the faded blossoms is also critical. Many chalets and apartments in Grimentz are not occupied year round. Thirty village volunteers visit unoccupied residences to care for the flowers.

Grimentz is in the French speaking part of Valais, a  bi-lingual canton in Switzerland.  The town, elevation 1,570 meters, is a ski resort as well as a geranium Mecca. It has just 450 permanent residents, but the number skyrockets to as many as 4,000 in winter when  skiers arrive. Summer and geraniums bring almost that number, but many just come for the day to admire red blossoms and take  photos.

Scroll down for more photos. 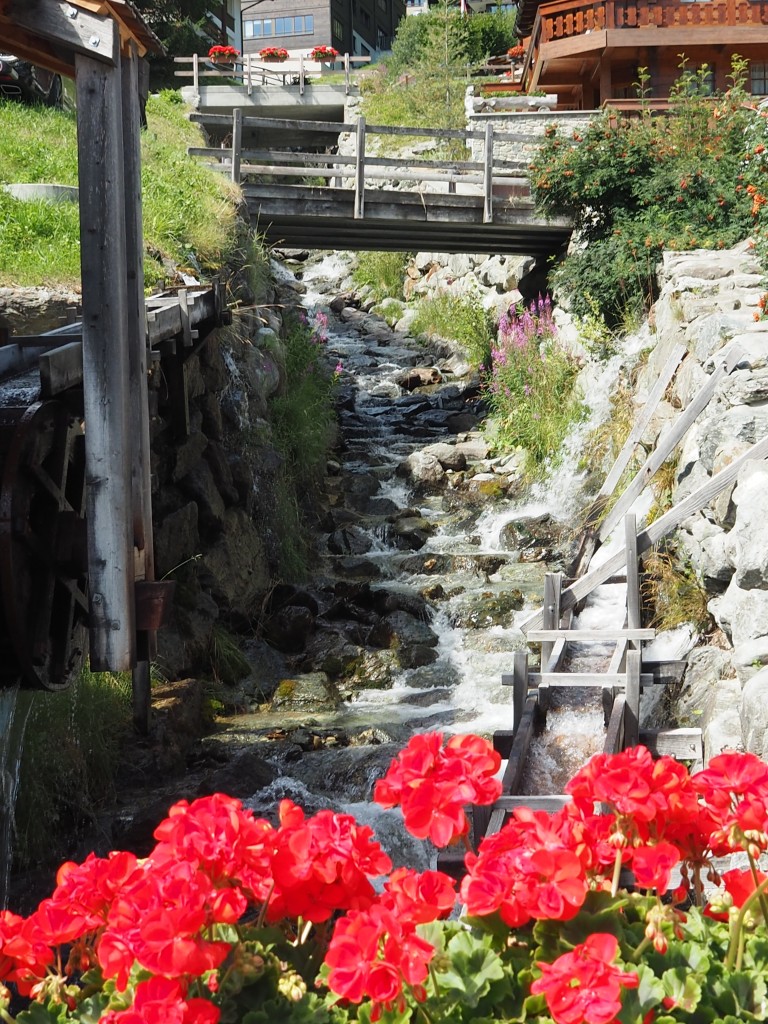 Please continue to scroll down and leave a comment.  I love feedback — good and bad.  If not already a talesandtravel follower, sign up, upper right.  Your email address is kept private and never shared.  Recipes —  check them out, right column.  New one coming soon.