I wrote the following for the newspaper Stars and Stripes three years ago after a visit to Nice.  I’ve been back several times, most recently after Christmas.  This time we lounged on the beach, enjoyed delicious food, and soaked up that seductive ambience of the Cote d’Azur.  Nice — it’s my kind of town..

After many, many years in Germany, my husband and I and our two cats (we now have three) left Deutschland behind and moved to the hinterlands of Provence in southern France. We’ve been here five years (now eight), and it’s lovely. We don’t regret the move. But I’ve found a corner of this part of the world I like even more: Nice.

Our quiet life in the countryside has its pluses, but I miss the vibrancy and excitement of a city.  Nice offers that, as well as the sea and beaches, museums, markets, intriguing old town, excellent restaurants, lush parks and outstanding architecture, all wrapped in an enchanting ambience. 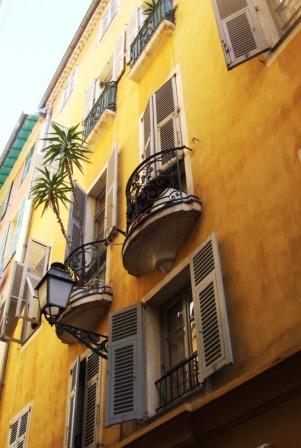 France’s fifth largest city is the capital of the glamorous French Riviera.  There’s plenty of elegance along the Promenade des Anglais, its seaside boulevard lined with palms and turn-of-the-century hotels and grand apartments.  There are traces of North Africa in the tangle of dark alleys of Vieux Nice, (old Nice). The outdoor markets and restaurants, as well as the numerous street stands, capture the flair of neighboring Italy. It’s an irresistible mélange.

Nice’s roots go back thousands of years to prehistoric times. By the 4th century it was settled by Greeks, followed by Romans, then Saracens. Nice was part of the House of Savoy (Italy) from 1388 until 1860 when citizens voted to join the Second French Empire.

The English discovered its charms in the 18th century, followed by those from other countries, especially Russians.  The Cathedral of Saint Nicholas, commissioned by Czar Nicholas II and inaugurated in 1912, is the largest Russian religious edifice outside Russia, and a top tourist attraction.

By the 19th century Nice had become a favorite winter haunt for the British.  It was an Englishman, Reverend Lewis Way, who is responsible for widening a former water front footpath in 1820 at his expense which was dubbed “Chemin des Anglais” (road of the English). In 1931 it took its final form, two roads with a palm-planted center strip, and became known as the Promenade des Anglais.

On one side of the famous avenue are Belle Époque buildings. On the opposite side are miles of beaches.  Thanks to Nice’s microclimate, even in winter you can sit at a beach café and soak in the rays.  You may even see brave souls who spread their towels in the sand and sunbathe in bathing suits.  In summer, of course, the beaches are crowded with both tourists and locals. 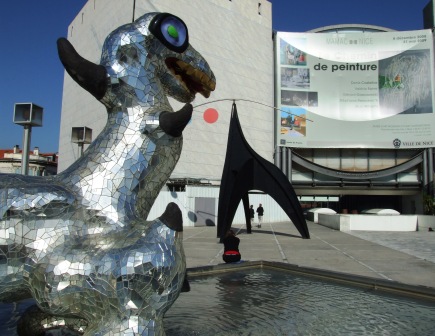 During our winter visit, after a stroll along the beach we climbed the steps to Castle Hill where a citadel once stood.  It’s now a maze of greenery, perfect for getting some exercise and enjoying superb views of Nice, its beaches and harbor, with the backdrop of hills and the distant Alps.

We took the easy way down, riding an Art Deco lift which deposited us on the edge of Vieux Nice. I love taking pictures at the flower market on the Cours Saleya in the heart of the old town.  I also love wandering in the labyrinth alleys in this part of the city, checking out funky boutiques, admiring Baroque churches, taking more pictures. One place that has become a favorite is Oliviera, a shop with 17 different kinds of olive oil where owner Nadim Berouti is happy to offer tastings.  The shop also has a mini-restaurant.

“When I understood that every morning I would see again this light, I could not believe how happy I was,” artist Henri Matisse wrote about Nice.  The light of the Riviera has inspired numerous artists, not just Matisse who lived in the city from 1917 until his death in 1954. A Nice museum devoted to his works is a must.

We rode a bus up the hill to the Cimiez district where the museum is located in a 17th century Genoese villa.  Works from every period of the artist’s life are on display, including early paintings, the famous gouache cut-outs, studies (drawings etc.) for his renowned chapel in Vence, even personal effects such as Venetian furniture and Oriental wall hangings. 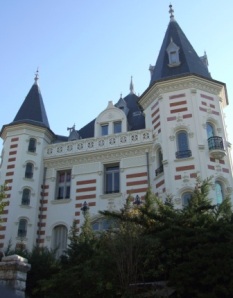 It was a long hike back to the center, but worth the trek to admire great pillared houses and rows of cypress trees along the route.

The Museum of Modern and Contemporary Art in the heart of the city is another gem with a collection of 400 works including sculptures and canvases by New Realists, Pop artists including Andy Warhol,  whimsical creations by one of my favorites, Niki de Sainte-Phalle, and more.  The avant-garde building with glassed-in ramps around an atrium is a sensation, as are the great views from its roof terrace.

We ran out of time and postponed a visit to Nice’s Chagall museum for another trip when we rode the Nice hop-on, hop-off tourist bus to the museum where I was in awe.  The 17 huge, colorful paintings depicting Biblical scenes are amazing.  Also to marvel are mosaics, stained glass windows and tapestries.

The bus stops at other tourist highlights, including the Russian church.  It’s a great way to take in the city, its neighborhoods and seaside panoramas, as well as travel to the sights. Head sets offer fascinating commentary in numerous languages.

When we get too old for life in the country, maybe we can move to Nice. 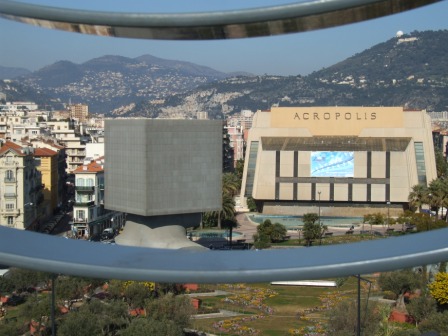 Nice’s flower market on the Cours Saleya takes place everyday from 6 a.m. until 5:30 p.m. except Monday when it is replaced with an antiques market.

Museum of Modern and Contemporary Art, Promenade des Arts, open daily from 10 a.m. until 6 p.m. except Mondays and some holidays.  Entrance is free. www.mamac-nice.org

Marc Chagall National Museum, avenue du docteur Ménard, open daily except Tuesday and some holidays from 10 a.m. to 6 p.m. from May to October. From November to April from 10 a.m. to 5 p.m. Admission: 7,50 euros.  http://www.musee-chagall.fr

Favorite restaurant: La Zucca Magica (the magic pumpkin), a vegetarian restaurant run by Italians.  The decor is pumpkins, gourds and squash — hanging from the ceiling, on the tables and window sills, depicted in paintings and photos on the walls.  It’s dimly lit with flickering candles, cozy and inviting.  There is no menu.  You take a seat, order some wine, and food starts arriving — five different dishes, one after another. www.lazuccamagica.com

More information on Nice at www.nicetourisme.com