Germany was my home for 28 years. Good times, wonderful memories – and fabulous friends.  Husband Bob and I recently returned to reconnect with many of those friends,  to visit old haunts, as well as other destinations that I will be writing about for the magazine German Life. (www.germanlife.com).

Maybe we’ve lived in the boondocks of rural France too long (since 2004).  Here life is tranquil, serene, quiet.  This time we found Germany a bit chaotic with monstrous traffic jams on the autobahns, construction sites  almost everywhere and  crowds of people in the city centers.  It’s hard to imagine that anyone could be unemployed in Deutschland with so much building in progress.

We spent several  nights with friends Klaus and Dagmar who live in Gerlingen just outside of Stuttgart. They urged us to take the U-bahn downtown to see the massive and controversial construction site for Stuttgart 21, the city’s  new railway and urban development project  which involves  57 kilometers of  new railways, including some 30 kilometers of  tunnels and 25 kilometers  of high-speed lines. Protesters still demonstrate at the site every Monday.  The project, which is estimated to  cost as much as six billion Euros, won’t be completed until 2020.

Another attraction adjacent to the site is the  new library, a modern and dazzling wonder in white by architect Eun Young Yi which has been likened to a Rubik’s cube puzzle.

Dagmar invited several of our friends for an excellent dinner, an antipasti of grilled vegetables, followed by  a  Swabian favorite,  stuffed breast of veal, all topped by  our very favorite German dessert, Rote Grϋtze, a yummy compote of red fruits.

Friend  Heti also entertained us with an amazing meal of Peruvian delicacies:  ceviche (fish  marinated in lime juice) and veggies, gallina picante parmesana (chicken with aji -hot yellow pepper), quinoa risotto with veggies, and for dessert, coconut flan and Tonka bean mousse.  All over the top.  More on those beans to follow.

Heti is an inspiration, and not just in the kitchen.  She recently lost 14 kilos on the Dukan diet combined with an hour of aqua jogging every day in the nearby Sindelfingen indoor pool.  When I lived  in the area, I frequently swam there year round.  There are also several outdoor pools for summer months.  Sadly, France is lacking in these first-class swimming facilities.

Klaus and Marianne, other friends from the Stuttgart area who frequently housesit for us in France, treated us to a delicious pasta lunch and a homemade Swabian apple pie at their new apartment.

We took a trip north to the Darmstadt area to see more friends.  For years I worked for the military newspaper Stars and Stripes which was previously headquartered just outside the city.  A group of former colleagues met us at an Italian restaurant for a fun evening.  Special pal Andrea, whom I consider a surrogate step-daughter, and her husband Thiemo, joined us at Darmstadt’s

famous brewery, Grohe, where we sat outside in the sunshine savoring the brew.  Another Darmstadt friend, Wilma, invited us for a delicious salmon dinner and stimulating conversation with her friend Erik.

Our travels also  took us to the Bergstrassee south of Darmstadt, Kaiserslautern, Augsburg, Munich and the Starnberg Lake district south of Munich.

For many years while I worked at Stars and Stripes, I lived in Jugenhiem at the northern end of the Bergstrasse in an apartment I called the “Treehouse.”  It was the top two floors of a former seniors’ home at the edge of a forest  and surrounded by tree tops.  We stopped for a visit, and it’s still the same – an idyllic hideaway in a jungle of green.

The best of the visit to the Bergstrasse, which extends 70 kilometers south from Darmstadt  to Heidelberg, and where many an ancient castle and castle ruins crown hilltops, was wine  The Bergstrasse wine region is divided into two parts, 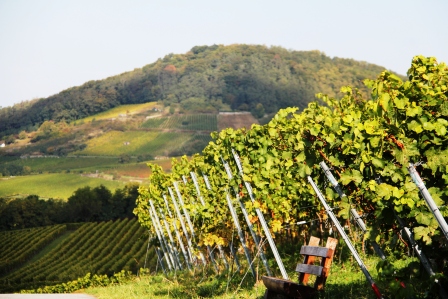 vines in the south in the state of Baden Württemberg, and those in the north in Hessen.  The former is Germany’s smallest wine region. German wines, as well as wines everywhere, have improved thanks to up-to-date knowledge and techniques, an expert told us.

For years German wines had a bad rep because “we exported the wrong wines, “ such as the  sweet Blue Nun, explained Maria Zimmermann of the regional tourist board.   Today German vintners are also well-educated, studying viniculture, not just learning the trade from their parents. We tasted some fine wines, and  Bob  made several purchases.

In the town of Weinheim, we toured a lovely garden followed by the best restaurant meal of the trip, an amuse bouche of scallops topping  a pumpkin salad sprinkled with mandarin oil, and a Hirsch (venison) medallion with an elderberry sauce and Steinpilze (boletus),  plus  parsley root puree. It was perfection. 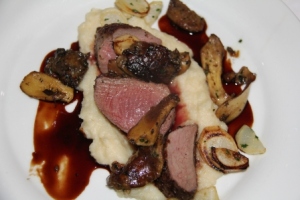 Heppenheim is the quintessential Bergstrasee town with a market place of well-preserved half-timbered houses.  We joined an after-dark tour up and down the ancient streets and stairways, following a costumed story teller and her lantern carrying assistant.  Periodically they stopped with the story teller relating charming tales and fables of the region, most translated from old German into an English that rhymed.  Very impressive and a delightful, unusual experience.

The greatest number of Americans outside of the U.S., some 50,000 who are military or civilians working for the military, makes their home in the Kaiserslautern area. There I interviewed Wolfgang Tönnesmann, director of the Atlantic Academy, who had a life-size cardboard replica of Obama in his office. Like me, he is no doubt thrilled with the recent election results.

My quest to try local food specials in Kaiserslautern led us to the town’s only half-timbered building and the restaurant Spinnrädl. We were in the Rhineland Pfalz area and the restaurant served up  Pfälzer dishes written in the local dialect on the menu:  Brotworscht, Saumaa, Lewwer (Bloodwurst, potatowurst so named because it is stuffed into a pig’s stomach or Saumaa) and liverwurst. Hearty fare accompanied by Grumbeerstampes   (mashed potatoes).

Jakob Fugger (1458 – 1525), a wealthy merchant (according to a guide, “he had more money than Bill Gates) put Augsburg on the map.  The Fugger family, in particular Jakob, was into finance and trade.  Jakob, known as the Empire’s banker, and  not unlike Bill Gates, had a social conscience.  He founded the Fuggerei, a section of the city for the town’s poor, the world’s oldest social housing which still exists with 140 apartments.  Rent is 1 euro per year.  We

followed a fascinating tour of the area, and also visited a dazzling Rococo banquet hall, the Schaetzler Palais (1767), as well as other local attractions.

The Munich visit focused on food with visits to the city’s legendary outdoor market, the Viktualienmarkt, its classy food emporiums, Dallmayr and Käfer, as 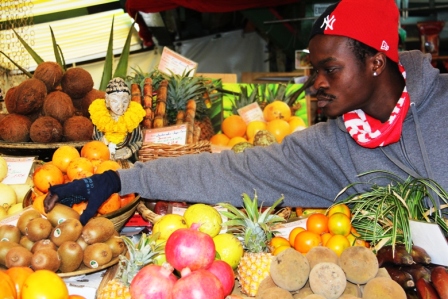 well as the food empire of Alfons Schuhbeck who has a collection of shops, including a Michelin starred restaurant, in the Platzl near the Hofbräuhaus.  Friend Heti clued me in on Schuhbeck who is huge on the German food scene.  It was at his incredible spice shop where she purchased the Tonka beans which come from South America for that exotic dessert.

Our visit wound up at the Starnberg Lake, one of several lovely lakes  south of Munich. All the sailboats which blanket the lakes in summer had been put to bed, but the region had plenty of charms for a fall visit.

A  must was a visit to the nearby Andechs Abbey above the Ammersee, another one of the regional lakes.  After admiring the Abbey’s church and its stunning Rococo stucco décor and frescoes,  we moved on to the terrace beer garden. 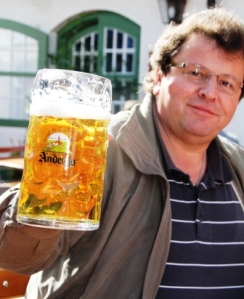 Monks have been brewing beer at Andechs since 1455.  These days seven different kinds of brew can be ordered, as well as Bavarian food favorites.

Other Starnberg highlights are the Baroque St. Mary’s Minister in the town of Diessen and  the lakeside Buchheim Museum noted for its collection of Expressionist works.  Last but not least, a wonderful bike ride following a cycle route along the Starnberg Lake with an outdoor lakeside lunch stop, as well as many breaks for postcard photos of the lake framed by distant Alpine peaks. (For more photos, see slide show to follow.  Comments are welcome. )