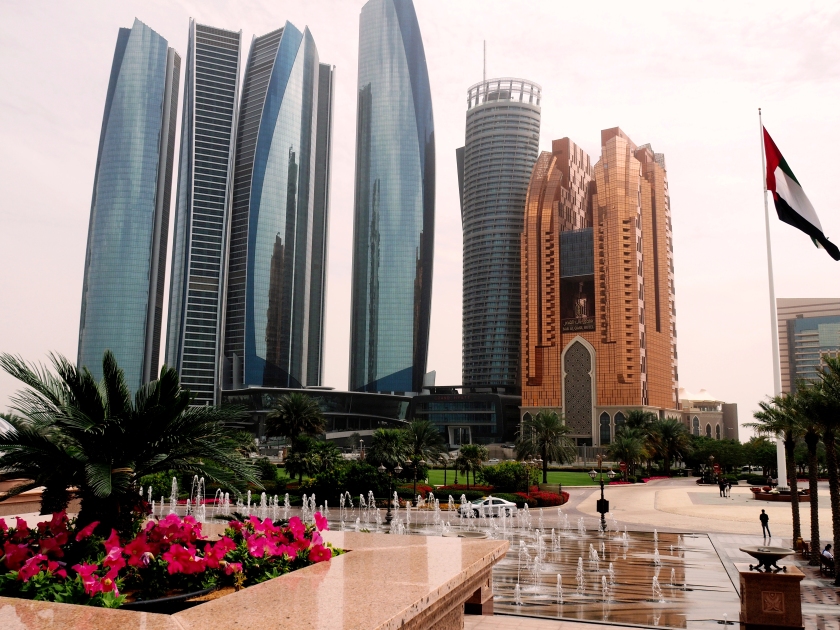 Abu Dhabi.  We had to change planes there en route to  Sri Lanka.  Let’s break up the long journey and check out the capital, the largest and wealthiest of the seven emirates that make up the United Arab Emirates.

It is indeed intriguing, interesting.  Bob and I had visited Dubai many years ago, long before most people had even heard of it. Like Dubai back then, and now, construction and progress are everywhere in Abu Dhabi.

“For a time, both emirates seemed locked in a battle to build the most glittering skyline,” notes an article in Global Traveler.  “But lately, Abu Dhabi has deliberately repositioned itself as New York to Dubai’s Los Angeles.  Abu Dhabi serves as the commercial and cultural heart of the U.A.E., while Dubai remains more populist, with an economy centered on tourism and real estate.” 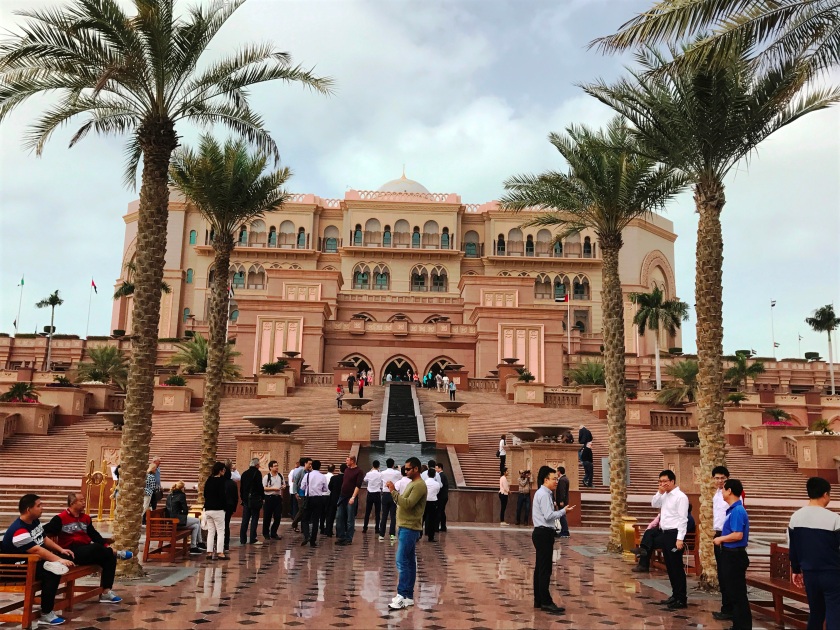 Nonetheless Abu Dhabi has its share of tourist attractions. The Emirates Palace, billed as a “7* luxury hotel,” is high on the  list. We wandered through the cavernous public areas of the $3 billion hotel, looking up and around at an abundance of  gold leaf and marble.  We had an expensive coffee amidst the posh surroundings. I asked where the gold bar vending machine 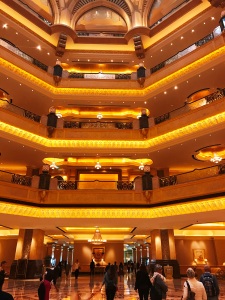 was (mentioned in an NYT article), only to be told it had been removed.  Pity – that was my souvenir choice!

Fortunately taxis are reasonable in Abu Dhabi. There was nothing of interest within walking distance of our hotel, supposedly in a central location, and distances are vast.   Taxi driver Mohammed, an Indian from Kerala, took us to the sights.

He is one of 65 percent of Abu Dhabi residents who are foreigners, he told us. Fifty percent of the foreigners are Indians, and most, like Mohammed, are from Kerala in the southern part of the country.

Markets are my passion.  I asked him to show us the fish market. This was not the collection of stalls with fishermen selling their catches as I had envisioned, but  a huge warehouse with aisle after aisle of all sizes, shapes and varieties of sea creatures.  Mohammed knew many of the workers, all from Kerala.  We continued to the date market – another vast structure with nothing but dates – numerous different kinds. There too he had chums from Kerala.  One gave us a sample of chocolate covered dates – exquisite. 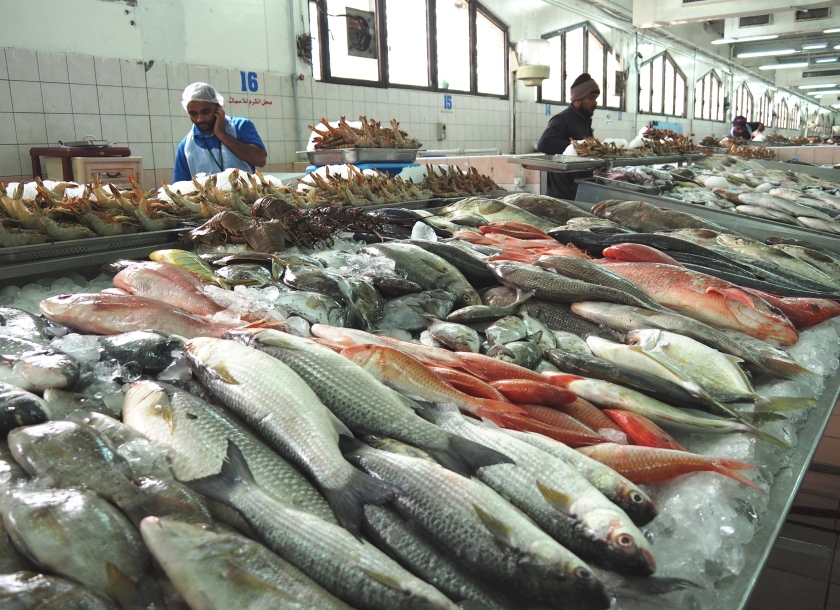 We continued to Heritage Village, an old fortress where the Abu Dhabi of bygone days with Bedouin tents and old stone houses has been recreated.  Artisans are at work in many enclosures.  I zeroed in on a purse in the leather workshop and tried to bargain with the shopkeeper, attired in the long traditional Muslim robe. I assumed he was a native.  No, he too was from India.

Foreign workers come to Abu Dhabi where earnings are good, work for several years, save and then return home, a Nigerian taxi driver explained.  He has a degree, but no jobs in Nigeria.

Abu Dhabi’s piece de resistance is the Sheikh Zayed Grand Mosque, a dazzling edifice of domes, minarets, reflecting pools, crystal, marble…. materials from all corners of the globe. Elements of Moroccan, Persian and Arab styles blend in this monumental beauty.  Non-Muslim visitors are welcome. Like all female visitors, I was given a blue abaya to wear. 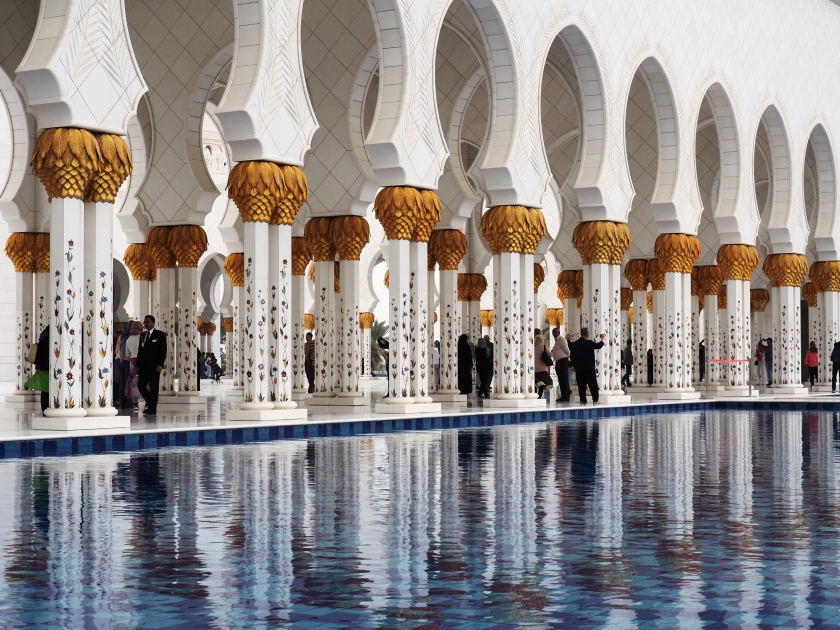 We wandered around with numerous other visitors all taking photos while Mohammed took time out to pray. 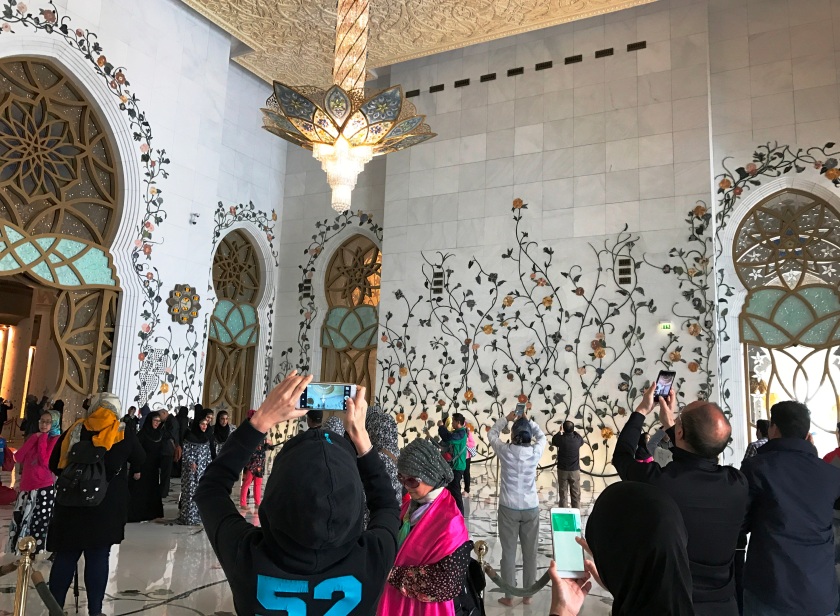 Other Abu Dhabi attractions include the Galleira, a luxury shopping mall, and Yas Waterworld, an amusement park with watery rides. We passed on both, but did ask to see the Yas Marina Circuit that hosts the Abu Dhabi Formula I Grand Prix. I had read that when races were not taking place you could experience the circuit at high speed as a race car passenger.  Yes, but arrangements must be made far in advance. I failed. 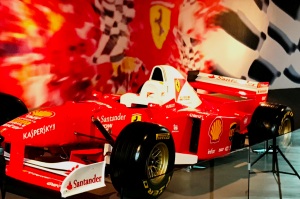 Instead Mohammed took us to nearby Ferrari World. We were content to amble around the mall and admire cars, although had we paid the expensive entrance fee we could have experienced high speed simulation drives.

Future Abu Dhabi visitors will enjoy major attractions on Saadiyat Island,  a $27 billion project that will include the first outpost of the Louvre outside of France, scheduled to open at the end of this year, a Frank Gehry designed Guggenheim museum, and much more.

The fall in the price of oil has delayed completion of these showpieces. Abu Dhabi has about a tenth of the world’s oil reserves which accounts for its wealth.   But, the reserves will decline and the emirate is preparing for life without oil.   Masdar City, a $22 billion project currently under construction, aims to create the world’s first carbon-neutral city powered almost entirely by solar and other renewable energy sources. 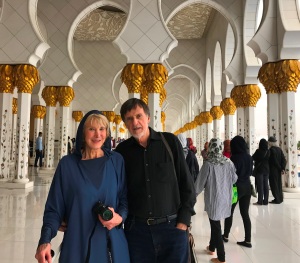 Abu Dhabi is worth a short visit, especially if you want to break up a long flight to Asia.  We found the people, namely foreign workers, all very friendly and helpful. Most speak English.  Because it is a Muslim country, alcoholic beverages are only served in international hotels.  All manner of ethnic restaurants abound.  We tried Thai, Italian, French , a British pub, but the favorite was Café Arabia with Lebanese, Syrian, Moroccan specialties and more.  I relished Palestinian Shakshuka, a spicy tomato, egg and feta combo.  See Today’s Taste, column upper right, for a recipe.

Please feel free to comment – just scroll down and add your thoughts.   Don’t miss future posts. If not already a Tales and Travel follower, sign up (upper right). Your address is kept private and never shared.