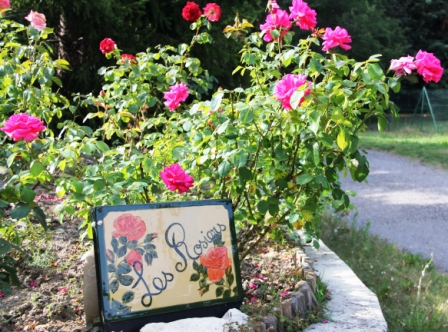 It’s officially over. It makes me sad, even though summer 2014 was not a normal Provence summer. Thanks to climate change, we had thunderstorms and cool, cloudy days. Too much wind and rain. The latter had a plus. July and August days are usually hot and sunny with almost no rain. This year we saved both money and time on watering all our flowers and trees. Still, I would have preferred a real summer.

Gone are those long summer nights when we could dine on the balcony by daylight up until 10 p.m. Soon many restaurants will close or drastically shorten 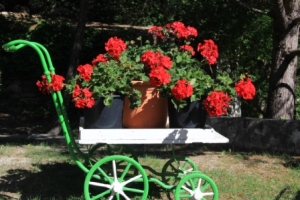 their opening times. I am still swimming, but that too will come to an end before long. Tomatoes — those tasty gems I buy from farmers at the markets, will soon disappear and we will left with those tasteless Dutch hothouse tomatoes at supermarkets. Fall and winter are for cosying up with the cats by the fireplace — not as exciting as summer, but not so bad.

In spite of the less-than-perfect weather, we enjoyed some fun times and outings during summer 2014. The following photos are souvenirs of those good times.

Again I tried for the perfect lavender shot. Now that I have had photo lessons from friend and fab photographer George, there’s hope for improvement next year. 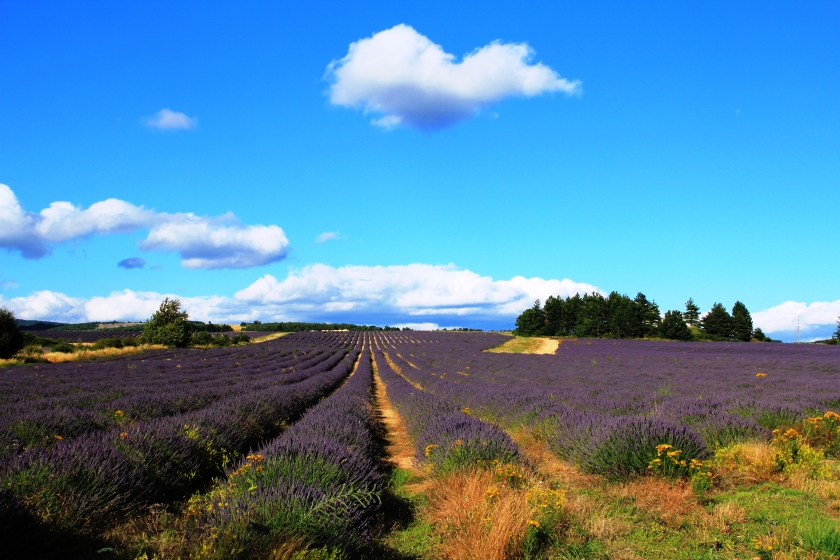 We joined fellow Americans for a Fourth of July party sponsored by Democrats Abroad in Avignon. 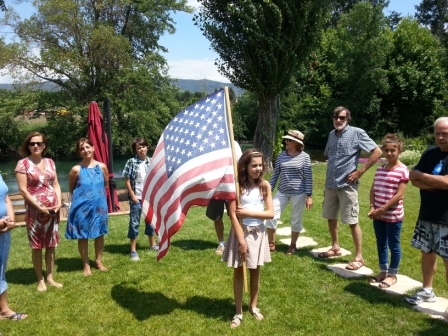 Then we joined the French for a Bastille Day fete in neighboring Vacheres. The July 14th sardinade (grilled sardines) is an annual event with plenty of wine, music and song – in addition to those petite fish. 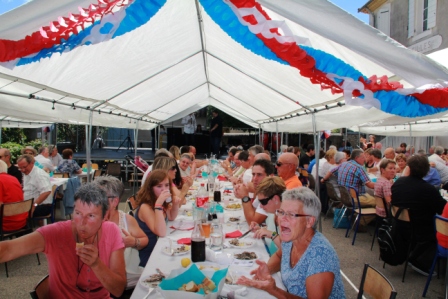 On the cultural side, we joined a group from our town for a bus excursion to an outdoor piano concert in La Roque d’Antheron, also an annual event — preceded by a picnic in the park.

And, we went to Avignon for a day at the Festival d’Avignon which features almost 1,000 theatrical performances. The festivities in the streets are more than jolly. 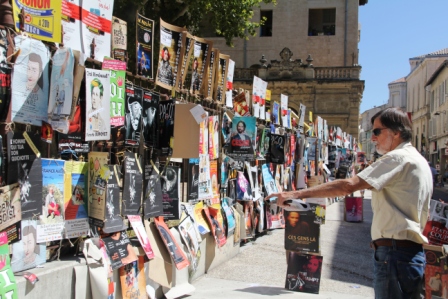 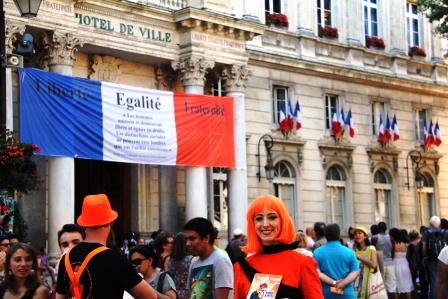 And north to Sisteron for an outdoor concert under the Citadele.

I longed for the mountains, so we drove to a winter ski town that draws hikers and mountain bikers in summer. We rode a chair lift to the heights for an easy trek. Alas, riding a chair lift in summer minus snow and skis is not easy. Getting off I did not  jump aside fast enough and was whacked in the back with the chair and knocked to the ground. Painful. We canceled the hike, but enjoyed beautiful scenery on the way home. 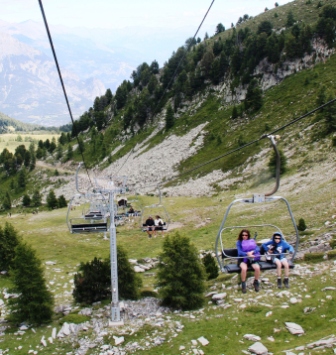 Another community meal – paella in our town, Reillanne. We love these events, good food and socializing.

Again this summer we tried our luck at a Vide Grenier (Empty Attic). It’s a flea market, but our hopes of making money on our no-longer-used possessions were dashed. We could not even give things away. There were still treasures in the box labeled “Gratuit” (Free) after the last customers had gone home.

Cannes on the Riviera was our destination for an event sponsored by the American Club of the Riviera – mind-boggling fireworks shot from boats in the harbor. We spent the night in Cannes and enjoyed a visit to the off shore island, Sainte Marquerite, the following day. Gorgeous.  On the way home, a quick dip in the Med at Theoule-sur-Mer 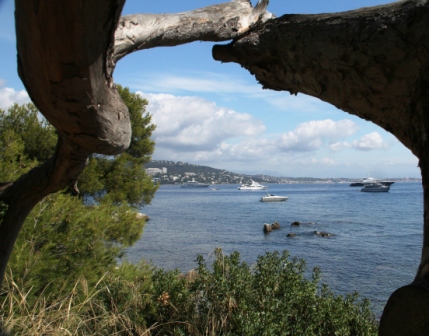 Friends Mollie and David put summer to bed with a fabulous garden party.

Summertime is also for enjoying our pool and yard and flowers — and the SPPS (State Park Picnic Shelter). See previous post “Pergola — Or State Park Picnic Shelter?”  Aug. 22, 2013.  It’s looking better,  thanks to the decorative elements painstakingly installed by Bob, and Ben’s suggestion that we we lighten the posts and beams.  That made a huge difference.  Thank you, Ben.  You saved it– and our marriage. 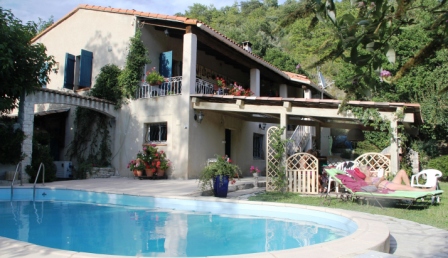 Don’t miss the next post featuring our summer renters. We meet fun and interesting people who rent the guest apartment at Les Rosiers for vacation. And then… a post on Incredible Iceland.  If you are not a Tales and Travel follower, sign up now at top right so you don’t miss future tales.

Summer may be over, but grilling is not. One of my favorites which is always a hit with guests is grilled lamb. See column at top right for recipe.

I recently had the good fortune to accompany other American journalists on a press trip to the Midi-Pyrénées region (southwestern France). Art and gastronomy were the focus of the voyage, and the gastronomy was extraordinaire with four and five course meals for both lunch and dinner on most days.

We savored cuisine at restaurants whose chefs are famous, restaurants with Michelin stars, as well as a few restaurants that were ordinary at best. We visited colorful markets and tasted the area’s wine. Following are highlights of our culinary experiences.
The week-long journey got off to a smashing start with dinner at Michel Sarran in Toulouse, France’s fourth largest city and the capital of the Midi-Pyrénées. The ambience in this two-Michelin star establishment named after its renowned chef is classy, elegant, modern. The food definitely wins stars for appearance and presentation. Each course (we had four) was a painstaking work of art with numerous bites of exotic creations, such as sea urchin mousse and hay ice cream.

For dessert, a wild strawberry melange with a lemon basil sauce, lime crumble and the hay ice cream (lait glacé au foin).
All very, very good. But we wondered if all that labor intensive preparation of so many different tiny bites wasn’t a bit much. Was the chef trying too hard to win a third Michelin star? I would have preferred fewer items served in slightly larger portions. http://www.michel-sarran.com

Lunch the following day at the outdoor terrace of Emile, a Toulouse favorite in the bustling Place Saint George, was a winner. Chef Christophe Fazan is known for both creative cuisine and local favorites.

Foie Gras, the controversial fattened liver from force-fed geese and ducks, is a regional specialty. Several of my traveling companions ordered this served with mango chutney as their first course, while I chose ravioles de foie gras, crème aux cèpes. This was my all time favorite dish of the entire trip – ravioli filled with foie gras smothered in a cepe( bolet/porcini) sauce. Each bite was bursting with flavor. Elaine, our affable tour leader, went for Cassoulet, the signature Toulouse dish, a stew of meats, sausages and beans. Former French president Jacques Chirac is said to have especially enjoyed Emile’s Cassoulet. http://www.restaurant-emile.com

While Michel Sarran’s food was good, most of us preferred that of Christian Constant, another renowned French chef. His restaurant, Le Bibent, features glamorous baroque/art nouveau décor and great food.

My first course, a tartare of several kinds of fish and oysters with a hint of ginger served in oyster shells, was excellent, and better than my main course, a confit of lamb. Confit or preserved meat is yet another regional favorite with duck confit the most popular.
An incredible dessert followed: a gigantic mille feuille. This pasty whose name 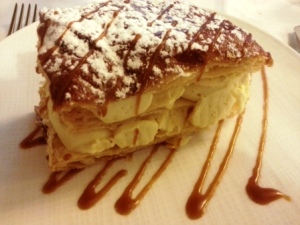 translates as “a thousand leaves” is layers of thin, flaky pastry with custard in between. Constant’s version is enormous, yet light and yummy.
I was tempted to buy Constant’s cookbook in English. But, my shelves are already overloaded with cookbooks and my suitcase was already too heavy. http://www.maisonconstant.com/bibent/
We were ready for a simple and light lunch the following day. Le Capucin, supposedly a gourmet fast-food eatery established by yet another famous chef, Michel Bras who has several restaurants which together have earned three

Michelin stars, was the place. Sandwich type ingredients, albeit with some creative concoctions, fill edible cones which you eat like ice cream cones while sitting on high stools. A clever idea, but short on taste. A basic ham and cheese on rye would have been better. http://www.capucinbras.fr
We sampled more of Michel Bras’ cuisine and met the star chef at Café Bras, his newest restaurant in the new and stunning Soulages Museum, dedicated to the works of contemporary artist Pierrre Soulages, in the town of Rodez. Mixed reviews on the food here, although all were in awe of the first

course, a light and creamy type of cheese soufflé. We requested – and were given – the recipe. The main courses were standard fare — a choice of veal, fish or beef — none of which excited the palate. But, ah…the dessert. As a chocolate lover, this got my vote as best dessert of the trip: le petit pot de crème praliné/chocolat croquant sésame. (a decadent chocolate praline cream). http://www.cafebras.fr
Most of us were not overly impressed with yet another star diner just outside of Rodez at Chez Isabelle (one Michelin star), but by this time perhaps we had

reached the saturation point with gourmet cuisine. I ordered Pressé de joues de boeuf et de foie gras au vin rouge, gratin de macaronis. (cheeks of beef with foie gras, red wine sauce and macaroni). Disappointing, and even without a star I can do a better job on macaroni. Chef Isabelle Auguy is one of the growing number of female chefs who have earned the coveted Michelin star. http://www.restaurantisabellesuguy.fr
There were a few other disappointments. The main course at a hotel meal sounded and looked exquisite: scallops (one of my favorites) atop a mound of risotto. Alas, the scallops were overcooked and the risotto was mushy. I am not

shy about trying unknown foods – all part of the taste experience. For lunch in the town of Conques, I bravely ordered the first course:  gateau aux oreilles et pieds de cochon, vinaigrette à la moutarde (cake of pig ears and feet). The French let no part of an animal go to waste, but in this case, they should have. The cake was tasteless.
Not so the boudin noir (blood sausage) served with apples, onions and potatoes and rich in flavor at Le Clos Sainte Cécile, a lovely restaurant in the town of Albi where we sat in the garden under plane trees.
Dinner at the Hervé Busset restaurant won hands down as the favorite meal of this epicurean voyage. This was the trip finale with both an overnight and dinner at the one star chef’s hotel and eatery in a renovated ancient mill in a wooded setting on the banks of the Dourdou River just outside of our favorite town, Conques.

Busset has a passion for nature reflected in his cuisine. Wild edible plants are used in the preparation of his food which is innovative, unusual, delicious. http://www.moulindecambelong.com
After a week of extravagant eating, I was ready for a Big Mac, but the zipper on my jeans told me it was time for starvation.

Comments welcome and appreciated. Today’s Taste features a recipe for Chilled Avocado Soup topped with Crab.  My guests loved it!.  See “Today’s Taste” at the top of this post. While  you are up there, sign up to become a Tales and Travel follower.