The view was breathtaking. Wisps of clouds drifted in a gigantic canyon sliced through walls of jagged rock. We had paid extra for this room with a view at Oman’s Al Jabal Al Akhdar resort. It was worth the expense. During our three-day stay at this mountain retreat, I was seduced by the dramatic, ever-changing view. I took far too many photos 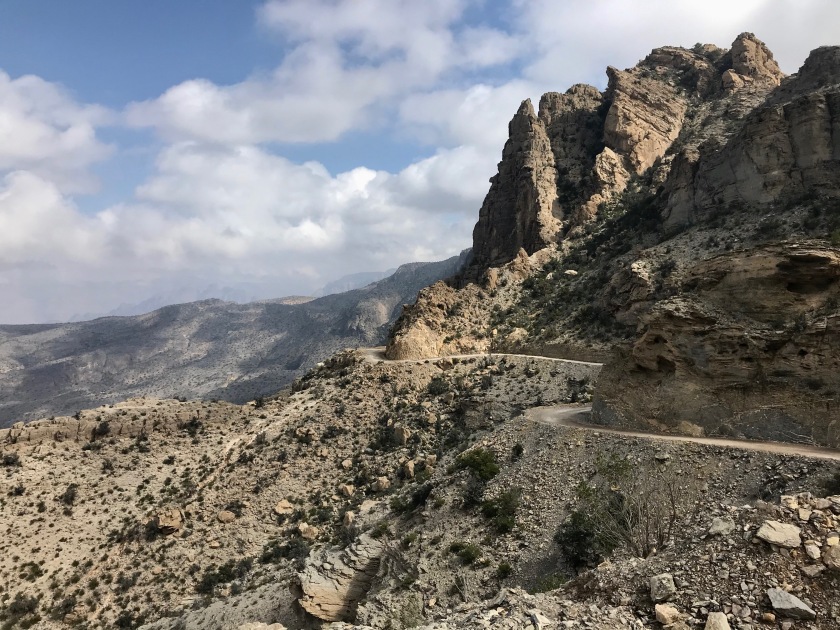 Oman’s mountains are not like mountains I have known. These craggy, rugged walls of rock in all shades of brown are intimidating. No wonder they are popular with extreme adventure seekers.

Our resort offers “the ultimate Jabal Activity Wall: Use your hands and a series of strategically placed metal steps to trace your way along the vertical rock face before navigating jagged rock formations, ladders and vertical stairs. Below a vast canyon plunges to 1,000 meters at its deepest point, providing you with a front row seat as you soak in the peaceful silence.” At the end of the climb, you zip line, “fly through the air for the ultimate adrenaline rush.”

Maybe, only maybe, back in my much younger, wild and crazy days, I would have attempted this challenge. During our January visit, I was happy to soak in the peaceful silence from our room’s balcony. Just pondering that canyon gave me an adrenaline rush.

The Al Jabal Al Akhdar perched at above 2,000 meters in the Al Hajar mountain range is supposedly the second highest elevation resort in Arabia. In addition to the above

adventure, all types of mountain hikes are available in the area. Most were beyond us. However, we did set out on a hike rated “easy,” only to turn back after about an hour. The trails, like the surroundings, are rocky. There are sections of steps, uneven, sometimes broken. We stopped at a clearing for photos. Two women with a guide were there. One of the women, far younger and no doubt fitter than I, fell. This made me nervous, nonetheless we continued on a bit until we came to a fairly steep descent which led to a dry creek bed – more rocks of all sizes. The trail on the other side climbed to an ancient village. We decided the view of the village from afar was enough. 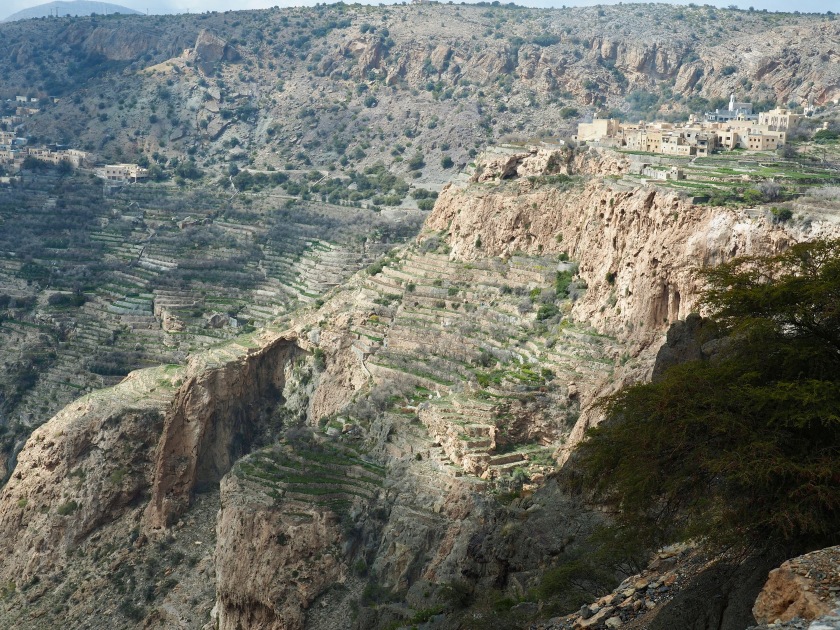 The hike did offer more outstanding views of distant mountainside villages and terraced slopes. Jabal Akhdar is known as “Green Mountain.” Native trees and herbs once thrived in lofty orchards there thanks to the falaj irrigation system, rivulets coming from a stone cistern at the top of the mountain. Climate change has meant much less rain during the past ten years. Many of the terraces are barren of crops. Instead of pears walnuts, apricots, peaches, plums, figs, and apples, farmers are now planting olive trees which require much less water. A pipeline carrying desalinated seawater up the mountains is beginning to allow farmers to cultivate the terraces with other crops once again.

I planned our trip so that we could be in the mountains on a Friday and attend the weekly goat market in Nizwa, Oman’s old capital. It was wonderful, although there seemed to be as many tourists with cameras as farmers selling goats.

The vendors touted the merits of their beasts. Prospective buyers checked out the animals and did some serious price negotiating. Everyone took photos. The goats, many gorgeous varieties and mothers with babies, were irresistible.

Guide/driver Lotfi led us to Nizwa’s souk where we learned all about dates. Some 250 varieties of date palm are cultivated in Oman, and at least 12 different kinds of dates. We tasted several.

Handmade Omani daggers are the de rigueur Oman souvenir, but not for us. At a shop in the souk, I found some interesting old silver jewelry – not from Oman, but Afghanistan. – my souvenir.

From the mid 8th to the mid 12th century, Nizwa served intermittently as the country’s capital for a succession of Imams. The Nizwa fort, a citadel of monumental proportions, provided a safe haven in dangerous times. Dark and narrow passageways lead to the citadel. During a visit, we learned about the ingenuous traps to catch invaders off guard. Planks were placed on stairs over deep, gaping pits, many filled with hot oil. When the intruder alarm was sounded, the planks were removed.

Salim was our trusty driver for our thrilling off-road adventure from the mountains to the coast. He negotiated narrow, rutted, dirt roads on the edges of vast precipices in the midst of jaw-dropping scenery. I kept wanting him to stop so I could take more photos. It was too risky. Occasionally an oncoming vehicle approached. This was another adrenaline rush. It looked impossible, but Salim skillfully maneuvered the Toyota 4WD and kept us from plunging off the edge.

During the long drive, we talked – about his life, family, job and more. He taught me lots about the way of life in Oman and Islam. (see previous post, “Introducing Awesome Oman” ) The religion has been given a bad rap in many parts of the world.  I gained respect and a better understanding of Islam thanks to Salim.

Our Oman trip began and ended at the beach.  I’ll write about that soon, as well as the capital city, Muscat.  Stay tuned.  If not a Tales and Travel follower, please sign up, upper right.  Your address is kept private and never shared. 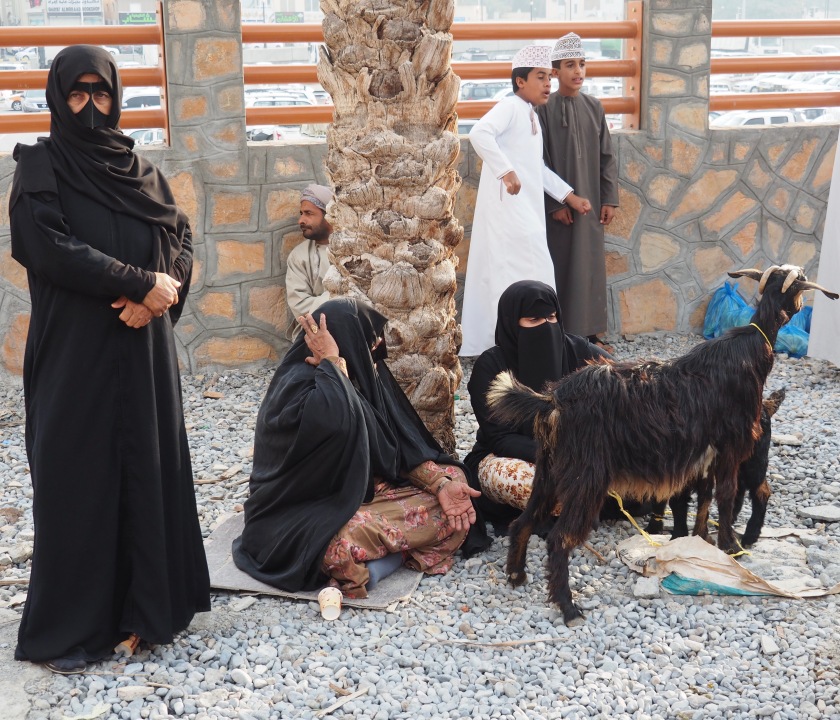 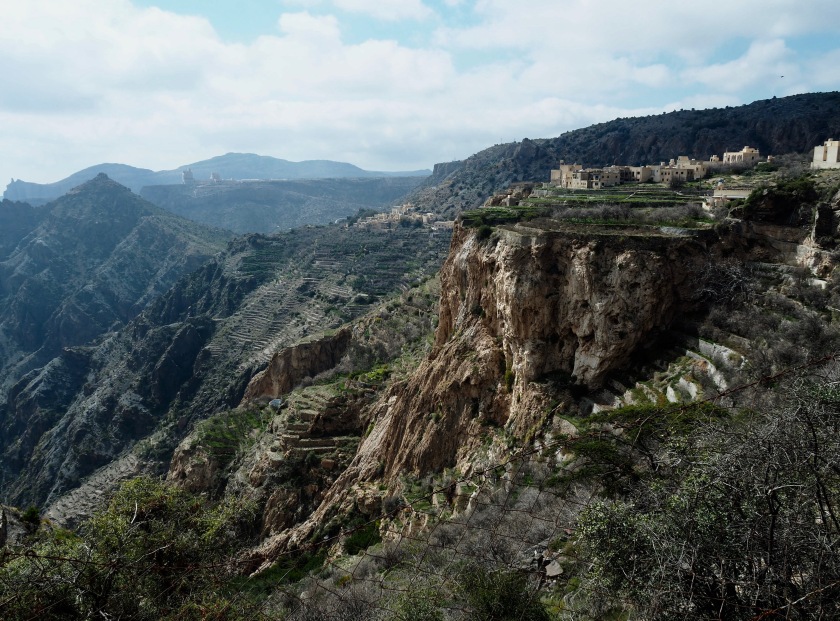 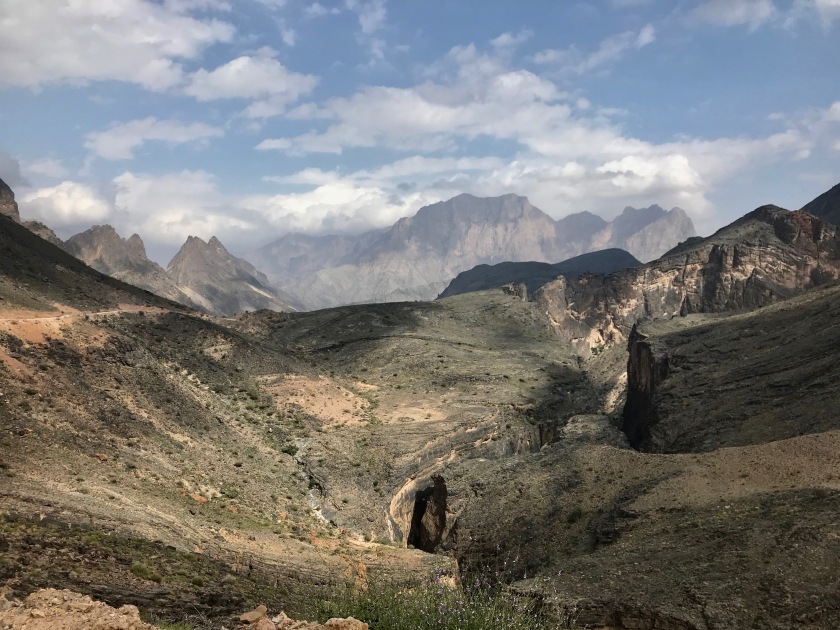 Comments are welcome and appreciated.  I love feedback.  Click below then scroll way down and add your thoughts.