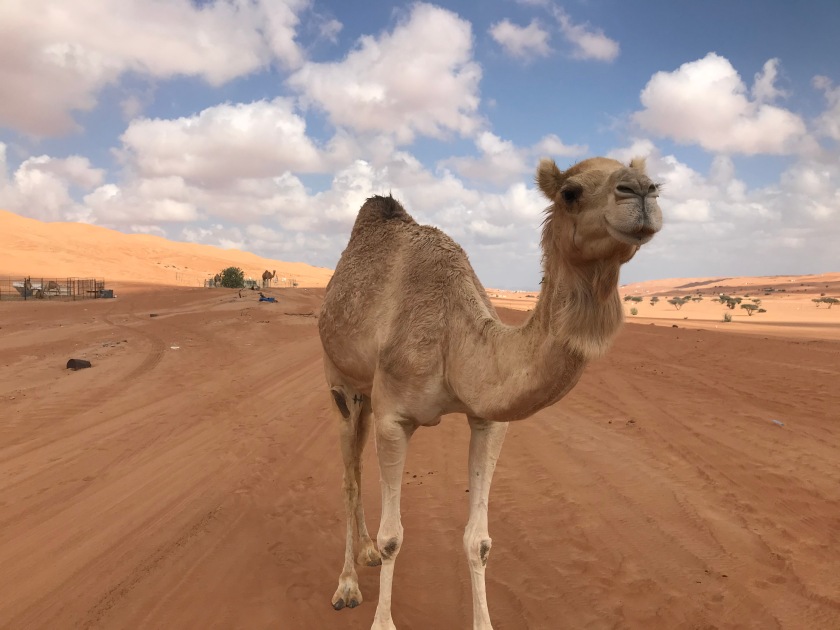 Bob and I were lucky. In January, just before the onslaught of the wicked virus in Europe, we ventured to Oman (see a previous post “Introducing Awesome Oman”). Our excursions to the desert and mountains were exceptional. It’s time to stop dwelling on disease and relive those adventures.

Sand. Sand. More sand. Slopes and dunes and wide, flat expanses. After stopping in a tiny town to let air out of the tires, driver Mustafa navigated mile after mile through this landscape. At first he followed tracks. The tracks ended. He charged on. I was incredulous. He had no GPS. How did he know where to go? There was little difference between one dune and another.

He knew. In the midst of this vast emptiness we spotted two other vehicles. We had arrived at our “camp,” a short but strenuous hike to the other side of a dune. Climbing a dune is more challenging than climbing through deep snow in ski boots.

The camp was something out of a glitzy travel magazine – luxury deep in the Wahiba Sands desert.

Next to the bedroom tent was our private bathroom tent. This was five-star glamping.

We were the only guests in the camp with a cook, the camp manager and his assistant to look after us. Shortly after arrival we were invited to the “sunset lounge.” Another short hike up a dune, and voila, a comfy couch for   watching the spectacular show of colors in the sky as the sun descended into distant sands. It was surreal.

Dinner was served in the dining /living room area, not really a tent, but a canvas roof sheltering more couches, artisanal objects– ceramics, glass vases filled with sand – pillows, carpet. I doubt many Bedouin chieftains had living quarters like these.

We dined on a melange of seven different “meze” (Middle Eastern appetizers), including an outstanding eggplant concoction. I asked Egyptian chef Mahmoud for the recipe.

No camp is complete without a campfire. Without the sun, it was cool.  The desert fire’s warmth felt good. And, somehow it felt strange to be in this isolated ambience with all these remarkable amenities.

When the fire was put to bed, the desert night was eerie, mystical.  Total blackness, except for the sky crowded with vibrant stars. Silence. The generator was off. We were alone. The staff  left to spend the night in a town.   They gave us a flashlight.

Desert outings are a popular Oman tourist attraction. Many camps accommodate numerous guests. We had the deluxe version. Camp manager, Wael, an Egyptian, told us our camp was assembled just for us, and would be disassembled after our departure.

“It’s a huge logistic work. Dismantle every item, then do it all over.” It would be set up in a different remote location for the next guests, he said.  It is all very impressive, and it had been expensive, nonetheless we felt guilty. 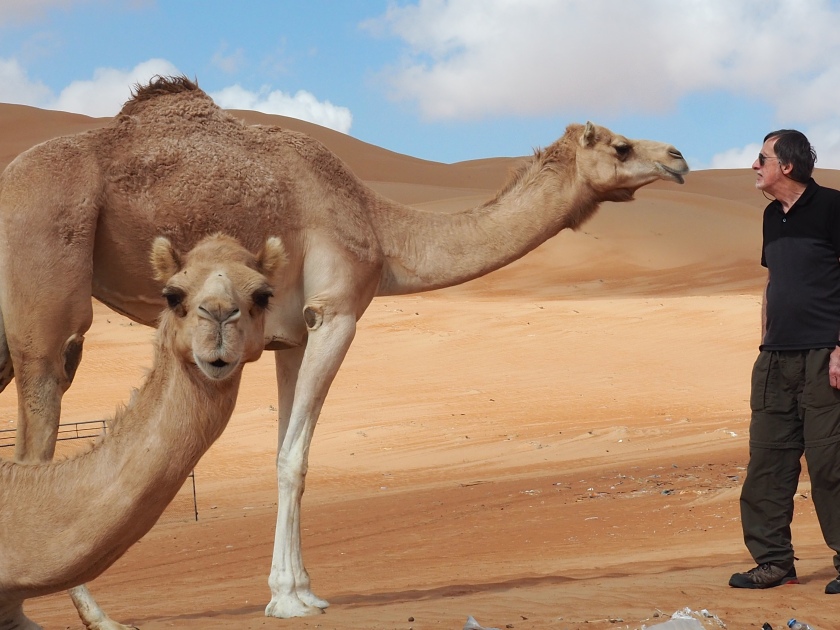 En route to the camp, we had passed camels, some in pens, some freely roaming. Wael explained. “They are trained for races here,” he said. “The number of camels one owns is still a sign of wealth in Oman.”

There are camel races in Oman, but Omanis prefer to sell their camels to owners in Qatar and the Emirates where the stakes in camel races are higher, he said. In those countries, Omanis can sell champion camels for as much as $100,000.

Wael went on to explain that real human jockeys no longer ride the camels. “It’s too dangerous.” Remote controlled robots are the jockeys of today.

Our over-the-top escapade was desert for tourists. But, at our age we are beyond roughing it in a genuine Bedouin camp.  I am not sure such camps exist. Only five percent of Oman’s Bedouins live a nomadic life. They rarely ride camels, but drive cars.  They live in houses, not tents. However, they preserve their culture and they lead lives closely connected to their history and nature. Many work in the tourist industry.  We met a Bedouin family selling handmade souvenirs from their home on our way out of the desert.

The desert experience, including  being pampered, was  definitely amazing.  From the desert we proceeded to the mountains for more adventure. Don’t miss the next post.

If not a Tales and Travel follower, please sign up. Your address is kept private and never shared. Trust me.

I had intended to include Mahmoud’s eggplant as the featured recipe in Today’s Taste. I followed his recipe, but my version was a disaster. It tasted nothing like his. Instead, I will include a tasty Indian dish I tried recently, Egg Curry — great way to use those colored Easter eggs.  Indian cuisine is popular in Oman. This is a vegetarian recipe dedicated to my blog guru David, a vegetarian. See Today’s Taste.

25 thoughts on “Oman: Luxury in the Desert”