I am passionate about food and cooking. Cookbooks – I must have 100s.   I love trying new recipes, experimenting with exotic ingredients.  Over the years I have been to many a cooking course, often during travels to learn about ethnic cuisines.

We moved to southern France several years ago, yet I had never attended a cooking course in France.  Shame!  The mother of all cooking schools, Le Cordon Bleu, is French with headquarters in Paris.  It is legendary. My idol, Julia Child, got her start at Cordon Bleu Paris.

On a recent trip to Paris to see our American dentist, I set a day aside for Cordon Bleu.  I was overwhelmed.   This is indeed the Harvard of cooking schools, like no other.

This article, a post for my foodie fans, appeared on the web site: travelsquire.com

“The Art of Cooking like a Chef,” was the title of my all-day course, three hours of demonstration in the morning, followed by an afternoon cooking workshop. 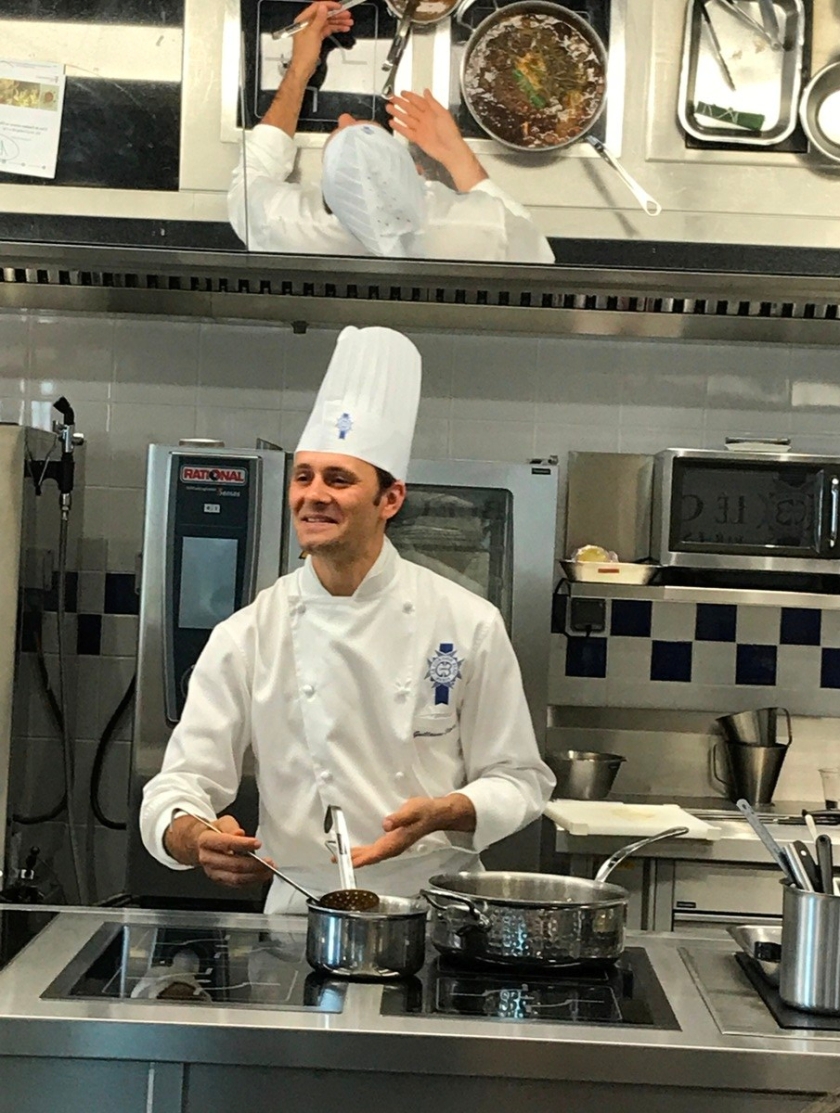 Twenty-five of us from 11 different countries watched and listened as our teacher, Chef Guillaume Siegler, prepared three different and demanding dishes in the professional kitchen classroom.  He spoke French, but a translator stood by to explain all in English.

First step:  Peel the tomatoes.  “The skin is disagreeable to the mouth,”  said Siegler. He is right, but at home I usually skip this step — never again if I want to cook like a chef.

The tangy red pesto was a mixture of raspberries, tomato pulp, pomegranate juice, olive oil, pomegranate molasses and green Tabasco, all mixed in a food processor.

As he moved from tomatoes to pomegranates, Siegler, who has worked in many famous Parisian restaurants as well as his own restaurant in Tokyo,  spewed out more words of culinary wisdom: “To cook well, you must think about what you are serving.”

“Respect all products and work only with excellent products.” He put this into practice when he was about to put the finishing touches on the tomato-pomegranate-burrata concoction.  He rejected the basil on hand —  too wilted. — and sent an assistant to the school roof garden to pluck some fresh basil.

The finished dish was food-photo perfect – almost too beautiful to eat.  It went into the frig and he moved on to the main course:  Roasted rack of lamb with parsley crust, pearled jus with rosemary, and summer vegetable tian.

Lamb is one of my favorites, and I have always been in awe of a rack of lamb with the bones parading perfectly to crown the roast.  Even though I adore cooking, this is not something I would ever attempt. 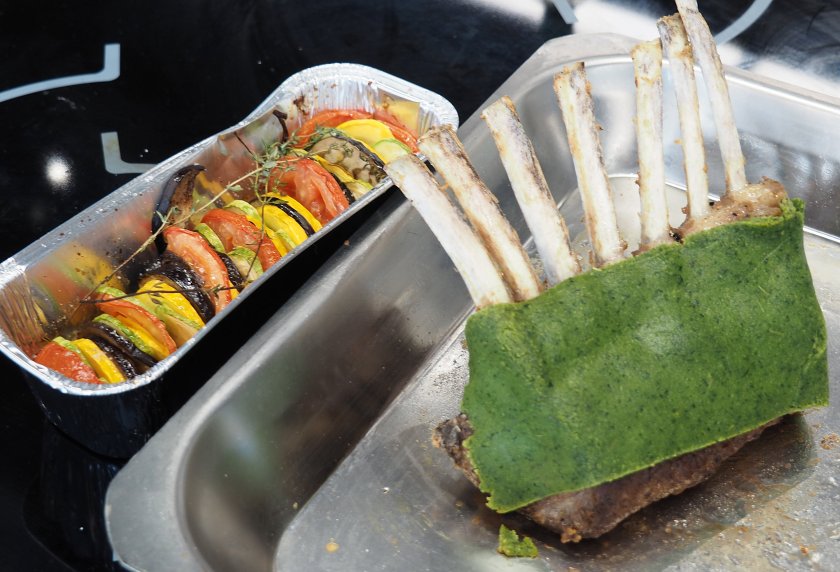 As I observed, deboning that hunk of meat is no day at the beach.  With skill, precision and speed, he cut away, explaining the intricacies of the task.”Remove some of the skin, but not too much… Get rid of the nerve which is attached to the bone…. Make careful incisions to free the meat from the bones.”

The summer vegetable tian came next.  Rows of sliced vegetables (eggplants, tomato and zucchini) were attractively layered on top of a bed of sautéed onions. I have sautéed onions zillions of times, and have never given much thought to it.  That will change.  There is professional approach to even this simple task.

He used a mandolin to get perfect, even slices of the veggies.  He showed how to use this dangerous tool and save your fingers.  Start out holding the chunk of vegetable down with your knuckles, as it get smaller, switch to the palm of your hand.   Having recently sliced off about a ¼ of a finger tip as I tried to slice potatoes with a mandolin,  I will surely heed this. 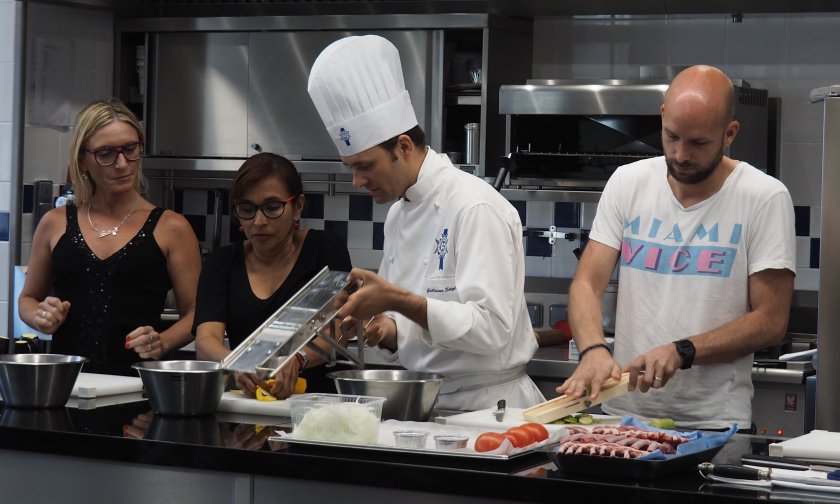 By now I was starving, and all those heavenly aromas had not helped.  Alas, we were all given small portions of his creations to sample.  “Where’s the wine?” someone asked.  No wine, but each dish was delectable.

The afternoon workshop was held in the state-of-the art, stainless-steel and white teaching kitchen where each student had his own work station. After we donned our Cordon Bleu aprons and chef’s hats, we were each presented with a lamb rib roast.

Oh No!  The GPS on my phone sent me in the wrong direction when leaving the metro.  I  missed the first 15 minutes of  the morning intro class.  I knew we would be cooking during the workshop, but had not realized we would each get our own chunk of lamb.  So, I had not paid that close attention to the somewhat complicated instructions.  Instead I focused on photography, figuring this was one part of Cooking Like a Chef I could skip.  If I wanted a rack of lamb, I would order the meat prepared from a butcher.

I felt dumb and humiliated, and sought assistance. Alisa, a bubbly young Russian woman whose work station was next to mine, guided me through the initial attack of the lamb.  She in turn sought help from a Russian doctor next to her.  They had met the day before at another Cordon Bleu course.  The doctor was exceptional, applying her knowledge of human anatomy to the lamb, making precise incisions.

I could not expect Alisa to do all my work, nor Chef Siegler who raced from work station to work station, guiding, critiquing, encouraging.  I was too embarrassed to reveal my total ignorance of his instructions.

“Five more minutes to finish the lamb,” he announced.  We had to move on to the jus, crust and veggies. Tension was mounting. 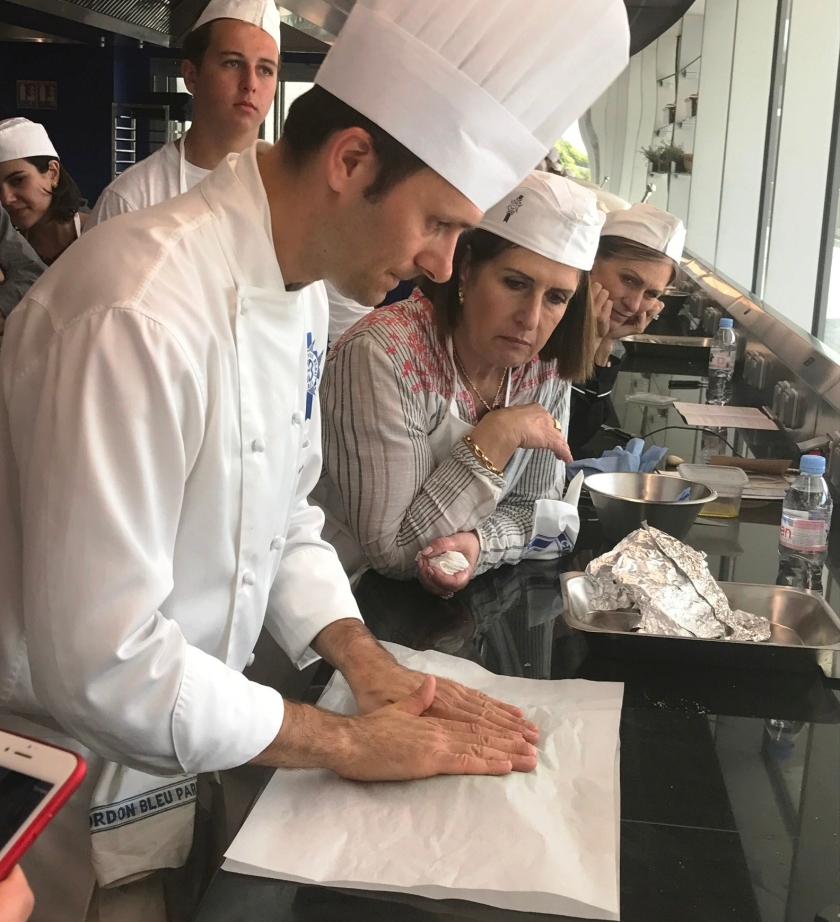 “I love to cook.  I love to share, with customers and students.  But I prefer students,” Siegler  told me.  “I need to have my eyes on everything here.  Some people have never held a knife.”

My classmates, however,  appeared to have advanced far beyond wielding a knife. The dedicated chef  came around to inspect each student’s lamb.  Star of the class, Anze from Slovenia, managed to perfectly duplicate Siegler’s demonstration lamb.   All were in awe, even Siegler.  The doctor’s efforts were also impressive.  Others, while perhaps less perfect, were acceptable.

Unfortunately not mine.  When he looked at my massacred meat, he pronounced: “You will have a filet instead of a rack of lamb,”   then proceeded with Formula I speed to show me how to remove the bones and fat from the lamb, leaving a filet.

At least I was not alone in failure. Lorraine from Shanghai also ended up with a filet. “We don’t cook like this in China,” she said.

Time was limited, so tasks were divided as we moved on. I opted for chopping and sautéing onions for the tian, figuring I could not screw this up.  And, I remembered his instructions.

We each were given an aluminum container to assemble our own tians with the onions and other veggies which we had sliced. These, and the racks of lamb (and filets) went into the ovens.  The reward:  We each had a tian and our lamb to take home.  My husband and I had rented an airbnb apartment.  I called ahead.  “Get a bottle of good red wine. I am  bringing dinner.” 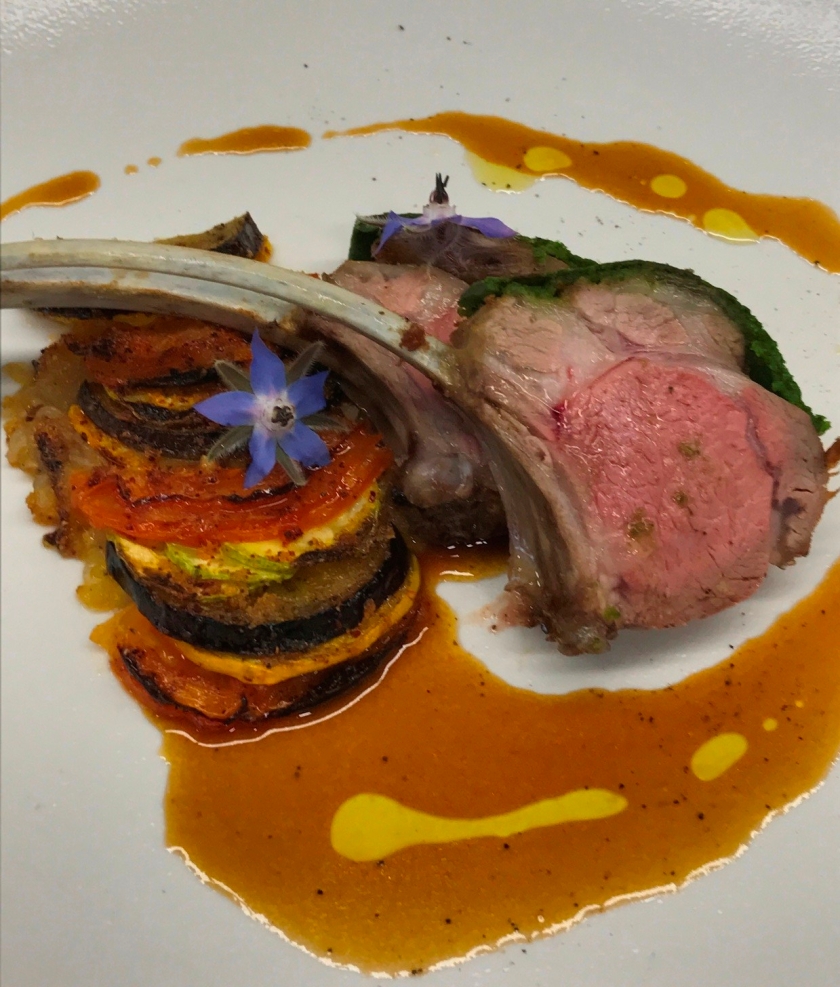 I may not have had the perfect rack of lamb, but the filet was superb.  The tian: delicious. Definitely a three-star dinner.  The day had been fun, enjoyable, and educational. I picked up many chef techniques which I have been putting into practice.   Next visit to Paris, I will definitely schedule another Cordon Bleu course… along with our visit to the dentist. And, I will arrive on time and pay close attention to all.

Put on the apron and get out the rolling pin.  Time for Christmas cookies.  See Today’s Taste, above right, and my recipe for Greek Crescents,  a winner of a cookie.

If not already a Tales and Travel follower, sign up (upper right). Your address is kept private and never shared.

Please feel free to comment.  Click below, scroll down to bottom of article, Leave a Reply and add your thoughts.

17 thoughts on “Aiming (and failing) to Cook like a Chef”