Merry Christmas to Tales and Travel fans. For all about Christmas in southern France, see my previous post, “Noel en Provence,” Dec. 2010. And, just in time for holiday reading, more Iceland:

“Of Horses and Men,” a strange but captivating movie about Iceland, piqued our curiosity about the country.   We saw the movie several weeks before departure for our Icelandic adventure. The horses were sensational. I knew I would have to ride an Icelandic horse.

I did earn a Girl Scout badge in horsemanship at the age of 12. Too, too long ago. But, I have always been enamored of horses and have ridden off and on (mostly off) since my childhood.   I am definitely not an accomplished rider, but riding an Icelandic horse seemed so easy in the film.

It’s the tölt, the fifth gait of these small, sturdy horses which were originally imported by the Vikings.   A trot? A running walk? Whatever, the tölt is amazing to watch. The horse moves at a gentle speed, precisely, rhythmically moving legs up and down, while the rider seems frozen to the saddle. No bouncing, jolting, posting.   “You can drink a glass of champagne while the horse tölts,” it is said. 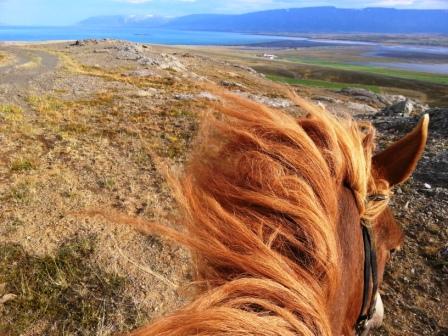 Forget the champagne, let’s just ride. And, we did, with Andres and Luka, a young couple who have 25 horses at their riding company in northern Iceland.    Husband VR (Vino Roberto) is (or was) dedicated to a bicycle saddle. He is not thrilled about riding a horse, but he put up a brave front and joined me and Karen, a woman from our conference group. We followed our leaders up and

down rocky hills, through fields, with superb views of the non-too distant sea. VR was not at ease. Those steep downhills freaked him out. He was all too happy to dismount so Andres could take Karen and me to flat land for at try at tölt.

We charged along, but I was bouncing, painfully jerking up and down, to and fro. I tried to post. No go. This can’t be the tölt. After about just 10 minutes of this agonizing experience, we gave up. Apparently it takes skill to get the horse to switch to this gait. Even Karen, who is a riding instructor in the US, was only briefly successful.

I am still happy that I rode an Icelandic horse. It is one of the many adventures touted in the tourist brochures.

Along our drive in the north country we encountered more horses, a roundup – exactly like the scene in the movie. Icelandic horses are driven up to mountain pastures where they roam freely during the summer. In the fall they are driven back to the lowlands. We stopped to watch the horses, corralled in different pens, being claimed, and then separated, by their respective owners. All the horses are micro chipped, we learned. Many wanted no part of leaving their summer friends and gave their owners a challenge, resisting attempts to move into different pens. It was an exciting spectacle. 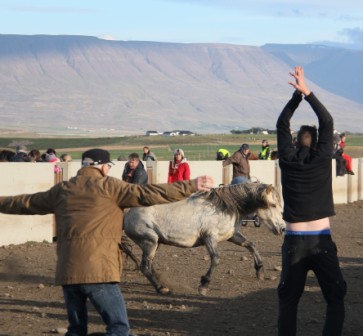 A few sheep were held in other pens . Sheep are as prevalent in Iceland as pigeons in Venice. They, too, spend the summer in the mountains. Most had been rounded up earlier. Those we saw were stragglers left behind who joined the horse procession to the valleys.

Horses and sheep are important to the Icelandic economy. But, not nearly as important as fish. Today the fishing industry accounts for about half of the country’s GDP. We joined a whale watching cruise but saw only a few tails of distant whales for nano seconds. Fishing was offered on board. It did not excite me, but I did brave the cold winds on deck to take photos of the fishermen and women. 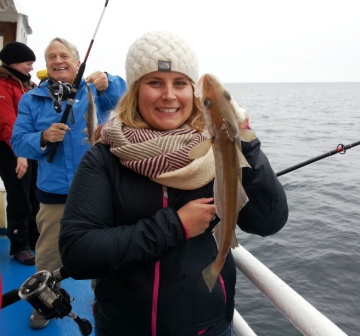 Incredible! Almost as soon as they would throw a line into the choppy sea, a bite. They hauled in fish after fish, sizeable critters, mainly haddock but some mackerel. One woman caught six in less than a half hour. This did excite me. I had to give it a try. Too late. All the hungry fish had been caught, or the word had spread underwater that this was a dangerous offering. No matter. A chef on board instantly cleaned and grilled the fish – fabulous.

A word about whales. Iceland, despite global condemnation, is engaged in commercial whaling. The country did respond to diplomatic pressure in 2012 and renounced hunting of fin whales. Minke whale hunting continues, mainly for export to Japan. I did see whale on some restaurant menus, but Icelanders are said to eat little whale.

“It’s all emotional. The countries who criticize us are doing far worse,” said a worker at a fish factory.

We had another fishy outing, joining a “Sea to Table” excursion. First stop, a smelly factory where fish are prepared for export. We were suited up for the tour – white plastic coats, blue hair nets, shoe cover-ups. A perfect Halloween costume.

Much of the fish processing is automated, but we did watch skillful employees undertake the initial step – off with head, out with the guts – at record speed.

The best part followed, a “grand crab feast” at a nearby restaurant, Vitinn, where mussels and other sea creatures are kept in live holding tanks. The restaurant’s claim to fame is rock crab, a marine delicacy found only in Icelandic waters and off the east coast of North America. The meal began with an exquisite crab soup, then a buffet of an overwhelming assortment of shell fish.

In the town of Höfn, I savored another sea delicacy, what Icelanders call “ lobster,” but is actually langoustine. Pricey, but delicious.

VR is not a vegetarian, but much prefers fish to meat. He was in his element in Iceland where fish is on every restaurant menu, usually many different kinds. Atlantic char is a favorite and tasty. What about all those sheep? Lamb, too, is on many a menu. Because the lamb graze freely all summer, chowing down on chemical-free grass and herbs, the meat is extra tender. We met an American woman, a frequent Iceland visitor, who takes large quantities of vacuum packed lamb home with her. 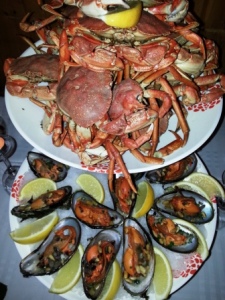 Fish and lamb aside, my favorite Icelandic food is skyr, a yogurt like concoction made from skimmed milk. It’s extra creamy , rich, decadent – but low in fat. It is often mixed with fruit flavors. Since food in Iceland is very expensive (see previous post “Incredible Iceland”) we often bought containers of skyr to have in the room for our after dinner dessert.

Iceland is paradise for adventure seekers with a laundry list of offerings: glacier hikes, trips inside volcanoes, scuba diving and snorkeling, caving, rafting…. We went for an ATV (All Terrain Vehicle) outing. These were heavy, monstrous vehicles. Again, a uniform was required: Bright orange coveralls, boots, gloves and helmet. The how-to briefing was that — brief. I let VR take the wheel, but had intended to give it a try during the ride.

I quickly changed my mind. We were a large group, about 18 vehicles, with a leader in the front vehicle and another bringing up the rear. Just 10 minutes into the ride, an abrupt stop.  We waited and waited, then got off and walked ahead to investigate what the holdup was.

A vehicle was overturned at the bottom of a cliff. Fortunately the driver and passenger had been thrown off and were lying on the ground above the crashed ATV.   It took time for assistance and medical personnel to arrive. The victims were taken to a hospital. Both suffered severe injuries, complicated bone breaks. After a stay in a hospital in Iceland, they returned to the U.S. for surgery.

The ride continued. My desire to drive was quashed.  VR said it was fun, but I found the journey too long and too cold. The scenery, like much of Iceland, was barren, bleak. It quickly became monotonous. 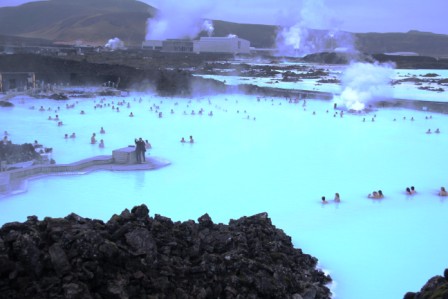 Never mind, we all went on for a soothing afternoon at Iceland’s number one tourist attraction: the Blue Lagoon, an enormous outdoor pool of geothermal water. There is even a bar in the center offering cocktails. And, a station with silica mud deposits to smear on your face – good for the skin and wrinkles.

I am a swimmer. I like to move in the water. These warm spa pools bore me after about 10 minutes. But, one cannot visit Iceland without a soak in the Blue Lagoon. A fitting way to end our two-week journey in Incredible Iceland.

Horseback riding with Andres and Luka, a delightful couple who invited us for refreshment in their home after the ride, www.Icelandhorsetours.com

No new recipe this time. But, the grape salad (top right) is fabulous, a perfect accompaniment to a holiday dinner.

Like my blog? Tell your friends. Feedback is most welcome. Leave a Reply below. Sign up (upper right) to become a Tales and Travel follower so you will not miss future posts. Your address is kept private and never shared.