Joyeux Noel!  In France, the main holiday event is the Réveillon, “un grand festin,” the big feast on Christmas Eve.

I invited British friends Mollie and David with their daughter Jenny and her partner Chris who had arrived from England at 3 a.m. on Christmas Eve after a long and harrowing drive.

The house is appropriately festive, decorated with some of my favorite treasures.  David and Chris took these outstanding photos.  I had to concentrate on cooking.

Food – a bit of a challenge as David and Jenny are vegetarians and Mollie, recovering from recent surgery, has certain dietary restrictions.  I scoured the Web for some new recipes, and also relied on some old favorites.

Our meal, with a few exceptions, was more like an American Thanksgiving, BB’s favorite. Since I was in the hospital this Thanksgiving (nothing serious), he missed out.  So, turkey it was with plenty of trimmings. 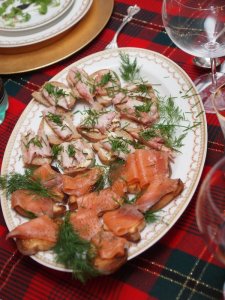 In France oysters and shell fish are the standard first course of this repast.  Instead, we had smoked salmon and smoked eel, both ordered from a fishery in Denmark.  The eel (cute fellow) had to be skinned and sliced.  I delegated that task to BB.  According to the instructions that came with the Scandinavian delicacy it is best  consumed with a shot of icy akavavit.  None in our liquor supply, so we drank champagne supplied by our guests.   The vegetarians had baked camembert with pears.  All were happy.

The next course would most likely be foie gras in France.  I love it and usually prepare my own rather than buying the ready- to- eat version.  It can be a culinary challenge.  I took the easy road and served Harvest Bisque, a Christmassy butternut squash soup served with a scoop of vanilla ice cream.  It is usually a hit.  The recipe is listed under recipes in column on right.

Next the bird.  No Butterballs in France. My friend Lynne, cook extraordinaire,

turned me on to brining the turkey several years ago.   The result: a moist turkey.

We had numerous (perhaps too many) side dishes:

Broccoli and Cheddar Casserole with Leeks (another Food & Wine recipe)

Red Cabbage with Ginger (combination of a German recipe and the recipe of my friend food writer Sharon Hudgins, www.sharonhudgins.com).  Germans serve this with Christmas goose.  David  tells me the British also serve it with goose.

It’s not found on the French table, but  I like it and it goes well with turkey, too.

Helen’s Brandied Sweet Potatoes (my mother’s recipe – a family tradition).  This is also listed under Recipes in the column on right.

Classic Sage and Onion Stuffing (Web recipe from The Kitchen).  I usually make stuffing with dried fruit and/or sausage. Those would not do this year.  This concoction did not send me. 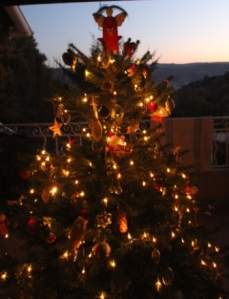 Preiselbeeren (German/Austrian berry, like a tiny cranberry). Austrians Klaus and Eva who rent our guest apartment for a month every summer, always bring us a jar of this treat.  They gather the berries in the forest and then preserve them. 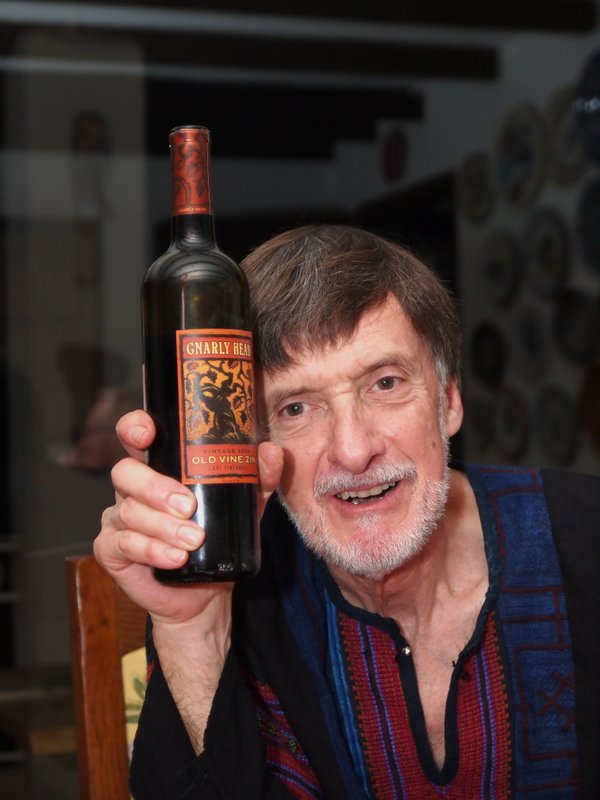 Desserts:  Tiramisu au Pain D’Epices (spice bread).  I frequently watch a French morning show, Télé Matin.  The recipe was given during a food segment last week.  Tiramisu is always a winner. With the spice bread, I thought it would be perfect for Noel.   A disaster.  It was tiramisu soup. The taste was not bad, but texture, a miserable failure.   I should have relied on Sharon Hudgins’ excellent recipe, my tiramisu favorite.

Pumpkin Pie. I know.  It’s usually a Thanksgiving dessert, but BB craves it.  It was interesting to see the British reaction to this all American favorite.  Irish friend Martine once said she “just did not get it.’  Chris said it was not sweet enough.  David liked it. Jenny – not sure.

Cookies – Five different kinds I baked the week before Christmas.

Not only did they bring the champagne and wine, but our guests came with Christmas crackers (not edible).  For the British, a Christmas meal is not Christmas without the crackers, paper gizmos with two ends.  You pull one end and the person next to you pulls the other.  Pop!  It explodes and a small Christmas present falls out.

For those of you who still have a holiday meal to savor, Bon Appetit. And, Happy New Year to all.  Tales and Travel will take a break until February.  We’re off on an exciting adventure to Myanmar soon, followed by a return to the paradise we discovered in Bali two years ago.  See previous post, A Dentist and his Jungle