They tied the knot in Agra, India, in April. We were invited to the festivities. Indian weddings are legendary, days of interesting, lavish events. This was something not to miss.

Two years ago on a trip to northern India with a German tour group, I met Alok. (see previous posts, Intriguing India and more ) He was our guide – affable, knowledgable and fun. He speaks fluent German, as well as English in addition to his native Hindi. Among the many wedding guests were others from his tours.

We wanted to follow customs, so we sought the advice of friends who had lived and worked in India. They looked over the invitation, a large elaborate card in bright red with gold lettering. Four events. Four different days. Each, we learned, required special attire. I was lucky. My friend Sigrid, a very talented seamstress, had been invited to an Indian wedding in London several years ago. She made two gorgeous outfits, both of a golden fabric that had been purchased in India. Perfect. I could borrow them.

Bob was not so lucky. When we arrived in Delhi, we showed the invitation to the

guide/driver who would take us to Agra. He agreed. Bob needed to go native and wear Indian clothing for the events.  We were whisked off to a classy shop where the salesman, after checking the invitation, convinced us Bob needed at least two Indian outfits. He tried to sell us three, but we stopped at two.

To make sure that we committed no grave faux pas, at our hotel in Agra I asked a receptionist to come to our room and check out our wedding wardrobe. She looked over the invitation and announced that my golden outfits were OK, but would not do for the main event, the actual wedding. For that, a genuine sari was de rigeur. Bob’s newly purchased Indian garb would do, but his shoes would not. He needed Indian foot attire, a type of slipper.

Determined to do it right, we set off to the bazaar the next morning. Bob refused to go for the slippers, but he did acquiesce and purchase a type of loafer. I bought a sari, sapphire blue, but later leaned that I should have gone for a brighter color.

The salesman skillfully wrapped the sari, nothing but a long piece of cloth (saris are from five to nine yards long), around me. No way I could ever master this. “Just google it,” he advised.

Festivities kicked off with the ring ceremony. Swathed in golden cloth, and Bob in his dark green sherwani (?), Indian tunic and his new Indian loafers, we set off to a hotel where the event, attended by several hundred guests, was held. As they paraded in, we began to feel very uncomfortable. The men did not wear traditional Indian garb, just basic western street clothes. Most of the women, however, wore colorful saris with their arms festooned in tiers of sparkling bangles.

The groom arrived wearing a business suit, albeit a very smart, stylish one. Bob was not happy, feeling a bit ridiculous in his Indian costume. (I thought he looked cool). I also felt my golden garb was way over the top. So much for the advice of experts!

As this was a Hindu wedding, no alcohol. There was an assortment of very tasty hors d’oeuvres. Folks mingled around and kept busy with cell phone cameras. There were plenty of photo ops for all, including several professional photographers. 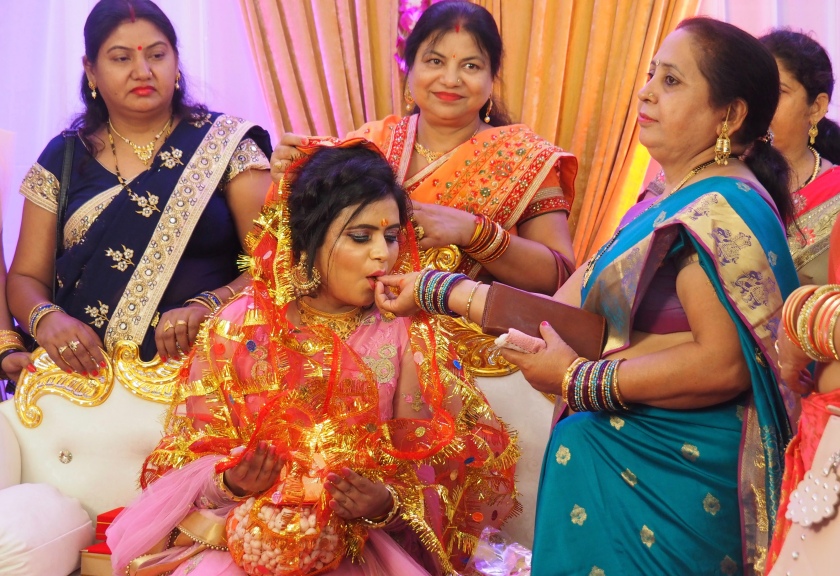 After the bride arrived, bejewelled and clad in a glamorous sari, ceremonies got under way. There were numerous different rituals: certain ones for the groom, others for the bride, and lots more photo ops.

We started to leave when the rituals ended — oops, not so soon. Guests were lining up in an adjacent room for a buffet. We joined in – delicious.

The following day Alok invited us and others from his tours to his home. We enjoyed chatting with the guests, mostly Germans, and savoring tasty delicacies, some prepared by Alok’s father. Alok had plenty of beer for his German friends.

That night a type of cocktail party and buffet hosted by the groom for his family and friends took place on the rooftop of a hotel/restaurant. Bob wore a sports coat, approved by the hotel receptionist. I ignored her advice and did not wear golden outfit number 2… fortunately. This was not a dressy affair. Not all Hindus are teetotalers, we learned. As this was Alok’s event, beer and Indian whiskey were available.

When it came time for the wedding, two days later, again I requested assistance from a hotel receptionist. No way could I google “sari” and conquer the wrap. Another helpful young woman came to the rescue and dressed me.  Bob wore the luscious red tunic (sherwani). He rejected the gorgeous vest and matching pants, but the Indian loafers were on his feet.

The wedding began with the “barat,” a raucous parade from the groom’s house to the party venue.

We first joined others at his home where he was seated at a kitchen table being dressed by his mother and others. They sang as they worked. This time he was in full traditional attire, turban and all.

The parade was incredible, dancing guests following a “band,” lots of horns and drums. Fireworks along the route added more noise. Traffic had to stop. The groom, seated high up in a horse-drawn carriage under a garland festooned canopy,   brought up the rear.

All manner of stands offing a wide range of food ringed the huge, open venue space. The bride and groom sat on a stage at one end. A band played. In addition to numerous photographers, the momentous event was captured by drone cameras.

Guests lined up to offer best wishes to the pair, showering them with rose petals. This went on for several hours, but the real wedding ceremony, more Hindu rituals, took place much later and was attended mainly by close family.

We will long remember Alok and Ankita’s wedding,  like no other.  And, just in case we get invited to another Indian wedding,  our wardrobe is ready.

A Word on Indian Weddings

In India, “When a baby girl is born, the family starts saving for her wedding,” said Sunil Kumar Nair, resident manager of the DoubleTree Hilton in Agra where we stayed. “The bride’s family pays for all. The boy gets everything,” he added.

Average cost: $50,000 to $60,000. That accounts for about 200 guests, but it is not uncommon to have many more, up to 2,000 guests with a corresponding price tag. During our stay, many weddings took place at the hotel, outdoors on the lawn in a football field – sized space.

And, many weddings that week in April all over Agra, a popular wedding site with its iconic Taj Mahal considered a symbol of love.

Wedding dates are decided by the Hindu calendar. There are two main wedding seasons, we learned, September to February, and April/May. A priest consults the horoscopes of the couple, the positions of the planets and the stars, and fixes the date. Sunil said one year on February 2, a particularly auspicious day, there were 80,000 weddings in Delhi.

Alok and Ankita’s marriage was arranged, as are about 80 percent of marriages in India. It usually starts with a search in the Sunday Times of India: a full page of “Wanted Grooms” and another of “Wanted Brides.” The ads are divided into categories by caste. India has four main castes, and it is important to marry within one’s caste. Both Alok and Ankita are Brahmins.

When a probable match is found, background info, references etc. , are exchanged. If all looks good, the parents meet. If that goes well, the couple meets with the parents. Alok first met Ankita during a stop at a highway restaurant on one of his tours.

Sunil said traditions are changing, and more and more couples are marrying for love. Yet, the arranged system has its merits. According to one source, the divorce rate in India is the lowest in the world.

After the wedding,  we toured spectacular Rajasthan.  More in coming posts.  Don’t miss out.  If not already a Tales and Travel follower, sign up, upper right.  Your address is kept private and never shared.

Comments welcome . Click below then scroll to the bottom and let me know your thoughts

11 thoughts on “Alok and Ankita’s Wedding”