Wow! There he was, lounging high up on the rocks. Magnificent. Gorgeous. Bhamsa, a 3-year-old male leopard. On a previous safari in Africa, then one in Sri Lanka, I had hopes of a leopard sighting. No luck. These cats are secretive, elusive. 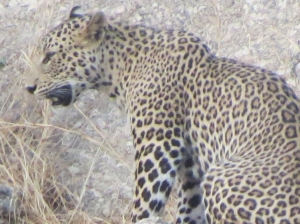 We were in the rugged countryside near Narlai, a rural village in Rajasthan, India. Just us, a guide and the jeep driver. First we bounced around the back country near our hotel, off roads, into fields, through bush, stopping frequently to scour the landscape. A few peacocks. Antelope. Errant cows. Nary a leopard. I was more than disappointed, certain this would be yet another failed mission.

Abruptly the driver turned around, backtracked through the village, on to a major road, racing like police on a chase. Hold on! A sharp turn onto a dirt track through rugged, barren terrain. The chase intensified.

As we approached a range of rocky slopes, the vehicle came to a speedy halt. “There, up there, a leopard.” Leopard? Where? I had a hard time finding him. Those spots and the beige coat blend in with the background. The guide gave me his binoculars. Yes. There he was. Awesome. 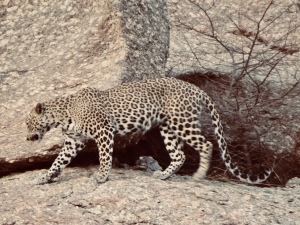 We watched Bhamsa, mesmerized. He stared at us. My Olympus lens was not long enough for photos, but the guide took many with his Canon Power Shot and sent them to me on Whats App.

As we marveled at our leopard, out of nowhere appeared a young man with masala tea (an Indian special with spices), sandwiches and cookies. Also awesome.

We learned that eight leopards make their home in this region which is not on the popular Rajasthan tourist trek. Each leopard has his own territory of about 14 kilometers.

Bhamsa grew bored watching us, slowly stood up, stretched his long, lean beautiful body and moved on, jumping onto rocks out of our sight.

The excitement, the thrill of viewing wild beasts — be they gorillas, elephants, lions, leopards — in their natural habitat is like no other. I can’t get enough.

India rewarded us – not just with one leopard, but two tigers. We joined a group safari in Ranthambore National Park, a vast wildlife reserve in Rajasthan and home to 68 tigers. This time we were in a jeep with four others, some of whom had been on many tiger safaris and had interesting tales to tell.

On our morning trek we saw the imposing 10th century Ranthambore Fort up on a hillside, as well as the ubiquitous peacocks and antelope. Leopards also make their home in the park, but it is the tigers for which it is known.

After several boring hours, a tiger was spotted. That is, someone spotted a tiger. Again I failed to see it. This feline was sleeping in the brush, well camouflaged. All that was visible was the head. We drove around to another spot for a better view, soon followed by vehicle after vehicle. Word had spread fast.

We, and at least 12 other vehicles filled with eager eyes, waited and waited. My patience was dwindling. I had seen enough of the tiger’s head. The guide knew best. The tiger would wake up.

It did. He sat up for awhile, taking in the conglomeration of vehicles, perhaps hoping we would disappear. No way. Not concerned, after a bit he headed in our direction, closer and closer. Even my Olympus could handle this. Ranthambore tigers are obviously accustomed to an audience.

And, not far behind, another stunning tiger. They were brother and sister, 1½ year old cubs, we learned. They paraded by, the female following her brother, remarkably close to the safari jeeps.

Too close for comfort was the tiger which jumped in front of a resident at our lodging, Khem Villas, located in the wilderness on the edge of the park. The gentleman from London decided to take an early morning stroll (5 a.m.) and was standing by the pool when the tiger jumped from a wall. He froze. The tiger went her way. All was well. We later learned that a few days earlier another resident had spotted the tiger drinking at the pond on the property. I was not so lucky, but I was overwhelmed with the footage of the same tiger, a mother with two precious 2-month old cubs dutifully following behind, that had been captured by the hotel motion camera.

According to the staff, the tiger has left the park in search of new territory to protect her babies from a sex-hungry male. The latter are known to kill the cubs of a female if they want to mate. Khem Villas advises residents not to stray from the complex. Barriers are erected at night.

One of our vehicle mates, a young man from Mumbai, knew more about tigers than the guides. He had been all over India on tiger safaris. I was fascinated with the story of Machli,a famous Ranthambore tiger, “the most photographed tiger in the world” who died at the age of 20 in 2016. She had seven liters of cubs and is legendary for killing a huge crocodile. Google her. There are pictures of the crocodile kill, and her funeral.

Our fascinating 11-day tour of Rajasthan was organized by Wild Frontiers. www.wildfrontiers.co.uk

After returning from India about a month ago, we launched into house sale, a big project which has left me no time for blogging.   We must downsize and hope to move close to the Med. I have missed blogging and have much more to tell about India, and Egypt,  and where we may move.  So stay tuned.

If not already a talesandtravel follower, sign up, upper right. It is safe. Your address is kept confidential and not shared.

Comments welcome.  Click below: “Leave a Reply,” then scroll down to end of post and add your thoughts.