Not every trip is paradise perfect.   I’ve had my share of travel mishaps. In Buenos Aires, three gold chains were ripped from my neck (my fault for wearing them).  I missed out on an excursion to the Brazilian side of Iguaçu Falls because I did not have a Brazilian visa.

The trip had been prepaid, but the travel operator failed to tell me that as an American I needed a visa, and there was no time to get one.  $100 out the window.  In New Zealand, I was so excited about the chance to swim with dolphins – something I’ve always wanted to do.  Alas, I swam in frigid water, but nary a dolphin to be seen.  (I’ve written about these catastrophes in previous posts. “Misadventures in New Zealand,” Apr.27, 2012;  “Cry for me Argentina,” Oct. 30, 2010; “Iguaçu Falls,” Nov. 19, 2010 )

Last fall husband Bob and I had some frustrating experiences thanks to GPS.  We are slow to get on the technical bandwagon, but finally decided to purchase a GPS gadget for this drive trip.  All went well in Germany.  Without it, we might still be driving around looking for some of those off-the- beat- and -track hotels I had booked.

When we got to northern  Italy and were trying to find my friend Trina’s apartment on Lake Varese, another story.  Suddenly we were crossing the border into Switzerland as directed by our GPS mentor.  (She’s British, and her pronunciation of Italian, French and German  street names is abominable, but good for a laugh.)

This can’t be right?   What’s with this wacko woman directing us?  What’s with GPS?  We stopped at the nearest gas station, and were told she was all wrong.  Reverse directions and go back to Italy.  We eventually found Trina, but with a map.

After the Italian/Swiss mishap, I verified GPS instructions with a map.  Until we were driving back to France on the autostrada in northern Italy, a stretch we had driven many times.  I relaxed. All seemed well.  Then out of the blue  we ended up at the toll booth for the Frejus Tunnel, 39 euros, no turning back.  Strange.  We had not remembered going through this tunnel before. Perhaps our GPS genius  knew a shorter route?  We had no choice but to continue.

It’s a long, long tunnel.  When we emerged, I checked the map.  Holy S—!  Where are we?  We had driven far out of our way to get home.  And, that GPS crackpot was leading us farther astray.  So much for advanced technology.

Time for another gas station inquiry. I was obviously distraught,  thinking about all those extra miles and hours lost.  The kind woman in the gas station took pity on me and explained that we had two choices, one route via Grenoble, much longer but all on the speedy autoroute, and one over the Col du Galibier, a slow but scenic mountain pass.  We opted for scenery. It was an adventure, up and up a twisty road into the wilds of mountain tops with no civilization in sight, but incredible views.  It was getting dark and this was not a road for sissies, so we took no time to stop and ponder the surrounding beauty. But, it’s a drive to repeat.  Sometimes bad leads to good.

And, sometimes, as with the jewelry theft in Argentina, you learn from the disasters.  Such was the case in Singapore.  I needed a few accessories for my new camera.  This was the beginning of a long trip, so best make the purchases here.  We paid a visit to a camera shop in Singapore’s Chinatown where a very eager and fast-talking salesman convinced me to buy, not only the needed accessories, but a few other items – including a very costly filter, which, he cleverly demonstrated, would do wonders for my photos.  I was taken in and made the purchases – over $400 worth.

As we ate lunch, I pondered the purchase.  Something did not seem right.  Should they have been that expensive?  I went back to the hotel and checked the items on Amazon.  I had been royally ripped off—the total for the items at Amazon prices would have been no more than about $50.  How stupid I was.

Not to be outdone, I printed out copies of all the Amazon data and marched back to the photo shop for a confrontation. I was all smiles and friendly and took photos of our chatty salesman before presenting the evidence of his deceit. I threatened to put his photo and the shop on Facebook with a warning if he did not give me a refund. The manager, another slick operator, appeared.  He was wary and not about to risk bad publicity.  I could have the refund, but first he wanted to delete the incriminating  photos on my camera.  I obliged, took my money and ran.

Back at the hotel, I related the experience  to the desk clerk who had helped with the copies.  Never do business in Chinatown, he said.  And, never be so dumb and shell out big bucks for items if you have no idea of the going price.

No trip is without some minor aggravations.  In Sydney, when we purchased our tickets for an opera house tour, we were given coupons for a free cup of coffee valid until 5 p.m. at the opera house café.  We showed up at 4:40 pm.  “Sorry. Too late.  We had to close early today.”  No big loss.  Back to the hotel, but by bus as it was raining. We waited and waited.  Finally bus number 53 came.  We proceeded to pay the driver for our passage.   ”Sorry.  No tickets sold on buses after 5 p.m. “  They must be purchased ahead at a ticket office, he explained, but we weren’t about to track down the office, which, by then, probably would have been closed anyway.  O.K.  We’ll take a taxi.  We wandered from street corner to street corner and hailed many a taxi.  All full.  Distressed and soaked, we gave up and trekked in the rain back to the hotel – a good hour’s walk.

Not our lucky day, but far worse could happen. It’s all part of the adventure that can make travel a challenge – and an educational experience.

Black Bean Pumpkin Soup was the overwhelming favorite at a lunch I recently prepared for friends. Several requested the recipe which is listed in the column at right. 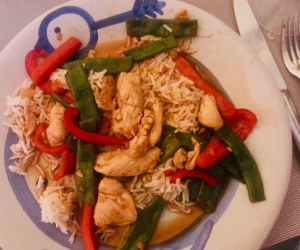