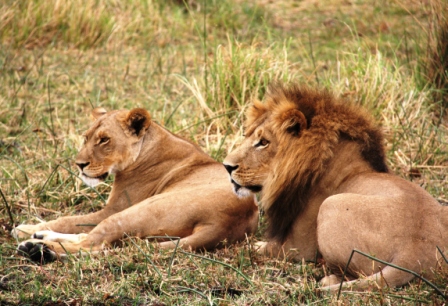 The Big Five – almost. The leopard, the most secretive and elusive of cats, escaped us, however we were hot on a leopard trail more than once. Sightings of lions, elephants and Cape buffalo were plentiful. We even saw one rhino. Impala, giraffes, zebra, various antelopes, crocodiles, warthogs, hyenas and lots of birds were also captured on our cameras.

(A previous post was devoted to gorillas in Rwanda, “Gorillas in our Midst,” truly the most outstanding animal experience during our African adventures.) Subsequent visits to Botswana, Zambia and Zimbabwe were nonetheless rich, rewarding, often exciting, and always educational. Following are highlights of our animal encounters.

ELEPHANTS: These massive creatures are a source of wonder. We spotted them in all three countries, and learned much about them. Botswana, specifically Chobe National Park, is home to 65,000 elephants. They eat 18 hours per day, as much as 150 kilos of food per day. In Chobe, most all the trees are bare, stripped clean by hungry elephants. During a Learning and Discovery session, we were told that one elephant requires about one square kilometer of space.

Chobe encompasses 11,000 square kilometers – clearly not enough for such a large elephant population. It is a dilemma. Sterilization or translocation is too expensive for the country. Furthermore, translocation does not usually work as elephants, no matter how far from their original home, will head back. Culling has been considered but would generate negative publicity that would surely cut down on tourism. “What can we do?” our lecturer asked. Anyone have any ideas?

Super large elephants with gigantic tusks are rare. Most have been taken out by poachers and/or hunters. In Botswana, guards “shoot to kill” poachers. The country has fewer poaching problems than many other countries, and has banned safari hunting. 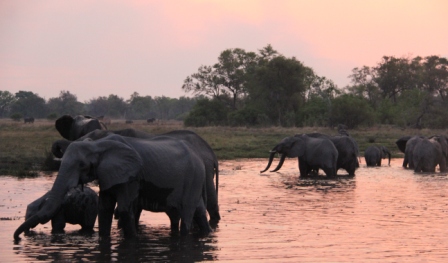 We marveled at solitary elephants munching on trees, large groups marching to rivers and mothers with babies in tow. Elephants can communicate for great distances with a rumbling sound, and other sounds not audible to humans. They can run at speeds up to 25 mph. If you happen to be charged by an elephant, do not run. “Stop and clap and shout.”

LIONS: None of our safari group was charged by an elephant , but one angry lion did charge an open safari vehicle. The driver saved the day and raced away at great speed. We had numerous lion sightings – magnificent, astonishing, brutal, gruesome. More than once we witnessed lion sex . No wonder. They are champion copulators, we learned, — up to 100 times in 24 hours. A male and female can be at it more or less nonstop for three to five days – without Viagra.

“This is National Geographic stuff,” our guide Abiot commented after we had watched a mating couple. Later that day, more National Geographic – too much for some. The Kill. Along the side of a road, a group of eight female lions was in the process of attacking and eating a live Cape Buffalo. It was bloody. It was fascinating. It was agonizing.

The poor beast struggled to stand up, only to fall down and groan in pain. The killer team took turns. A few would lunge and bite, while others rested and observed. We watched and photographed for at least 20 minutes, but had to move on to our next camp. We later learned from the bus driver who passed the scene many times that the buffalo’s suffering went on for three hours before he succumbed.

“This is a training session,” Abiot said. “These lionesses are young. They are not skilled at killing.”

I had naively assumed that when killing lions went for the jugular to put the prey out of its misery. That is far too dangerous with Cape Buffalo due to the horns. For this reason, Cape Buffalo, considered the most dangerous of African animals, are rarely attacked by lions.

Elephants are also not normally targets for lions. “Most lions are afraid of elephants,” a guide said. Even lions have enemies. Honey badgers – small but fierce – can kill a mighty lion. “They are very clever. They go for the private parts. If you ever encounter one, back off,” we were warned. We did see one along a safari track. The driver floored for a close-up view. The petite creature stopped and bared his teeth at us, as if daring us to get any closer.

A group of baboons can also kill a lion. They have very sharp teeth. They are also mischievous. Several broke into the tent of a couple in our group. No real damage was done, but all their belongings were helter skelter.

HIPPOS: It is rare to see more than the heads of these giants which spend most of their days submerged. They do emerge from the water at night in search of food, eating up to 45 kilos per night. During the day they must stay under water because the sun cracks their skin, and they have no sweat glands. They are fast and can run at speeds up to 34 mph.   Because of the weight of the male, hippos mate under water. Babies are born in shallow water and stay with their mother for up to eight years.   A canoe guide in Zambia where we spotted hippos on a game viewing boat excursion complained that business was down due to an erroneous report on Facebook that hippos are the most dangerous animal in Africa. Not true — the Cape Buffalo as mentioned above.

RHINOS: It was at a private game reserve in Zimbabwe where we saw one rhino. Three rhinos were introduced to the reserve in 2000 and six more

have been born since. The reserve has an anti-poaching team who live on the grounds.   Rhinos are dehorned every two to three years to discourage poachers, but they are often killed nonetheless. Poachers don’t want to waste time tracking a rhino only to learn it has no horns, so they eliminate all. Horns do grow back.

Horns are sold to powerful criminal syndicates who ship them to Asian countries, including Vietnam and China where their weight is valued at more than gold due to the erroneous belief that Rhino horn can cure everything from cancer to hangovers.

It’s a thrill viewing these creatures up close and leaning so much about them. As fascinating and wonderful as the animals are the people. Coming soon:  Adventure Africa: The People.  If not already a Tales and Travel follower, sign up (upper right) so you will not miss future posts. Your address is kept private and never shared.

Our 16-day safari was organized by Overseas Adventure Travel, www.oattravel.com We paid $4,495 each for the all-inclusive package (lodging, all meals, most tips, land and air transport within Africa). 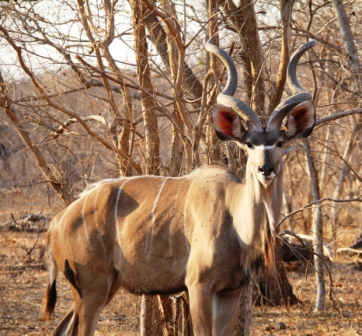 Like my blog? Tell your friends.  Please leave a comment – if you can’t see the Recent Comments list below, use the link on the right-hand menu (below “Recipes”). Feedback is welcome. I love to know what my readers think about my posts.

9 thoughts on “Adventure Africa: The Animals”