Skip to content
A happy — and most important – healthy New Year to Tales and Travel readers. The following is another post resulting from Adventure Africa.  Before visiting Rwanda, two words sum up what I knew about the country: gorillas and genocide. My previous post, Gorillas in our Midst, details our unforgettable gorilla trek. The following provides a look at Rwanda 22 years after savage butchery took the lives of almost a million of its citizens.

Rwanda’s mountain gorillas are a national treasure, one that has reaped significant financial rewards for this tiny country in central Africa. Revenue from tourism was $303 million in 2014, up from $62 million in 2000 – mainly due to the gorillas.

These gentle giants that hang out in the bamboo forests of the Virunga mountains are a source of wonder. Small groups of tourists follow a guide and a tracker into the dense jungle to find and observe a gorilla family. The tracker wields a machete, a common tool in Rwanda, to blaze a trail. But in Rwanda, the machete also has a sinister significance.

“The world withdrew and watched…and a million people were slaughtered.”

The machete was the weapon of choice during the horrific genocide that ravaged Rwanda in 1994. Hutu-Tutsi rivalry culminated in this bloodbath with Hutu rebels on the warpath, hacking Tutsi and moderate Hutu to death.

Driving through bustling Kigali, the country capital, it’s difficult to imagine that these boulevards now lined with neatly trimmed shrubs and flowers were littered with thousands of bodies 22 years ago. The Kigali Genocide Memorial in the country’s capital pays tribute to the victims. Its exhibits are an all-too vivid reminder of the carnage: photos and letters of the dead, accounts of survivors, details on child victims, such as favorite toys and food. It is shocking, heartbreaking, disturbing, chilling.

Some 250,000 victims are buried in mass graves at the memorial site on a lush hillside overlooking the town. Exhibits also trace the history of the ethnic rivalry, the failure of the world community to step in, and reminders that Rwanda is not the only country tarnished by genocide.   Germany, Cambodia, Namibia, Serbia, Turkey – all have dark chapters in their past. Three million people fled to refugee camps in neighboring countries to escape death. David Habarugira, our guide in Rwanda, fled to nearby Uganda. Rwandans are now at peace, he explained. No one is identified by ethnic background. Many, like David, have returned to their homeland, the Land of a Thousand Hills where steep mountains and deep valleys create a breathtaking landscape.

“Rwanda is a country with a vision…better education, health care, infrastructure. .. We are well on our way,” Francis, another guide commented. The economy suffered greatly during and after the genocide, but has made strides in recent years. Gorilla revenue plays a role, with 80 percent earmarked for the government.

Subsistence agriculture, however, is the mainstay of the economy in Rwanda which is slightly smaller than Maryland. Some 90 percent of the population of almost 12 million farm. David, from a farm family, told us he did not have a pair of shoes until he was 20 years old. 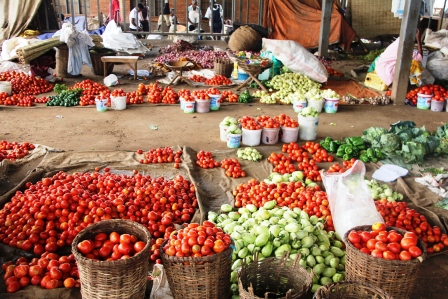 Anything and everything grows, with coffee and tea the main export crops. Markets are full of vibrant color with mounds of produce for sale, including five different kinds of bananas. The national dish is green bananas, ibitoke, steamed and mashed. 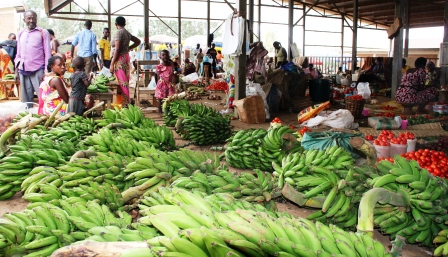 Paul Kagame, who has been president since 2000, is credited with stabilizing the country and reviving the economy after the mass killings. On Dec. 31, 2015, he announced that he will run for a third term in 2017 after his second seven-year term expires. In a constitutional referendum last month, 98 percent of Rwandans voted to amend the constitution to allow Kagame to run again.   Despite his accomplishments, many see him as an authoritarian ruler.   His government has been accused of human rights abuses, including restrictions on freedom of speech and suppression of opposition groups. The US and the EU oppose a third term for Kagame.

On the positive side, Rwanda has low corruption compared to other African countries.   According to Wikipedia, it is one of only two countries with a female majority in the national parliament. Protection of the environment is de rigueur. Plastic bags are banned throughout the country. It is now illegal to cut papyrus, often used for building, since it filters swamp water, David explained. And Rwanda is tourist friendly – safe and delightful to visit, although some of the tourist sites are harrowing.

The memorials at Nyamata and Ntarama, about 30 kilometers south of Kigali, are among these. During the genocide, citizens took refuge in churches, assuming they would be safe. However, members of the clergy are said to have provided information to the rebels. Some of the most brutal massacres took place inside the holy shrines, including the one at Nyamata where skulls and bones of the dead are displayed.   At Natarma, blood-stained clothing still litters the floor.

Despite the betrayal by some of the religious, faith is very strong in Rwanda with most citizens practicing Catholicism or another Christian faith. En route to the departure point for our gorilla trek, on muddy roads full of ruts, we witnessed a steady procession of the faithful in their finery, most with Bibles or prayer books in their hands, on the way to Sunday services.

Rwanda has three official languages. Kinyarwanda is spoken by most, followed by English and French. Rwanda was under Belgian rule until gaining independence in 1962. In 2009, the country joined the British Commonwealth although it has no colonial ties to Great Britain. “Pre genocide, we were Francophile, now we are Anglophile,” said David, who speaks English. 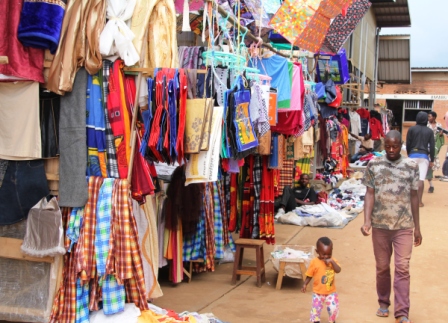 On our drives through the countryside past poor villages where goats and cows roam freely, I asked David why there were no dogs or cats. “We prefer children,” he said. Everywhere, happy, exuberant children waved at us.

As Francis said, Rwanda is “well on the way. ” It still has far to go. Sanitation is poor. In both rural and urban areas most use shared pit latrines. The majority of the population has no access to electricity. Yet, many have cell phones.

As my previous post pointed out, a trek to see Rwanda’s gorillas is very expensive. It is gratifying to know that the revenues are contributing to improve living conditions for its citizens. Gorillas also mean jobs: guides, trackers, porters, drivers, and hotel staff. We were overwhelmed by their friendliness, kindness and joie de vivre.

“A new found air of optimism pervades the country,” states Lonely Planet. It’s an optimism that is a joy to experience.

Scroll down for more Rwanda photos. More Adventure Africa to come in future posts: On Safari, Animals, People… If not already a Tales and Travel follower, sign up (upper right) so you will not miss future posts. Your address is kept private and never shared.

Hungry for a hearty and tasty winter soup? The recipe for East German Soljanka is perfect. Try it. You won’t be disappointed. Click on photo, upper right.