Christmas markets are everywhere these days.  But none can compare with the original version in Germany.  I miss the real thing, those romantic, storybook holiday markets:  tiny twinkling lights (usually white or golden – not a jumble of gaudy colors), hot glϋhwein, savory sausages, spicy cookies, church bells, Christmas carols – all basking in German gemϋtlichkeit.

Since I am usually disappointed with French Christmas markets, I rarely visit them. Grambois was an exception. I read that this nearby perched town would

start the holiday season early with a Christmas market this weekend, Nov. 16 and 17.  And, an American, the Provence head of a charitable organization, Calcutta Rescue, would be there with a stand selling items made by poor Indians.

There are plenty of Brits, Dutch, Belgians, and some Germans, living among the French in this picturesque part of France.  But, very few Americans.  I wanted to meet him and learn more about Calcutta Rescue.

Glen Kendall, originally from Grand Junction, Co., lives with his Dutch wife in this burg of 1100 citizens.  He had been working for a software company in London when he saw an ad for an administrator for the Calcutta based charity.  He got the job and was off to Calcutta for a year.  He said he’s been to other parts of India, but nothing prepared him for Calcutta. “It’s full of energy 24 hours per day, chaotic, filthy, polluted.”  He lived in a Muslim slum where the electricity worked about two thirds of the day.  The people made the job.  “The poor people have a joie de vivre that’s inspirational.  It makes you happy to be alive. It’s hard to believe they live under a piece of plastic.”

Calcutta Rescue (www.calcuttarescue.org) helps the indigent of Calcutta, most of whom live on less than one euro per day.  The organization runs three medical clinics and supports more than 600 poor children, most living in the streets, providing them with funds to go to school, clothes, two meals per day and medical care. A handicrafts project was started to teach former clinic patients how to sew.  They learn a skill which can help them survive.   They make clothes and handicraft items (cards, bags, embroidered napkins, etc).  The latter are offered at the Grambois Christmas market. I especially liked the small embroidered bags containing Indian spices. 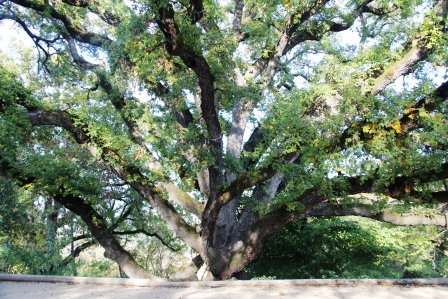 Kendall saw that I had a camera.  “Let me show you something most visitors to Grambois don’t see, “  he said.  He led me outside of the old village, down some steps to an incredible tree, a multi-trunked oak thought to be more than 300 years old.  And, he told me where to wander for more photos.

We frequently drive on the main road below ancient Grambois. One time we followed the twisty road uphill to the village, but did not get out to explore.  Now was my chance. It’s worth a trip.  The town’s origins date to the 11th century.  Vestiges of 14th century walls still stand.  There’s a Romanesque church, a bell tower, a fountain, and meandering stone alleys – all restored.  Plus, lovely views of the Luberon hills.

Those hills were alive with a rainbow of fall colors glowing in the strong Provencal sunshine.  It was warm – not at all like Christmas.  But I am glad I visited this holiday market and discovered Glen Kendall, Calcutta Rescue and inviting Grambois.

I am happy to hear from readers.  See “Leave a Reply” below under Comments. Subscribers also welcome.  Don’t miss future posts.  Click on Email Subscription at top right.

7 thoughts on “Grambois gets a jump on Christmas”