The pool at Les Rosiers, our home, did not turn ghoulish green as it has in past summers.  None of the precious roses died. We had wonderful tenants in our

It kicked off in June with the arrival of Klaus, an Austrian from Graz.  He and his wife Eva have been staying in our gite (French for vacation rental) for a month every year since 2010.   Klaus arrives first, by car, roof rack loaded with supplies, including Austrian beer and food staples. On the way home, a large supply of wine takes the place of those goodies.    Eva is a legal secretary.  She comes by plane a week after Klaus arrives.

They know the area well, have friends here, enjoy revisiting favorite places and hanging out poolside.  Klaus loves to cook.  He brought his own knife sharpener this year.  The one I supplied was not up to snuff.  And, he loves to grill – lamb and sausages are his favorites. This year his grilling almost led to disaster.  The morning after a previous day’s use of the grill, he emptied the ashes which he assumed were dead in the wooded area of dried leaves behind and adjacent to our house.  That afternoon I was in the pool.  I noticed smoke, but I assumed he was grilling again.  Suddenly BB (husband Bicycle Bob) came flying down the steps from our balcony.  He had seen flames.   Indeed, the ashes had sprung to life and a fire had started.  It was frightening.  But, all to the rescue with hose and buckets of water.  Catastrophe was averted.

Eva is a walker, often up at 7 a.m., setting out on a trek in the area for two to three hours. Klaus also hikes and gathers herbs and berries (juniper) and other treasures from the forests and fields.  He left me with a supply of bay leaves which I have dried. Another of his favorite pastimes is visiting flea markets.  During summers here, there are many on the agenda.  He always finds interesting bargains.

Stepson Rob and his boys, Samuel and Lang, followed Klaus and Eva. The boys, both swimmers, loved the pool, as well as jaunts on foot to the bakery every morning with their dad.  They could not get their fill of croissants.  According to Rob, Samuel still asks when he can come back and get more of those croissants, which he called “amazing.”

The Gorges du Verdon, the Abbey of Senanque and Colorado Provencal were highlights for Jean and Alex, a charming couple who stayed for a week.  He is French, lives and works in Colmar.  She is German, originally from Leipzig, and now working for an international organization in Geneva.  They both are multi-lingual, and, like many of our visitors, especially enjoyed the “calm” at Les Rosiers.

They were followed by a couple we felt were a bit strange, if not unpleasant. He always had a scowl on his face, never a smile,  and once complained that the refrigerator was not cold enough (easy to fix – just turn up the dial.)  They went off sightseeing and came back to lounge by the pool, but barely said a word to us.  I assumed they were not happy with our

accommodations.  I dared not ask them to write in our guest book.  Wonders never cease.  They did write:  “Thanks to your hospitality we have discovered the pleasures of Haute Provence…we have appreciated the coolness of your gite, the refreshing swimming pool and the calm of the surroundings.”

Roberto and Francoise from Fribourg, Switzerland, are fantastic. She is a teacher for handicapped adults – and a cat lover .  She was smitten with Filippo, my rambunctious male cat. Roberto, originally from Uruguay, came with hisbicycle.

Unfortunately Francoise fell in our new pergola/State Park Picnic Shelter (SPPS) and broke her foot. They took it in stride, did not complain, and continued their stay.

As her mobility was limited after the accident, Francoise was content to sit in the yard, often with Filippo at her side, and read while Roberto rode his bike.   Like Klaus, she was into wild herbs:  garlic, fennel, rosemary, thyme.  And oils – lavender, almond and olive. She gave me instructions on treatments using lavender oil.

Time for the British, Elaine and Paul from southeast London, who kept on the move and visited sites near and far (Arles, Pont du Grad, Gorges du Verdon, Bonnieux, Gordes).  Elaine is an assistant for children with special needs at a secondary school. Paul is a quantity surveyor for a construction company. They also enjoyed Filippo’s shenanigans.  Paul said Les Rosiers is “the quietest place we’ve ever been to.”

Elizabeth and Igor from Normandy stayed two weeks.  They overwhelmed us with dinner invitations. Igor also likes to grill. While I was away, he invited Bob for grilled sausages. When I returned we were invited for grilled beef.  And, yet again for an apero.  We expected the usual chips- nuts- and- olives apero.  But this was an “apero dinotoire,” something new to us,   a multi-course meal:  crackers and tomatoes, then grilled lamb with a rice/tuna salad, a potato salad, and fruit.

Igor arrived with easel and paints.  He set up in the yard and created lovely scenes. We received one as a going-away present.  He is a financial consultant in Paris, and commutes home to Rouen on weekends.  Elizabeth, who was recovering from breast cancer surgery, said she came to the Luberon to “relax.”  They did visit some neighboring towns.  “We like typical, tranquil, original villages,” she said, mentioning nearby Viens and Vacheres.  They also raved about an attraction we have yet to visit, the Ganogobie Abbey.

Summer wound down with the visit of stepdaughter Kellie.  She gave BB a chance to live up to his name.  They bicycled a few times before her boyfriend arrived for a week.  We all set off to Marseille together and were in awe of the new architectural masterpieces. 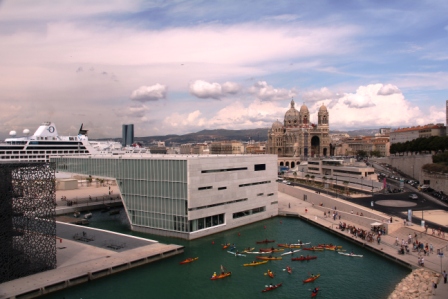 It’s still warm in Provence, but the pool waters have chilled. We’ll put the pool to bed for winter soon.  But, I can look forward to starting swimming early next spring.  We’ve purchased a heat pump for the pool.   Summer 2014 may top summer 2013.