I felt I should have been reporting for  Bon Appétit magazine.  It was one of those fabulous food and people spreads – a multi-course meal in the huge, homey kitchen of a 500-year-old house in a tiny Italian village shared by Italians and Americans.  And, I was lucky enough to be part of it.  Too good to be true.

Thanks to our friends Noel and Carol, whom husband Bob and I know from our days together in Germany, we were included in this memorable feast which went on for five fun-filled hours.  Noel and Carol have retired to northern Italy where they enjoy la dolce vita.  We were their houseguests.

The lunch hosts:  Fabio and his American wife Victoria.  Fabio is a vintner (www.policreti.it)  with a passion for precious gems as well as grapes.  He has been trading in gem stones since the age of 18, worked for the up market jeweler Bulgari in New York as well as in Italy, and is also dedicated to restoring his

family’s ancient home, Palazzo Policreti Negrelli in Aviano, which has 47 rooms and has been in his family for more than 200 years. The original owner, engineer Luigi Negrelli , played a significant role in the construction of the  Suez Canal.

Fabio  met his warm and gracious wife  Victoria in California.  She is employed by a German construction company as a translator and much more.  “I am lucky to have an American wife,” says Fabio.  “Italian women often have headaches or give you headaches.”

The guests: In  addition to me and Bob, Noel and Carol, seated at the table were  Riccardo and Zeta, two jolly Italian characters who have known each other since the age of 3, met Fabio  in Los Angeles years ago, and call themselves “professional  travelers.”    Riccardo said he “doesn’t belong to one place,” while Zeta calls himself  “a man of the planet.”   ”We can’t retire, we don’t work,” explained burly Riccardo, who says he has four wives, each in a different country, and claims his only possessions are “an old car and a bicycle.”

Zeta, a chef,  does work six months out of the year at his brother’s restaurant in Greenville, S. C. “When Zeta visits us the first question is ‘what’s on the menu?’  His creations are famous at our hose,” says Fabio. “Instead of making a grocery list, he just looks in the refrigerator and his imagination begins to spin.  He can literally put together a feast by using all the various items which have been abandoned in our frig.  Needless to say, I like to work around him as there is always something to learn or a new taste to discover.”

The food: Zeta was the coach, Fabio the student who made a big patch of Ligurian pesto with guidance from the chef.  They wanted to share their creation with friends, hence the lunch party.

The French are obsessed with food — Italians perhaps even more so.  Most Italian men cook, Fabio told us, as he checked the boiling pasta for texture.  “A 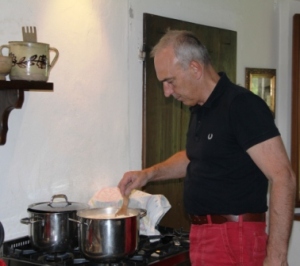 big part of the day is based on food,” he said.  And, it  is essential that ingredients  be of top quality, he explained.  He claims that Victoria  is “thankful to me for showing her the true secrets of Italian cooking improvisation.”

A refreshing cocktail, a combination of Campari, white wine, Prosecco, and Schweppes, got  the afternoon of to a festive start.

The meal began with fresh ricotta, so creamy and delicate, served with homemade mango chutney and caramelized figs with balsamic vinegar.  The cheese was locally produced, and it was exquisite with the tangy chutney and figs.  There was a platter of prosciutto from the local butcher who cures it 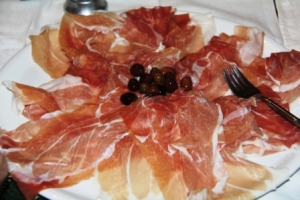 himself, we learned.  And a salad — greens, tomatoes and  luscious mozzarella di Bufala with pungent olive oil from Puglia and black salt from Cypress.  The main course:  trofiette, a  Ligurian pasta,  with the pesto which had been prepared with pecorino.  “Never use parmesan,”  insisted Fabio.

This was followed by a bowl of spaghettini  with the same pesto.  The flavor of the pesto changes with the different type of pasta, we learned.  It seemed hard to

believe, but it was true.  I preferred the pesto on trofiette, others liked the spaghettini  version.  This initiated an animated  discussion of the difference between trofiette and trennette, another type of pasta… Food is definitely serious business in Italy.

For dessert, aged Sardinian pecorino and pears. “It’s hard to get good pears…these are organic from Trentino… Never tell a farmer he has good cheese.  Then he will eat it all, ”  said Riccardo. The cheese was knock-your-socks- off strong.  I loved it, but it was too much for Bob.    He had several  helpings  of the  perfectly diced fresh strawberries that followed.  This prompted Fabio to tell of his

grandmother’s fantastic crop of strawberries in 1986, the year of the Chernobyl disaster.  A boost from radiation?

He went on to relate more engaging tales of his grandmother, a remarkable woman who  “was a very special person to me.”   She lived through two great wars,  suffered the tragic deaths of several family members, but was always a positive and smiling person, Fabio recalled.  “She was the oldest car rally driver in 1996 at the age of 95.  I was the only person brave enough to be her co-pilot.”’

We drank Fabio’s Pinot Grigio, followed by a strong red wine called Stroppolatini, then a Sud Tyrol Kerner as an after dinner wine.  Some indulged

n a rare 45-year–old herb Grappa to top off the meal.  There were also chocolates, courtesy of Riccardo who brought them from a special shop in the Dolomites.

All the ingredients for a magical afternoon:  lively ambience,  fascinating personalities, excellent food and  amusing, entertaining, educational conversation  covering  everything from religion and politics, to the economy, movies — and food of course. 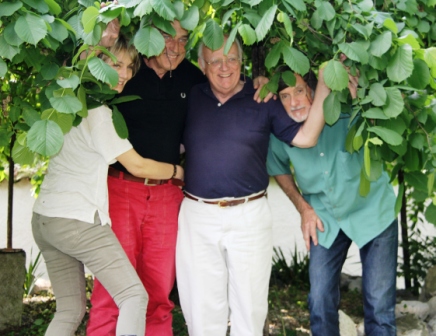 11 thoughts on “A magical meal in Italy”