The Germans have a saying, Leben wie Gott in Frankreich, (Live like God in France). After living and working in Germany for more than 25 years, I moved to southern France eight years ago to see just how God lived.  Not too shabby.  Life is good, very good, but not quite paradise.  Read on for my observations.

Topping off the list of pluses is Health Care.  Americans can criticize socialized medicine all they want, but I’m thrilled with the French system, universal care, which even covers home visits, taxi trips to doctors for those unable to drive, weeks in a rehab facility after some surgeries and much more.  For details, see my previous blog post,  “My New French Knee, “ all about my recent experience with knee replacement surgery.

Filing Taxes. My husband does ours.  Since our retirement income comes from the U.S., we file and pay U.S. taxes.  There is a reciprocal agreement between the U.S. and France, so we pay no income tax here. Nonetheless, as residents in France, we must fill out French tax forms.  My husband spent many long days on the computer, fighting with form after form, to file the U.S. taxes.   The French form, even for citizens, is short and simple.  I did it in minutes.

Elections.  During the French presidential campaign this spring, there were televised debates among candidates, as well as spot commercials.  But, each candidate was given the same amount of air time.  No matter how much money a candidate had, he/she could not buy extra television time.    The issues, the candidates’ positions and record, determined the outcome – not their wallet.

Food/Wine.   Both hard to beat.  Crusty baguettes, flaky croissants, sinful pastries… and, my downfall, all the fabulous cheeses.   Restaurant meals are 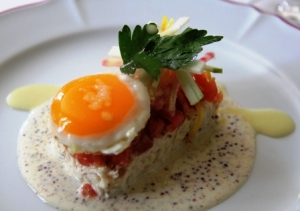 generally excellent, and the wine is reasonable and good.  A glass of wine at our neighborhood café, 3 Euros, ($3.65).   As my husband and I like to imbibe with dinner at home, we buy table wine in five-liter boxes (almost seven bottles), from 13 Euros or $16 per box.  And, we love to visit the numerous wineries in these parts for tasting and purchasing.

Tips Included.  No need to get out your calculator and figure out what 15 or 20 percent of the total is for your tip.  Service is included in French restaurants.  If you are happy with the meal and service, you can leave a few extra Euros.

Politeness.  The French, including children, are extremely polite and courteous.  When entering a shop, a doctor’s waiting room, an office… they greet everyone with a “Bonjour Mesdames, Monsieurs.”   They also kiss a lot, but more on that to follow.

Laissez-Faire.   Life here is not over regulated.  If you visit a tourist site at the edge of a high cliff, for example, there will be no fences or walls at the edge obstructing your view and keeping you from falling. It’s up to you to use caution and control your children.

Leisurely meals. The French appreciate good food and conversation.  Meals, which consist of several courses, are not eat and run affairs. They can go on for hours.  It’s enjoyable and relaxing.

There’s more I love about life here: the beautiful view of the Luberon hills from our balcony, the bounteous markets, colorful local festivals in the summer, poppies in the spring, lavender and sunflowers in the summer, the sunshine, the pool…

But, not all is perfect.  At the top of my list of pet peeves are Business Hours  which drive me crazy.  Every shop, office, restaurant… has its own schedule.  You need a spread sheet to keep track of it all, but be prepared for changes.

Here in southern France, almost everything closes for a long lunch hour, but how long? The bakery and grocery store in my small village are closed every 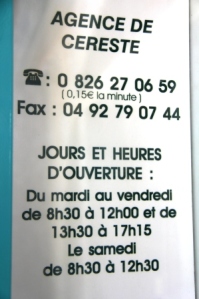 afternoon between 12:30 and 4 p.m. The post office only closes between noon and 1:30 p.m. The pharmacy is closed from 12:30 to 3 p.m., plus Saturday afternoon and Monday morning.  Restaurants are usually closed one or two days a week, but that varies with seasons.  How to remember which one is closed which day during which season.?

What really gets me is “Fermeture Exceptionelle” (exceptional closing). Too often  I have  made a special trip to the bank in a nearby town only to see this sign at the door.  No explanation. Go home and come back another day.

Driving Expenses.   Gasoline is very expensive here – about 1.6 Euros per liter (about $7.80 per gallon). Tolls on the autoroute are also expensive.  But this can be an advantage.  Only during peak travel seasons (certain summer weekends for example) are there traffic jams on these super highways.  You can usually sail along at a maximum speed of 130 km per hour, just over 80 mph.

Hunting Dogs.  As an animal lover, it grieves me to see how these dogs are neglected and abused.  Hunting is a popular sport in these parts, and most dedicated hunters keep several hunting dogs penned up year round. They are not treated as pets and are only released for the hunt.  Many get lost and end up homeless.  We once found a lost, friendly hunting dog wandering along a country road. We put him in the car and called the number on the collar it was wearing, then  met the owner in a nearby town.  Instead of being happy to see the animal, he grabbed it by the collar and tossed it into the back of his pick-up with several other sorry beasts.  I was devastated,  and regretted returning the poor dog to a miserable existence. 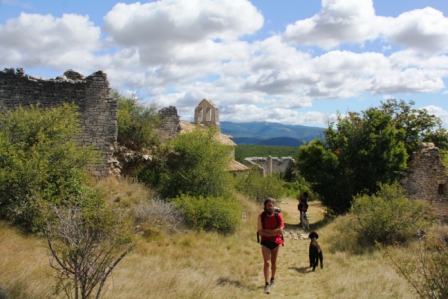 Punctuality.  This is strange.  If you invite French to your home, they generally show up on time.  But, go to an event, be it a concert, a performance, or a community dinner, and be prepared to sit and wait at least a half hour, and more often up to an hour, before the show gets on the road.   If it’s a performance, you may need to stay an extra half an hour for curtain calls.  The French are overly enthusiastic and reward performers with endless clapping and cheering.

Much about the French lifestyle is neither bad nor good, but  curious to an American.  I’ll start with la bise (the kiss).  It’s known that the French greet one

another with an air kiss on the check, usually both cheeks, and sometimes more depending on which region of France they live in.  I live in the department of Les Alpes de Haute Provence,  just 20 minutes from the border of the department of Vaucluse. On our turf, it’s one kiss on each cheek.  But, in Vaucluse, it’s three kisses, both cheeks, then back to the starting point for a final kiss.  I invariably forget when I visit friends in Vaucluse and pull away after two kisses, only to have the friend, cheek turned, waiting for number three.  Then there’s dilemma of which side first.  How many times have I knocked heads with someone as we both turned in the same direction and crashed?  The good ole American hug is easier.

August This is a mystery to me, but it seems everyone, and not just folks with school aged children, takes a vacance  (vacation) in this hot summer month.

Doctors’ offices are often closed for the month.  Many businesses and offices, including the electric company, close during August.  For those of us in the sunny south, August, as well as July, means an invasion:  Parisians, Dutch, Belgians.  Too many drive huge campers which clog the two-lane roads in this hilly region. Parking places in towns are at a premium. Lines at the bakery snake out the door and  down the sidewalk.  We’re happy when these tourists go home and life settles back to quiet normalcy.

Apero,  short  for aperitif and the French preferred way of entertaining.   They often invite guests for apero, which can be potato chips, peanuts, and several glasses of wine or pastis (the favored anise drink of Provence) or an array of elaborate snacks which can be a meal.   In general, dinner parties are for close friends and family.

I could ramble on, but suffice it to say that God could do worse, much worse. 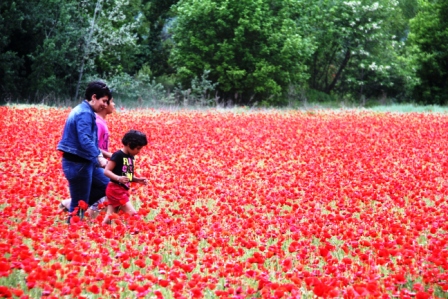 What to do with all that summer produce?  Check out my recipe for Great Gazpacho, my summer favorite.  Scroll down the recipe column at far right.

15 thoughts on “All about Life in France”