Masses of people. Pouring through the squares. Walking four and five abreast on the sidewalks. Strolling almost body to body on the popular, wide pedestrian street, Istiklal Avenue, on a Saturday evening.

Istanbul 2012, home to 17 million and booming. I’d been to the city twice before,

but long ago. The changes, the vibrant pulse of round the clock activity, choking traffic, five-star hotels and designer shops –all overwhelming.

My recent visit was with the Ski Club of International Journalists (SCIJ, www.scij.info). We were en route to our annual meeting, this year held on the slopes towering above the city of Erzurum in far eastern Turkey. Some 200 skiing journalists from 30 countries met to ski, race, party, and learn about this dynamic country from distinguished speakers.

Some of the facts:

• Fifty percent of the Turkish population of 75 million is under 30.

• There are more than 25 universities in Istanbul 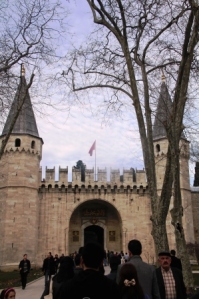 . • One million people visited Turkey last year – the country ranks 7th in the world in number of visitors.

• Turkey has been a model for the Arab Spring, a secular democracy with a Muslim population.

• Turkey is the sixth largest economy in Europe, 16th largest in the world.

The  media are thriving with some 1,000 daily newspapers, 100 television channels and two billion Internet users.

• But, all is not rosy. Freedom of the press is a hot issue.  Between 50 and 100 journalists are said to be in jail for being critical of the government.

• 69 percent of the population wants Turkey to join the EU.

As one of our speakers said, “Turkey is the new kid in town.”

I arrived in Istanbul a day early and spent an afternoon at the Grand Bazaar, a shopper’s Mecca with hundreds of shops and stands offering gleaming gold jewelry, silver jewels, carpets, scarves, ceramics and more.  Before setting off to the mountains, the group  visited Istanbul’s star attractions: Hagia Sophia  Museum, the Blue Mosque and Topkapi Palace.  A Bosphorus  cruise is a must

for an Istanbul visit.  We were blessed with warm sunshine for our boat trip on this 30-kilometer stretch of water which connects the Black Sea and the Marmara Sea and separates Europe from Asia.

We savored excellent cuisine. Turkish  Meze, small plates served as appetizers, are different and delicious, often seasoned cold vegetables, such as eggplant, zucchini, peppers… as well as stuffed grape leaves, cheese and a yogurt-garlic sauce for dipping.   Kebabs of beef or lamb are a frequent main course.  Baklava is a favorite dessert. 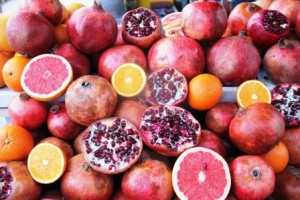 Not only a fabulous dinner, but over-the-top entertainment,  was a highlight when we dined beneath the streets of Istanbul in an ancient cistern which was constructed in the 5th century and is now used as a venue for special events.  A well-known Turkish clarinet player and his band played non-stop for more than an hour and a half – an incredible performance.  Then came the country’s famous belly dancer, Asena, whose sexy slithering  and amazing body movements were mind boggling.

For me, the best of Istanbul was the hamman or Turkish bath,  a soothing multi-step ritual which leaves you feeling ultra clean and relaxed.   For the bath, we visited the historic Hurrem Sultan that dates back to the 16th century but was restored in the 1950s.  There are separate sections for men and women.

The surroundings are opulent – all white marble under a  domed ceiling pierced with tiny windows to let in light.  Each bather is assigned an attendant who first pours warm water over your naked body.  The water is scooped from a basin under bronze faucets into embossed bowls –very classy.    This goes on for some time, then you are led to a large room where bodies lie on towels in a circle under the grandiose ceiling.  The attendants whirl a large cloth bag though the air, then, starting at the top of the bag, squeeze it until soap suds come out the  open end at the bottom— mountains of white foam.  The bodies soon look like mummies buried under mounds of cotton candy.  The attendant  gently massages the suds into the body from head to toe.  It’s glorious.  This is followed by an entire body scrub down with a rough mitt to  remove dead skin.  Then, more pouring of water, all ending with relaxation in a chaise lounge and a glass of rose hip tea.  I liked it so much, I went for a repeat performance at our hotel in the mountains.  There the surroundings were not quite as posh, but the experience was equally as  heavenly.

For most of our group, the best part of the trip was no doubt the skiing – and theobligatory races (giant slalom and cross country). But, as I have a knee which is worn out  (replacement surgery scheduled for May), I spent almost no time on the slopes.  I had relaxing days at the hotel, and, in addition to the hamman, took advantage of the swimming pool.

Nation’s Night is a SCIJ tradition.  Participants bring delicacies from their

countries to share with the others.  Airline restrictions make this more and more challenging, nonetheless the variety of food and drink offered is a tribute to the determination and innovation of these skiing journalists.  Foie Gras from France.  Raclette from Switzerland.  Pasta from Italy… and Thanksgiving turkey  for a meeting in Turkey from the US. 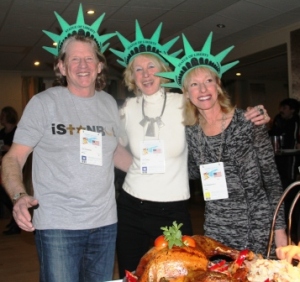 The turkey was the idea of the U.S. team captain, Risa Wyatt.  Customs regulations prevented bringing turkey from the U.S., but the hotel did a commendable job of roasting two large birds.  I made and brought cranberry chutney to serve with it.  The beverage:  Wild Turkey.   It was a sensation.

We even had one bird leftover which we served at the end of the cross-country race, along with the legendary Dutch pea soup,  the latter a popular tradition prepared every year, with much difficulty, on site by our colleagues from Holland.

Unfortunately the trip ended on a sad note for my  Irish friend and roommate Isabel who broke her arm on a bad fall the last afternoon.  She had to have surgery in the hospital in Erzurum. The Turkish organizers of our meet, the hospital staff and Turkish Airlines treated her like royalty.  But,  now that she’s back home in Belgium, she has learned that mistakes were made during the operation and it must be redone.

She’s depressed and says she won’t ski again.  Skiing has been my passion, and  I am worried that a new knee may not permit me to get back on the slopes.  I told Isabel we must both give it a try – maybe sticking to the gentle slopes.  Next year SCIJ will celebrate its 60th anniversary in the Italian Dolomites – something not to miss.

For more on Turkey, see www.goturkey.com.  For more on the Ski Club of International Journalists, see www.scij.info.    See  “Poached Chicken Breasts with Arugula Pesto Sauce” for  a chicken recipe with a bit of green for St. Patrick’s Day.    Watch the slide show to follow.

9 thoughts on “Turkey: from Istanbul to the ski slopes”