The name is perfect:  La Table du Bonheur (Table of Happiness).   The culinary creations prepared by chef Hans would make anyone happy.

“The main reason I cook is to make people feel good, to feel happy. I like to give them something nice to remember,” says Hans, who sports a perfect

handlebar mustache and speaks five languages.  With his wife Tiny assisting, this chef extraordinaire creates over-the-top meals for guests at his Bed and Breakfast home, where he also rents a vacation apartment.  And, sometimes he cooks for lucky friends.

Thanks to Ben, a Dutchman who was in my French class, I heard about Hans and Tiny, who are also Dutch.  Ben wrangled an invitation for me and Bob.  We’ve been back many times since, and I’ve  even gotten up enough courage to invite them to dinner.

A recent dinner chez Hans and Tiny began with smoked wild salmon (he smokes the salmon himself) and  wild salmon tartare. This was followed by cepe bouillon, then an incredible main course,  a trio of succulent lamb: filet,

brochette and a lamb burger with tomato sauce accompanied by ratatouille and a gratin of potatoes  For décor: an edible nasturtium blossom.  Then a beautiful cheese course, a blanched apricot split and filled with layers of fresh goat cheese all smothered with warm lavender honey. Dessert: lemon custard pie with homemade raspberry sherbet and whipped cream.   We were indeed happy.

Table du Bonheur is high in the hinterlands of Provence, up a narrow windy road, then down a rutted dirt road to a cluster of no more than six buildings. Remote.  Off-the-beaten-track. At the end of the world.

Which is just the way Hans and Tiny like it.  “The only way you’ll get me out of here is in a coffin,” says Hans.

For 18 years, he ran a Michelin two-star restaurant in Belgium. “It was very difficult.  Twenty-six people on the payroll.  One hundred forty places.  I felt like a slave,” he recalls.

His restaurant career started when he was 22 and went to work as a waiter.  He knew he wanted to move up, so he earned a wine diploma.  “I wanted to be creative,” he says, so he began working as an apprentice with restaurant chefs, including Les Freres Troisgros who have a Michelin three-star restaurant in Roanne,France.

At the age of 27 he started his own restaurant which, after 18 years,  he was happy to give up and move back to Holland and embark on something  smaller.  “Most people want their career to get bigger and bigger.  I want smaller and smaller….I said at the age of 55 I would give this up.”  For years, he and Tiny and two of their sons (they have three children) ran a small but very popular restaurant with an open kitchen in Holland. “It was great to have people around me,” he says.

They loved France and spent every vacation touring the country by motorcycle.  They knew they wanted to end up settling here.  One summer when they were looking for a vacation  apartment to rent, he told the real estate agent he wanted someplace so isolated that he could cook naked.  The agent took him to a nudist colony — not what he had in mind. 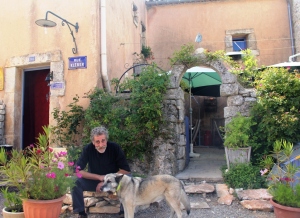 However, he could no doubt cook naked at Table du Bonheur. They discovered their home in the boondocks on a trip in 2000.  They rented the house which dates back to the 1500s. The isolated location was ideal, and the house had all the room they needed. The owner, however, would not sell.  They came back every year for seven years before they succeeded in purchasing the home.  Hans was 56, one year past his age 55 deadline.

They’ve done major renovation, but the kitchen has kept plenty of old world charm.  So much so you wonder how Hans can turn out such fabulous food in a simple, relatively small, space – the antithesis of a modern kitchen.  The dining

room/living room, with beams, exposed stone walls and a fireplace, is cozy  — the perfect ambiance on a cold winter’s day.  In summer a small terrace area with worn wooden tables and lots of potted flowers all around is an ideal setting for savoring fine cuisine.

Hans has local sources for all his supplies – one farmer for pork, another for lamb, yet another for beef, and one for poultry. Cheese from a local producer.  Fish from the market in Carpentras. In the fall he puts on dinners for the local hunting club whose members provide him with tasty game.

“Everyday is an adventure.” he says, with a twinkle in his vivid blue eyes.   “I love to cook.  I love the creativity of it.”

And, we’re happy to devour his creations!

Check out the recipe in the column at right , Goat Cheese Mousse with Mint Pesto — a winning appetizer.

8 thoughts on “Table of Happiness”