Bob and I indulged in all – and more — during our May visit to New Orleans.
The city is a died-and-gone-to-heaven kind of place for foodies.  There’s Cajun food, Creole food, gourmet French cuisine, soul food, even African and Vietnamese food. There are famous chefs and restaurants and simple neighborhood eateries.  And, cocktails for which the city is legendary.

Eating is just one of the many pleasures this wonderful city has to offer. Food, drink and music are the city’s three muses, we learned, and we experienced them all. 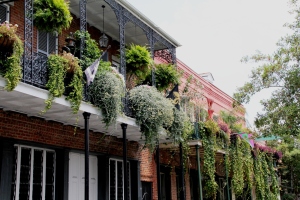 After checking into our hotel, we walked through the French Quarter, past charming buildings with ivy spilling over cast iron balustrades,  bejeweled fortune tellers looking for customers, and street musicians.  We stopped for an outdoor lunch: a hefty Po Boor sandwich (overloaded with shrimp) and a cold beer, and were serenaded by more live jazz.  I was smitten.  My kind of place, New Orleans.

It’s fun, funky, fabulous.  The devastation of hurricane Katrina in August 2005 has left serious scars. But, the vibes in the French Quarter are heady.

In addition to trying different restaurants (famous and not-so-famous), we listened to jazz (on the streets and in clubs), took two bicycle tours, a Katrina tour, an airboat swamp tour, and rode the St. Charles streetcar.

I asked Cassady Cooper , one of our bike tour leaders, what he felt makes New Orleans so special.  “The things you hate about New Orleans are also the things you love,” he said.  “Time doesn’t work here as it does in the outside world.  There’s always something going on here, anytime day or night.  The city is made of artists.  There are more writers here than in any other part of the country.  I love the culture.”

Part of that culture involves alcohol. Where else can you find drive-in Daiquiri stands?  Jeff Shyman, our other bike tour leader, enlightened us.  “Drinking is a big part of this city,” he said.  “We are a drinking culture.  We drink all day, but we don’t drink to stupidity.  We don’t overdo it.  New Orleanians don’t drink to get drunk like the tourists on Bourbon Street.”

We’d heard about Bourbon Street, the place we assumed  was famous for jazz clubs.  No more.  It’s crowded, loud and trashy.  Those seriously interested in music now flock to Frenchman Street where, within a two-block radius, there are eight different venues for 1930s swing jazz.  We liked the Spotted Cat and d.b.a.

For one of our two wheel adventures, we chose the Culinary Bike Tour. We did more eating than cycling, with stops at four eateries to try different delicacies.  Our tour leader explained the difference between Creole and Cajun food.  The latter, he said, is associated with country folk from the swamp lands.  “Table cloths were replaced with newspaper…it’s big dish food, from the field to the table.” Animal parts, such as liver and tail, are savored.  The restaurant best known for Cajun food is Cochon.  Bob and I went there on our own.  It’s both entertaining and delicious.  You can sample numerous bizarre concoctions, all served in small portions.

Gumbo is a New Orleans staple.  On our last tour stop we tried this hearty stew of sausage, seafood, chicken, all heavily spiced, (“everyone uses cayenne for seasoning here,” noted Cassady) at Liuzza’s By the Track, a simple but inviting place.  As I am a passionate cook, I asked our tour leader how to make gumbo. I envisioned serving it at a future dinner party. I’ve reread my notes – page after page.  This is not a 1-2-3 step dish.  I must have had too many beers.   Preparing the roux (the base and essence of gumbo) is a daunting challenge.  And, you need the secret ingredient, file, the powdered leaves of the sassafras tree.  On my last afternoon, I went from store to store in the French Quarter, not known for grocery stores, searching for the treasured file.  I tracked it  down…..  Maybe on a cold winter’s day, I’ll attempt a genuine New Orleans gumbo.

Our swamp tour was a major disappointment.  I had envisioned seeing 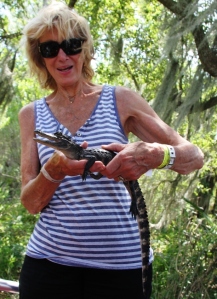 monstrous killer alligators lurking in the bayous.  The few alligators we saw were pathetically puny.

Another story was the Katrina Tour: mind boggling.  Instead of taking an organized bus tour, we hired taxi driver Sidney Farrell to dive us through the parts of the city that had been annihilated.  “Imagine, this was under eight to twelve feet of water,” he said as we drove past a used car lot, Discount Donuts and a motel.  “It’s all coming back, little by little.”

We drove by houses that have been rebuilt, often next door to houses still in ruin.  Block after block.  The Lakeview area of exclusive homes was “all under water,” he said as he pointed out empty lots where half-million dollar homes once stood.  He took us to St. Bernard Parish, a devastated area where Brad Pitt’s Make It Right Foundation Rebuilding New Orleans has financed the construction of ultra modern homes with innovative designs to replace those that were destroyed.

“Ten thousand homes were demolished in three years, but there are still another 45,000 that need to be torn down. The recovery will take another 15 years,” he said. “The city population before Katrina was 500,000.  Now it’s 350,000. Many have never come back.  There’s nothing to come back to.”

The saga is tragic, not just the frightening forces of  nature unleashed and the obliteration left behind, but the foiled bureaucracy and rampant crime that followed.

However, those who have come back, and those who stayed, infuse New Orleans with a gusto that is contagious.

See below for more photos.  Click on the photo to see full size.  Check out the recipe column on the right for a tasty vegetarian dish,  Southeast Asian Squash Curry.

10 thoughts on “The City of New Orleans”