The trees were still bare.  There were more clouds than sunshine. It rained some.  This was March – not April – in Paris, but it was still wonderful, glorious to be in my favorite city.

Thanks to a special offer, we rode in style (first class) on France’s high speed train, the TGV, to the city of light, just a three-hour journey from Avignon. As in the past, we stayed at a delightful bed and breakfast in St. Germain, a convenient, lively and beautiful district of the city.

We visited museums and markets.  We prepared our own lunch at a cooking school. We ate some good – and some not so good – restaurant meals.  We enjoyed a musical at Folies Bergère. We lingered at outdoor cafes.  We rode the Metro.  And, we walked – and walked, and walked.

Our first full day was devoted to museums, six different ones, which is way too many for one day. We concentrated on museums we had never visited on previous trips, beginning with the Grand Palais where we had hoped to view a Turner exhibit.  Alas, the line to see the special collection was long, too long for us.  We 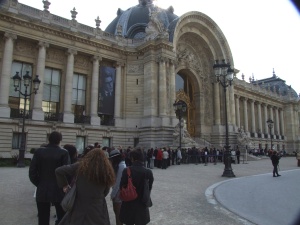 skipped Turner and took in the museum’s permanent collections which involved no wait.  The nearby Petit Palais was next.  The special exhibit there was a collection of 307 haute couture “costumes” by Yves Saint Laurent.   There was also a line, but thanks to my press card, I was able to walk right in. The card would have worked for me with Turner, but not for Bob. As fashion is not big on his favorites list, I felt we could separate and he could take in the museum’s permanent collection (lots of 19th century French painting) while I admired years of Yves Saint Laurent.  Superb.

We headed down the Champs Élysées for a visit to the Orangerie to view the enormous canvases of Monet’s Water Lilies.  We liked the other art on display, lots of Impressionist works, better than Monet’s flowers.

Then over to Place Madeleine for another special exhibit, Edvard Munch at the Pinacothèque de Paris. No line here and the exhibit, entitled “Edvard Munch or the Anti-Scream” gives ample proof that Munch deserves recognition for much more than his famous painting, “The Scream.”

After a late lunch break, we took the Metro to the Marais to visit two more museums, the Musée Carnavalet and the Musée Cognacq-Jay.  By then, we were museumed out.  My fault.  I act as tour guide on our trips, and I overdid it big time.  The Carnavalet, also known as the Museum of the History of Paris, is housed in two connecting mansions from the mid 16th century with objects on display charting the history of the city. We loved the gardens where we took a welcome rest.  The Cognacq-Jay houses the private collection of objets d’art owned by Ernest Cognacq, but we were too wiped out to appreciate them.

Fortunately we saved the Quay Branly museum for another day.  It’s a new jewel, opening in 2006, on the Paris museum scene. A New York Times writer called the controversial building, a jumble of mismatched structures, “defiant, mysterious and wildly eccentric.”   The gardens, an inviting arrangement of reeds and pools and 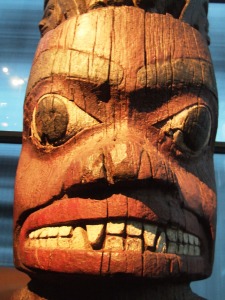 grasses, are exquisite.  No less so are the interior collections, objects and artifacts from Africa, Oceania, Asia and the Americas all bathed in inky light.

Yet another day we visited the small Musée Jean Moulin which focuses on the German occupation of Paris in WWII, the Resistance led by Jean Moulin, and the liberation of the city. It has an excellent film, and was Bob’s favorite in the museum category.

Markets were also on the tour guide’s “to-do” list.  We visited the huge, bustling

Belleville market where shoppers crowd body-to-body in the narrow aisle between the rows of stalls. The merchants, mainly North African, shout out the prices and merits of their products, mainly fruits and vegetables, but some clothing and other items.  It’s chaotic, noisy, but fun.  Far more civilized and tiny in comparison is the Rue Mouffetard market, noted as the “most photogenic” in the city.  The gourmet shops that line this street are as enticing as the market produce. Windows beckon with homemade pastas, cheese, wines, olives and more.

We made two shopping stops.  Bob was bowled over by the basement of Bazar de l’Hotel de Ville (BHV) department store.  It’s hardware heaven – an enormous space filled with anything any handyman ever wanted. We zeroed in on the sign section. “Vicious Pig,”  “Nice dog, mean owner,” “Lunatic Rabbit,” … take your pick, but all in French of course.  We purchased a few in a more serious vein for our guest apartment. Our other shopping venue was the Grande Epicerie de Paris, the sumptuous food hall at Le Bon Marche department store.  Gourmet delicacies from around the world fill the shelves. My kind of store.

Our evening entertainment was usually a restaurant meal, but we did take in a musical, Zorro, at the Folies Bergère. We bought half-price tickets offered on the day of the performance at the kiosk at 15 Place de la Madeleine. The energetic and lusty musical features Flamenco dance, gypsy songs, sword fights, and dramatic scenes with Zorro to the rescue, swinging from a rope.  Good entertainment.

In the meal category, we were often disappointed.  Restaurant meals in Paris are pricier than those in Provence. The dollar is stronger these days, but still not in great shape, so we try to find economical eateries.  The best meal was our splurge at Le Train Bleu in the Gare de Lyon.  The Belle Époque setting is superb: spacious ornate

rooms laden with gilded décor, gigantic ceiling paintings and sculptures. You feel special, and my meal, the TGV special, was indeed that. Foie gras as an entrée followed by perfectly cooked leg of lamb (rosy) with potatoes au gratin, topped off by coffee with a selection of different mini-sized desserts.

The most fun dining was the lunch we prepared ourselves under the direction of a cooking school chef at L’atelier des Chefs.  More on that in my next blog post.

See more photos of Paris by clicking on the Photo Album in the center column.

One thought on “Bonjour Paris”