Bicycle Bob and I recently returned from our annual trek to Germany, a country where we had both lived for many, many years. We chose to move to southern France several years ago when Bob retired.  We don't regret our decision.  We love the climate here.  The food and wine aren't bad either. Yet it's always a delight to trek back over the Alps to Deutschland and savor our favorite things. 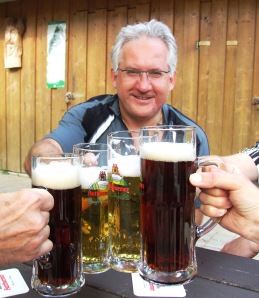 Beer.  Yes, the French make beer, but it's a poor substitute for a frothy Pils vom Fass or an Export served in a large glass mug. One of life's delightful pleasures is getting off your bicycle at a German beer garden on a warm summer's day to sit under an umbrella of green branches and quench your thirst with a cold beer.  Speaking of bicycles — Germany is one of the best countries in Europe for pedaling pleasure.  Civilized trails abound, through fields, woods and villages.

The beer is even better accompanied with a Brezel. I crave those giant, doughy, salty German pretzels.  They are to die for if they are warm and smeared with butter — the way they are sold at many street snack stands or Imbisses.

Another Imbiss favorite not to be found in France is the curry wurst, chunks of succulent wurst smothered in a tangy ketchup curry sauce.  With a plate of frites, it's no doubt a sinful indulgence, but soo good.  Of course, Germany is the mother land of the wurst. Thueringer.  Nuernberger. Weisswurst — three of my favorites that I search out on our return trips.

Move on to the bakery or Baeckerei. Berliners and Broetchen (breakfast rolls).  I can't knock French bread, but those crusty, crunchy breakfast rolls are the best way to start a day.  Yes, I even like them better than croissants.  And Berliners, the ultimate jelly donut.  The French have a go at them, but I've learned they're not worth wasting calories on.

Then the pastry shop or Konditorei.  Those with an adjoining cafe are the best. 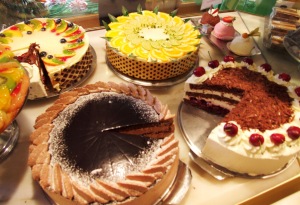 Check out the gorgeous cakes, multi-layered creations that beg for a taste.  Select one and sit down to savor it with a Kaennchen Kaffee — not a single cup, but a whole pot of the rich brew.  This is a uniquely German experience.  There are plenty of cafes in France, and tempting pastry shops — but rarely under one roof.

Germans love ice cream, especially Italian Eis.  It seems almost every town, even tiny burgs, has an Italian Eiscafe offering a multitude of flavors.  Not so in France. French ice cream is OK, but in our parts you don't find that many shops or street stands where you can buy a cone.

In the sping I miss Spargel.  In Germany, stalks of white asparagus are exquisite, inspiring a cult-like adoration with fans standing in line to purchase the seasonal speciality at outdoor stands. You can find white asparagus in France, but it bears little resemblance to those fat, tender spears grown in German fields.  In the summer and fall, I miss all those fabulous German festivals — wine fests, beer fests, church fairs, community celebrations, onion fests, flower fests, street fests — you name it and they have a fest for it.  The food, the gemuetlichkeit, the oom-pah music — only in Germany.  And in December, I miss the Christmas markets.  Yes, the French now have their versions.  But if you have been to a genuine German holiday market with Gluehwein (mulled wine), grilled wurst, spice cookies, marzipan, Christmas carols and nativity scenes, you won't settle for poor imitations.

Fat down comforters, autobahns without toll booths, hotels that include breakfast in the room price — just a few more of my favorite German things.

In praise of France I must add that the acceptance of credit cards almost everywhere here is a wonderful thing.  Not so in Germany.  If you don't have a German bank card, too often you must pay cash.

France is fabulous. The sun in the south is splendid.  If only the French beer were better, the festivals more frequent and more fun, the restaurants more diversified….

One thought on “GERMANY: A few of my favorite things”