The crowds are fierce in this Riviera hot spot in August. And, of course during its famous film festival when the world focuses on all the stars who pose on the red carpet at the Palais des Festivals.

But, you can escape the masses and find tranquility amidst Mediterranean splendor just a short boat ride (20 minutes) away. We visited Cannes again this year to watch outstanding fireworks which are part of an international competition held every summer in Cannes. Fireworks are shot from numerous boats in the harbor and synchronized to music. Worth a trip! 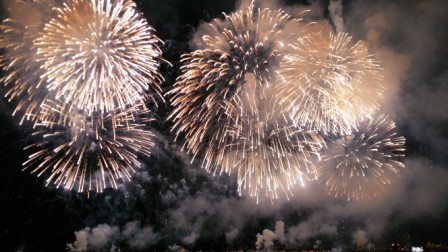 So too is a visit to the off shore islands (Îsles de Lérins): Île Sainte Marquerite and Île Saint Honorat. Last summer we hiked around Ste. Marquerite, the larger island, and savored an excellent lunch on the shore. This time, Saint Honorat, the monks’ island.

Splendid. The tiny island has no cars, no hotels, just one restaurant, two shops –and monks. In 410 AD, Honoratus, a Roman noble who became saintly and sought isolation, is said to have chosen the island, then full of snakes and scorpions and thought to be haunted, as an ideal retreat. Visitors followed. A monastic order was established.

The monastery grew to become one of the most powerful in Christendom. Alas, peace and quiet did not last. Raids by Saracens and pirates in the 8th century took their toll, then later attacks by Spaniards. The monastery was closed in 1788, but reborn in 1859 when Cistercians took it over.

Today 20 monks live on Saint Honorat. In addition to praying, they cultivate grapes, eight hectares of vineyards, five for red wine, and three for white.

We followed the mostly shaded trail along the island’s craggy coastline, past rocky coves, ancient chapel ruins, an 11th century fortress and cannonball ovens. These curious structures were used in the 18th century to heat cannonballs so they would wreck further destruction on the ships they hit.

Signs along the way remind you to keep quiet and to respect the religious ambience – no bare chests. Mediterranean vegetation – pines, herbs, eucalyptus – borders the trail and makes for interesting photos. Other paths lead through the island interior, past the vineyards.

It is truly another world: beautiful, peaceful and quiet. It was hard to fathom that those noisy masses on La Croisette, Cannes renowned boulevard, were not far away.

We stopped to visit the current abbey church and the shop which sold mainly wine. According to a brochure on the island wine, it is “full of spirituality.” All the vintages are named after saints, but you will pay dearly for spiritual wine.   The cheapest we found was 26 euro, but most were far more expensive.

At La Tonnelle , the island restaurant, we each ordered a glass of the monk’s brew to accompany our lunch. A glass of Sainte Cesaire (Chardonnay) for me at 8 euro; a glass of Saint Honorat (Syrah) for VR at 11.80 euro. I found my wine too oaky and too Chardonnay. Vino Roberto’s was good, very robust. To take a bottle home: 33 euro. VR reasoned he could buy several good bottles back in the Luberon for that amount.

The lunch (we each ordered fish) was delicious.   People watching at this seaside eatery also gets high marks. Pleasure boats cast anchor off shore. A tender ferries passengers to the restaurant, a constant parade of the yachting crowd.

Trip Advisor led me to the Hotel l’Olivier in Cannes, a small, family-run (22 rooms) hotel on a hillside overlooking the Med.   Our room was tiny, but our terrace with a superb view was perfect. The hotel personnel were all very warm, welcoming and helpful. It was a bit of a walk to the town center, but good exercise. The hotel has a small pool, flowered terrace for al fresco breakfast, and it’s quiet – a great escape from the chaos of La Croisette. A beach is also nearby. http://www.hotelolivier.com

Another Trip Advisor find, the Bistrot Saint-Sauveur in Le Cannet, a town above Cannes, where we had an excellent lunch. www.bistrotsaintsauveur.fr

A leisurely saunter around the island takes about 1 ½ hours. Boats to both islands run about every hour during summer months. Round-trip ticket to Saint Honorat, 14 euro (price for seniors). More information www.cannes-ilesdelerins.com

8 thoughts on “Cannes: Far from the Madding crowd”