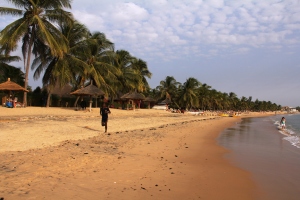 We wanted a winter vacation. Since my days on the ski slopes are about over due to decaying knees, the sun and sand were appealing. A young woman at a travel agency suggested Senegal.  Senegal? We’d never have thought of this African country, but it’s in former French West Africa (Senegal became independent in 1960), and its beaches are popular with the French.

We just returned from two glorious weeks full of leisurely days at the beach, fascinating excursions, challenging bike rides, and the grand finale: attendance at a local wedding.

This was a charter package trip, and it got off to a rough start with numerous flight delays and arrival at the chaotic Dakar airport in the middle of the night. A bus took us from Dakar to our beach resort in Saly, about a 1 ½ hour trip.  Arrival time: 3 a.m. The hassles of 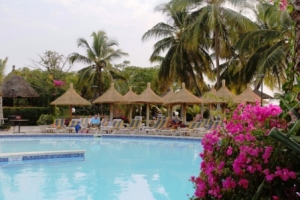 the voyage were quickly forgotten later that morning when we awoke to a paradise of sunshine, palm trees and bougainvillea.   Breakfast (as well as all meals) was served pool side.

During our sojourn, I especially loved the beach and long swims in the calm Atlantic. Bob only went into the water once during our entire stay, and then only briefly. Water temperature varied from 20 to 23 degrees Centigrade, too cold for my delicate husband.

We wanted to experience more of Senegal than pristine beaches and the comforts of our lovely hotel compound. The contrast between the hotel world and real Senegal (Third World Africa) is mind boggling.  Our first outing was to Dakar and the island of Gorée. For this we opted to take a taxi with a guide/driver instead of hopping on a tour bus.  It may have been a mistake.

We learned a bit about the culture talking to Demba, our driver. Most Senegalese speak French, in addition to their principal native language, Wolof.  There are also five different ethnic languages.

Demba, 31, has three children and a fourth on the way.   He is Muslim, as are most Senegalese.  “It’s our obligation to have lots of children,” he said.  He only has one wife, but when he has more money, he plans to take a second.  Muslims are permitted to have four wives. “There are too many women in Senegal,” he said.  “If a man has only one wife, too many women will be left alone.”

From Dakar, we took a ferry to Gorée, the “slave island,” where we visited the remaining Slave House (originally there were 29 such

houses) which has been preserved as a poignant reminder of Goree’s role as the center of the West African slave trade.  Thousands were chained and held in small cells in these houses before being loaded on ships for the voyage to the New World.  A local guide provided grisly details of their captivity and treatment. It was haunting.

Back in Dakar, Demba plunged his ancient white Nissan into the thick of city traffic to drive us past monuments and important buildings. You would not want to drive in this city. It’s a free for all, truly a mad house with salesmen and women peddling everything from glass bowls, sunglasses, socks and clocks to monopoly games and antennas as they circulate among the creeping cars displaying their merchandise.  A crazy highway bazaar.

The ride back to Saly was even crazier.  First, there was a flat tire.  Then the car overheated. No problem. Demba fixed these annoyances, but not for long.  Soon more steam was pouring from the engine.  Another stop.  This time after his tinkering the engine spewed out a geyser of hot, green antifreeze.  Demba sought assistance and once again it appeared all was well.  Not for long. Yet again the old motor rebelled.  We wondered if we’d ever make it back.  En shalla, we did.

After that misadventure, we were happy to join the organized tourist excursions on  buses.  But, we weren’t always on buses.  There are

some modern highways in Senegal, but more common are dirt/sand roads full of ruts and holes.  Several of our outings were in vehicles called “6 x 6”,  big open trucks with rows of seats under a roof.  We were jostled, bounced, and bumped through the bush.

Highlights of our trips included several visits to isolated villages where residents live in clusters of  thatched huts.  Women live in huts separate from their husbands.  Seemingly the husband summons the wife of choice to his bedside when he so desires.

The men go off and work in the fields or nearby towns during the day, while the women tend to the children and food preparation.  Children 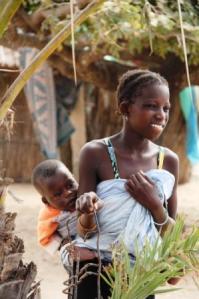 are numerous.  Babies are wrapped to their mothers’ backs.

Wherever we went, even in these remote villages, we were accosted by those selling all manner of Senegalese souvenirs.  Carved wooden figures are especially popular.  It’s a mistake to ask a price unless you really want to buy.  Bargaining is to be expected, but the persistent Senegalese won’t let you get away if they think they can make a sale.  They follow, pester, and relate sob stories about numerous mouths to feed.  Obviously they are poor and depend on sales, but you can’t buy from everyone.  However, we did our part.

Bob (Bicycle Bob) is not into water sports, but he is a fanatic about cycling.  We tracked down rental bikes at a nearby hotel where we joined a guide, Abou, for three different treks. We often had to pedal on roads of sand (tough) and through massive jams of people, horse carts and vehicles in towns. 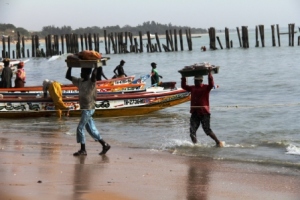 Our favorite trip was to the coastal city of Mbour, a fishing port where we watched  the boats come in. It was an amazing sight of activity with men wading through the water with containers of fish on their heads, women in their brightly colored garb transferring the loads to their heads, then proceeding to a type of warehouse full of enormous piles of fish.

Another day we pedaled to a coastal lagoon where we took a boat ride and saw lots of water fowl, as well as a sacred baobab tree.  The tree is a symbol of Senegal, and can live for thousands of years.  Baobabs have very shallow roots, but huge trunks which store water.  In Senegal, the hollow interiors of the trunks were often used as burial grounds for members of a religious cult, but this practice has been outlawed. During our visit, the dry season, most of the trees had no leaves, but stood out as bare skeletons silhouetted against a blue sky.

Our last night in Senegal was special thanks to Abou who invited us to his wedding. See my next blog for an account of this remarkable event.

For a tasty Senegalese specialty, see my recipe in the far right column for Chicken Yassa.

One thought on “Surprising Senegal” 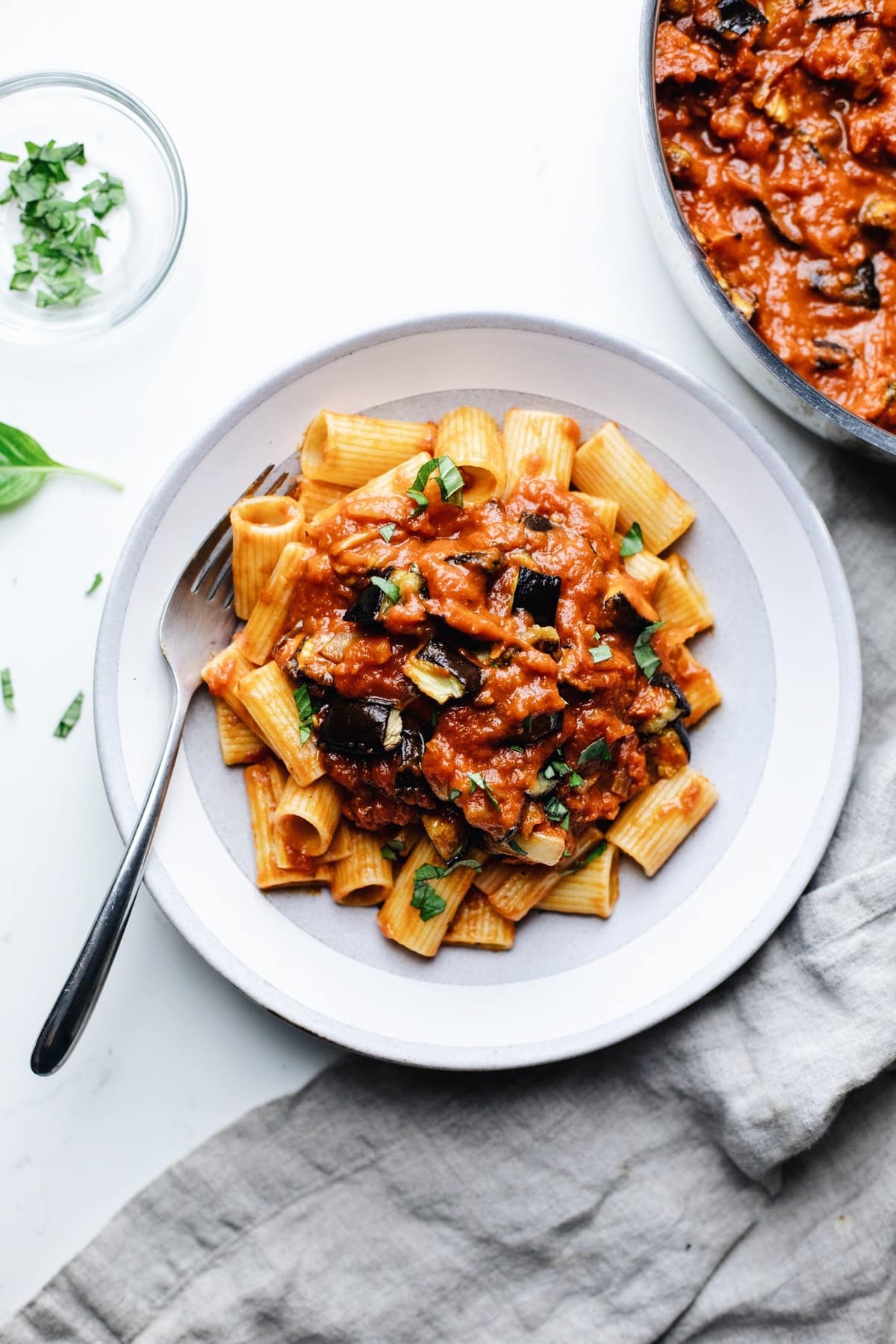