I love Club Med. The love affair started way back in the ‘70s when my friend Irene and I, both late 20-somethings, set off to the Club in Martinique. Fabulous. The next year we tried the Club in Cancun, Mexico. Even better.   Good times were had… even a tad on the wild side, but we were young.

Since living in Europe, I’ve been to several clubs in the Alps for skiing, most recently St. Moritz, Switzerland. Husband VR no longer wants to ski, so I joined my friend Gerlinde from Stuttgart and her son and daughter-in-law, all downhill skiers who have been coming to Club Med St. Moritz for several years.

Although much has changed with Club Med since its earliest days back in the 1950s when it was known as haven for swinging singles, much is the same. 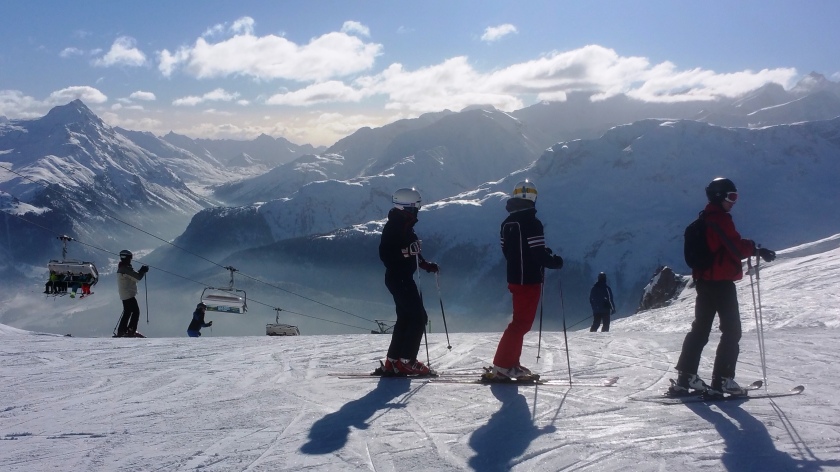 It’s the perfect all inclusive vacation – food, beverages (including wine and cocktails), lodging, use of sports facilities and lessons, evening entertainment – all for one price. Rental of ski equipment, however, is extra.

“You can be here for a whole week and not spend any extra,” said Patrick Franck Oberaspach, the chef du village (manager) of the St. Moritz Club. My only

additional expenses, not including ski and boot rental, were a few cups of coffee in the town, and some special bandages for a blister caused by my ski boots.

Clubs are now family oriented, with many clubs, including St. Moritz, having a Mini Club for children. The kids are entertained, taken to the slopes, given ski lessons. They, and their parents, love it.

And, Clubs are no longer just for the younger set. I was overjoyed to find so many older GMs (at Club Med, originally a French enterprise, guests are Gentils Membres or nice members). I may be old, but there were plenty even older than I. Most, like me, were Club Med repeats.

Patrick noted that during the week I spent there, 60 percent of the 540 guests were repeats. Colette, a woman from Nancy, said she has been coming to Club Med St. Moritz for 40 years. “I switched to cross country 10 years ago. Downhill skiing was too fast. Now I snowshoe,” she said.

Club Med offers rental equipment and instruction in all of the above. Since my new knee performed so well on the slopes last season, I signed up for downhill. Gerlinde, an excellent skier, and I chose group level 4. The Club divides skiers into 6 categories, with 6 being the top for those hard core, off-piste daredevils, i.e. her son Tobias.

We started out with a group of about 10 others, all good skiers and mostly much younger. Our monitor, ski instructor and guide, led us down the perfectly groomed slopes at a fast pace. No breaks for hot chocolate, photos or admiring the scenery. I kept up, but was more than ready for the lunch break at the Club’s mountain restaurant.

After lunch, the monitor mentioned that a couple from the group (older like me) was switching to a slower group 4. Lest I expend all my energy on the first day, I followed. A wise move as the new group 4, all good skiers but most in my age range, did ski a bit slower. A few days later Gerlinde also joined the slower group of senior citizens.

But, we were hardly a group of turtles on the blue, baby slopes. We kept on the move, whizzing down red slopes and even an occasional black run. Our fellow skiers were all very fit. Joggers. Serious cyclists. Cross country as well as downhill skiers.

All had been to Club Med St. Moritz many times. It’s the slopes, as well as the Club, which draws them back. “It’s a very empty ski area which is fantastic in the Alps,” said Patrick. “You usually queue half of the ski day, but not here.” He’s right. No lift lines during my visit. Others praised the meticulous grooming of the slopes.   A cross country skier, who has been coming back for 20 years, called St. Moritz “the best in Europe” for that sport. “The Swiss keep the trails in beautiful condition.”

Gerlinde loves the area for skiing.   “No beginners on the slopes. Few snow boarders. No young, crazy skiers.”

Our ski group was German speaking. However, the club has multi-lingual monitors. In addition to German, there were French, Italian and English language ski groups.

People contact is another Club plus. In addition to skiing with others, you may sit with them at meals, socialize after skiing, join them at après-ski entertainment. Club Med staff, Gentils Organisateurs (GOs) or nice organizers, mingle with guests, dine and party with them.

Gerlinde, who came alone to St Moritz for her first few visits, said, “Even if you come alone you will find friends.”

Back when Irene and I went to Martinique, we quickly found friends and more. Irene signed up for sailing. I went for scuba. We joined a Yoga group. We played volley ball. I participated in a French conversation group. We met interesting people from distant lands. We had fun, so much that we extended our stay for an extra three days.

Club Med is no longer a French company having recently been purchased by a Chinese conglomerate. Patrick does not expect big changes. He pointed out that Club Med has been partners with the Chinese firm for some 10 years. “They guarantee that we can continue as before,” he said.

There are now 70 Club Med villages around the world, including three in China. Future plans call for opening three new resorts each year as well as closing some that are no longer profitable.

Patrick, 42, began his Club career as a ski teacher many years ago on the St. Moritz slopes. “I gave ski lessons to kids who now come with their kids,” he said. 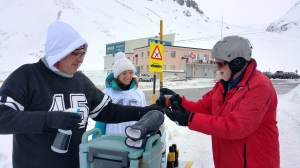 As chef du village, one would expect he’d be busy, but I had to wonder if he ever slept. One frigid morning we bused to an adjacent ski area. Patrick was on hand dispensing hot chocolate — with a shot of schnapps if desired. He greeted guests as they filed into the dining room at dinner each evening. He was the MC and sometimes an actor as well in the after-dinner shows, a Club Med tradition.

What keeps him with Club Med? He has always enjoyed mixing with the clientele. “The Club Med staff don’t stay apart. You discover lots that you would not normally discover. You have lots of interesting conversations. It’s quite enriching to work in this environment.” 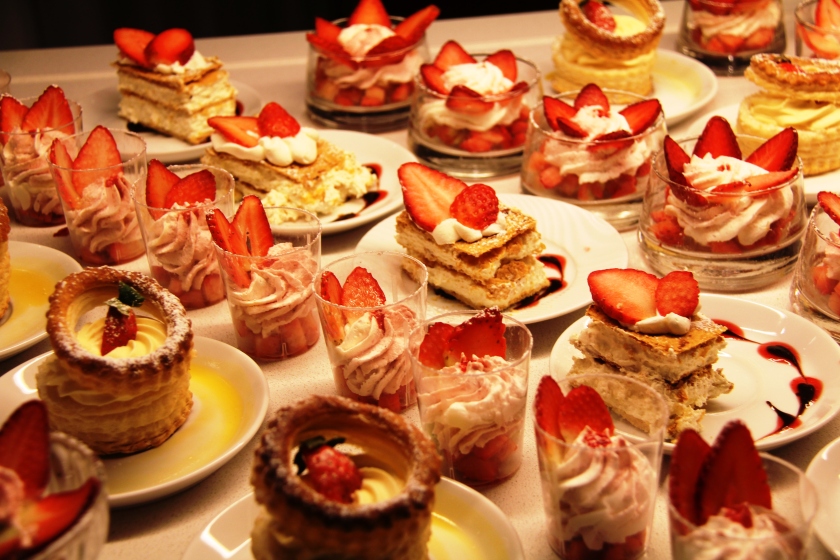 And delicious. Be it a summer or winter Club Med, the food is fantastic, and yet 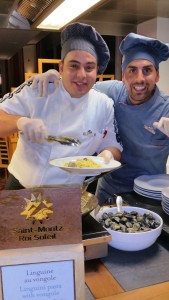 another reason the Club has so many fans. St. Moritz cuisine was amazing. It deserves its own blog post. Stay tuned.

Like my blog? Tell your friends.  Leave a Reply below. Feedback is welcome.