According to the French proverb, “A day without wine is a day without sunshine.”  There’s no lack of liquid sunshine in our lives, nor in the lives of most of the French, as wine is an essential part of life here.   Not far from our abode in the Luberon area of Provence are numerous wineries.  BB (husband Bicycle Bob) and I enjoy treks to visit and taste and buy.

Last week’s all-day excursion to sample  Côtes du Rhône wines in the department of the Gard northwest of Avignon was over-the-top.  Four wineries, lots of delicious reds and whites – plus the famous Tavel Rosé.

French friends Anne and Pascal organized the jaunt, rented a van, and invited us, plus our friends David, Martine and George. (David’s wife Mollie was sick and had to miss the event.)    Pascal hails from the region, and is a fan of its red wine.  He had prepared documentation on the area, as well as each of the wineries we would visit.  Very impressive and professional.

The Gard, as opposed to other wine areas we have visited, is relatively flat.  Vines grow on level ground in chalky soil covered by layers of flat stones which act as heat storage – similar to the terrain of the prestigious Châteauneuf- du- Pape vineyards.   Winters are warm and dry. Spring is warm and wet, while summers, very hot and dry, precede warm and rainy autumns. Mistral winds blow away the risk of disease.  It all makes for excellent wine.

Chartreuse de Valbonne,  an ancient monastery founded in 1203 with its own vineyards, www.chartreusedevalbonne.com,  was our first stop.  Pascal’s mother was a teacher there, teaching the children of the doctors who worked at the hospital for lepers formerly housed in the monastery.  His mother’s family moved 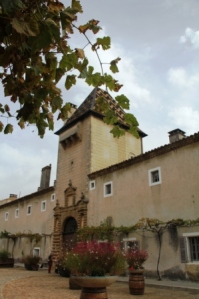 from northern France to the Gard, which was a Zone Libre (free zone), during World War II.

We sipped three reds and two whites.  Martine and I, both fans of white wine, especially liked Terrasse de Montalivet, Côtes du Rhône Village 2011, 100% Viognier.   Pascal said he prefers the white wines of Burgundy, but for red wine, these Côtes du Rhône are his favorites.  He explained that the combination of the terrain and the expertise of the vintners in the region who blend different grapes result in “wines with a special character.”   And, the price is right, not as expensive as other, better known Côtes du Rhône. 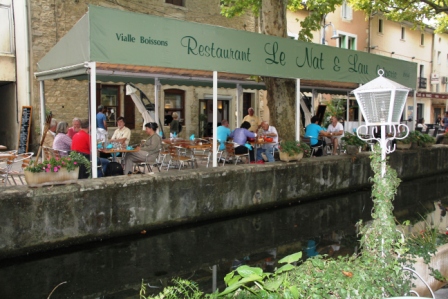 smack in its middle.  We sat outdoors above the clear water where we’d spot an occasional trout.  Moules (mussels) were a restaurant special.  I chose the version in curry sauce, while BB opted for mussels with a chorizo sauce.  Both served with frites and scrumptious.

George and David are serious, professional photographers. Martine, Anne and I also like taking photos.  We all found plenty of photo opps in this pretty, pleasant  town.

More wine awaited at Domaine Pélaquié,  www.domaine-pelaquie.com, a family winery dating back to the 16th century with 85 hectares of vineyards. Some of its wines have the appellation Côtes du Rhône Village Laudun.

The winery brochure states that from father to son, generation after generation, the secrets and knowledge of the soil and the grape vines have been passed on.  But each generation makes its own discoveries to create elegant wines with the distinctive character of this domaine.

Proprietor Luc Pélaquié led us back into the “cave” to taste grape juice.  He filled our glasses from a 6,000 liter steel tank containing liquid from grapes that had been pressed only a few days prior and was just beginning to ferment.   All rated it very tasty and refreshing.

There was plenty of action to observe at the next stop, a co-op winery, Caves des Vins de Cru de Lirac, www.cavelirac.fr  The commune of Lirac has 715 hectares of vineyards producing wines, predominantly red, of an exceptional quality.

Grape harvest was in full swing in the region.  Truck after truck pulling trailers brimming with grapes arrived at the co-op to dump their contents into a vat where they were instantly crushed by revolving blades.  The aromas,  musty and  fruity,  were heavenly. 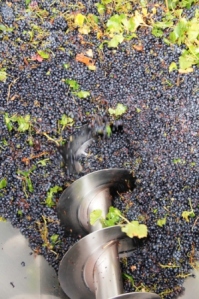 Christiane Bouzige, the winery’s “chef d’exportation,” explained that 60 vintners bring their grapes to the co-op.  Harvest lasts about three weeks when all involved in the business of wine production work seven days a week, almost round the clock.  She predicts that this year’s wine in the Gard will be “very good, but with a small harvest…The grapes are very small…It was very cold in April.”  The co-op sells 36 different wines, ranging in price from € 4 to € 37,50 per bottle.

At Domaine Lafond, www.roc-epine.com, our last stop, we got to taste a Châteauneuf- du- Pape 2009/2010 as this winery has vineyards in the Châteauneuf -du- Pape region. 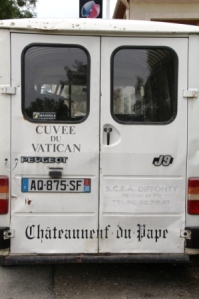 We also tasted a Tavel Rosé, which vintner Pascal Lafond said is a “very different style of rosé than the rosé of Provence.  You can drink it year round, not just in summer around the pool.”

Lafond, another old family wine estate, produces “bio” wines.   Pascal Lafond mans the winery while his 83-year-old father Jean-Pierre keeps the books.  “I have to check to see if he has made any mistakes, “ said Jean-Pierre.

To our surprise, we began our tasting here with a red wine, followed by the rosé, then the white.  We had assumed the order  should be the reverse, but Pascal explained that in this order the true flavors of the white wine are appreciated.  We did appreciate his excellent white, Lirac Blanc 2012, € 9,20 per bottle.

Wines of southern France are richer and more complex in taste, he said. 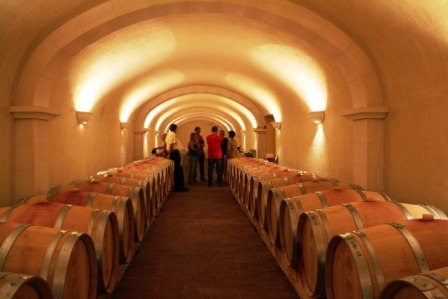 Some of Lafond’s wines are aged in oak barrels for several months.  He proudly showed us his “cave” with long rows of beige colored  barrels which looked new.  He prefers French and Russian oak for his wine storage.  American oak, he finds, gives “too much taste.”

On our way out we walked past stacks of boxes ready for shipping.  Several were labeled “Cascher” (Kosher).  Two rabbis work at the winery in the production of this special wine which is shipped to Jewish communities in France as well as in the US.

That was a healthy dose of delectable sunshine. All returned with several boxes of wine to be assured of sunny days in the winter ahead.  Merci,  Pascal and Anne.

A recipe to try:  Duck Breasts in Balsamic Vinegar. It’s very good and very easy and comes from my Australian friend Meg. Scroll down recipe column at right.

7 thoughts on “Discovering Fine Wines in the Gard”